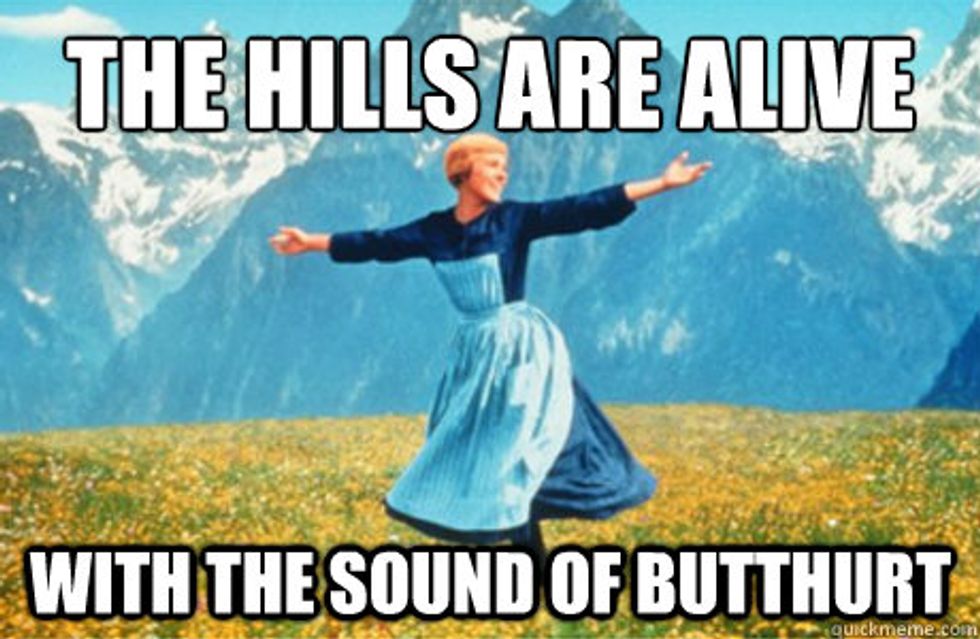 It's a pathetic sound honestly.

North Carolina's Republican governor, Pat McCrory, is having a #sad right now. Everybody is being so mean and calling him a sister-honking redneck for signing his state's insane anti-LGBT law, and all on the same week Georgia's Republican governor Nathan Deal proved he had a much bigger dick-gina than McCrory, by vetoing his own state's shitty "religious freedom" bill.

McCrory is specifically very upset about how a couple transgender dudes and a lesbian and some gaygender organizations filed a lawsuit against his state over its shitty, dumbass bill. How is that even fair? Now, we could write you 1,000 words about why the governor's latest statement is laughable and wrong and OMG WHAT A LYING PUSSY. Or we could just post the statement and a bunch of .gifs of babies crying. Which do you want on your Tuesday? Just kidding, we already know you are illiterate whores.

“The governor respects the right of any legal challenges; however, he does not respect the continued distortion of the facts by the groups challenging this law and by many members of the state and national media,” said Graham Wilson, the governor’s press secretary.

Awwwwwww, you mean how everybody is saying North Carolina is currently run by dumb bigots? That's probably what this baby is saying:

“To counter a coordinated national effort to mislead the public, intimidate our business community and slander our great state, the governor will continue to set the record straight on a common sense resolution to local government overreach that imposed new regulations on businesses that intruded into the personal lives of our citizens. The non-discrimination policies in place today in cities like Raleigh, Greensboro and Asheville and in every business in North Carolina are the same as they were last month and last year.

ACTUALLY, Gov. McCrory, you pathetic douchesqueak, that is a lie. How do we know it's a lie? Because we can read the bill for ourselves!

In case you can't read that itty bitty print, it says, "this Article and other applicable provisions of the General Statutes supersede and preempt any ordinance, regulation, resolution, or policy adopted or imposed by a unit of local government," and so on and so forth.

That means Pat McCrory is a fucking liar. (Or maybe he is a dumbfuck like Indiana Gov. Mike Pence, who proudly signed an anti-gay law he admitted he didn't understand.)

Either way! Know why Official Wonkette Baby Donna Rose is crying? Because babies DON'T LIKE LIARS OR STUPID PEOPLE.

“Where was this coordinated outrage and media attention when the original bathroom ordinance was defeated in Charlotte just last year?

Our bad! Sometimes people are washing their hair that day and they don't hear about all the terrible shit that happens in the news. Makin' up for it now! Here is a picture of Jessie Spano from television's "Saved By The Bell." She is crying.

“The governor looks forward to cheering for the UNC Tar Heels in the NCAA Final Four being played in Houston, a city that defeated a similar bathroom ordinance referendum last year with over 61% of the vote.”

Fuck your butthurt whining, Pat McCrory, and fuck UNC basketball and fuck Houston too. You'll lose in the end, and then you'll be like this: