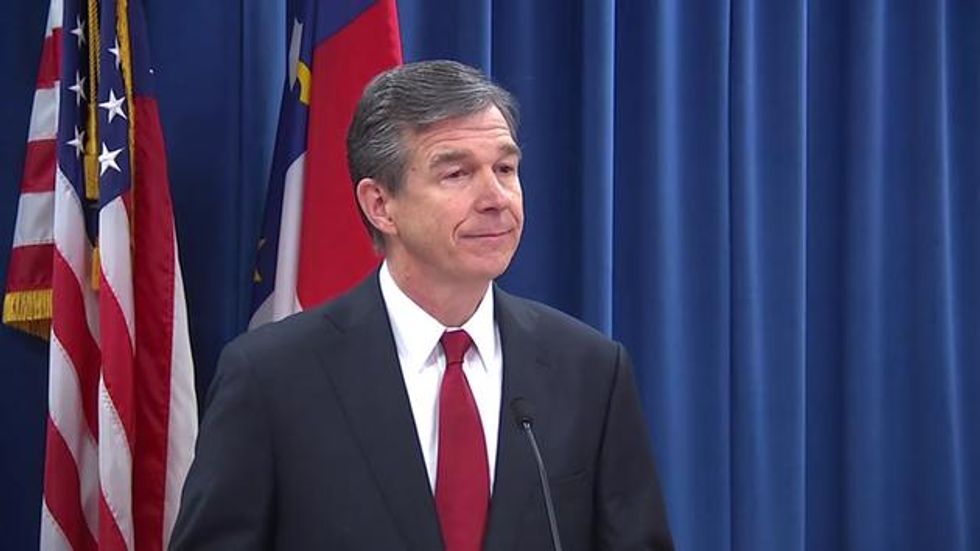 See what happens when you let people vote?

North Carolina Gov. Pat McCrory may have finally, grudgingly conceded the election he lost over a month ago to Democrat Roy Cooper, but that doesn't mean the Republican-controlled state legislature has to accept the outcome of the election, too. In a special session that was ostensibly called to help the state deal with damage from Hurricane Matthew, the General Assembly has been going nuts with a bunch of bills aimed at removing as much power as possible from the new governor, who, did we mention is not even a Republican? Look, they have to do it. They were all elected to do the will of the people, and if the people were dumb enough to elect a Democratic governor, then clearly the people need to be straightened out. Presumably, once the people come to their senses and elect another Republican governor, the General Assembly will put everything back like it was.

After passing a quick bill to provide $200 million in hurricane relief Tuesday, the legislature could have declared their mission accomplished and gone home, but instead, they decided to whittle back the governor's ability to appoint election boards and to appoint trustees of the University of North Carolina, requiring state Senate confirmation for virtually all the new governor's cabinet members, and reducing the number of state staffers the governor can appoint without confirmation from 1500 to just 300. Why? Because they're the majority, and the new governor better not forget it.

You'd be forgiven for thinking North Carolina Republicans don't know the first thing about democracy, or they know all about it and are deathly afraid of it.

North Carolina Democratic leaders are getting all sour grapes about the new measures, which if signed into law by McCrory in the lame duck special session, would keep Cooper from having the full range of powers governors of the state have traditionally had.

“This is an unprecedented, shameful and cowardly power grab from the Republicans,’’ said Jamal Little, a spokesman for the state’s Democratic Party. “After losing the governor’s office, the G.O.P.-controlled General Assembly is attempting to hold on to power that voters took away from them.”

Silly Democrats, that's the whole point! A top Republican in the House, David Lewis, clarified that it's not so much a power grab as a grab for power, explaining Republicans simply wish "to establish that we are going to continue to be a relevant party in governing the state."

The Election Boards measure is especially cute: under the old system, the state's 100 county election boards consisted of two members of the governor's party and one of the opposing party, an arrangement that was very convenient for McCrory when the federal government threw out the state's horrible voter-suppression law. The county boards took up the slack by making voting more difficult for people who might vote for Democrats, especially blacks. The new bill has suddenly discovered the principle of equality, requiring four members: two Democrats and two Republicans. Tie votes, we assume, will be settled by duels or barefoot wrasslin'.

North Carolina voters also elected Mike Morgan, a Democrat, to the state Supreme Court in November, giving Democrats the majority on that body, and there have been rumors that the General Assembly might attempt to pack the court by adding two new seats, both of which would be filled by McCrory before he leaves office. Republicans have strongly denied that they were considering any such thing, perish the thought, although at least two conservative groups were pushing the idea. State GOP Executive Director Dallas Woodhouse issued an angry letter Tuesday blaming the media and state Democrats for the rumors, saying he was

“Some of you did not get this wrong,” he wrote. “But many of you did, by engaging in rumor-filled propaganda with no concrete or real reporting, and a ridiculous standard that no matter how we tried to refute this, it was never enough.”

Likely translation: We'd have gotten away with it if it weren't for those meddling reporters. Woodhouse went on to make some very funny jokes about other things state Republicans aren't going to do, too:

In a Tweet Wednesday, Democratic state Sen. Jeff Jackson said he wasn't too impressed by Woodhouse's finally coming out and promising not to pack the court:

“You can’t criticize people for believing something that you stubbornly refuse to deny – especially when there’s a certain history.” Jackson said.

Just to be on the safe side, though, Republicans did introduce a bill to require Supreme Court candidates' party affiliations be listed on ballots, since some people believe Morgan might have won because voters thought he was a Republican. We are not making this up.

Looks like North Carolina's going to continue to be loads of fun to report on in 2017, even if the state Assembly is somehow blocked from abolishing voting by any party whose name contains the letters "ocrat."