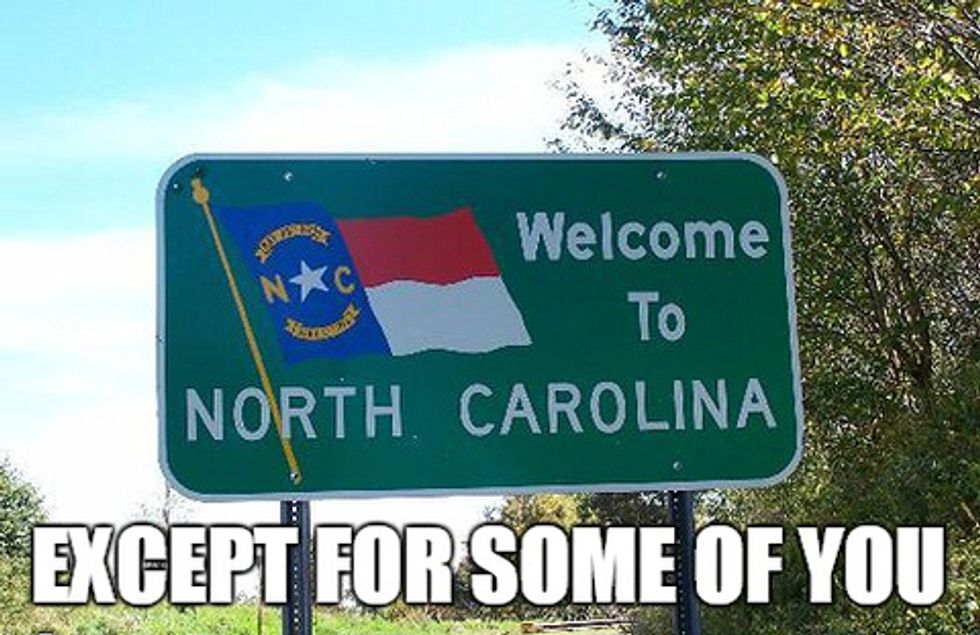 [contextly_sidebar id="JesHNTAUJt8cVZ3Km71hbJIIRp5fMLPn"]We have good news and bad news. Let's start with the bad news. (Shut up, that's how we do.) The super craptastic bill for which the North Carolina legislature held a special session, at an additional cost to taxpayers of $42,000 A DAY, to consider on Wednesday? The one intended to overturn Charlotte's local ordinance that says people can make poops in whatever public restroom they want and it ain't nunya bidness what kinda gear they're packing in their panties? Yeah, the state House and Senate passed that mofo, and super craptastic Gov. Pat McCrory, former mayor of Charlotte so he's got a personal interest in screwing the city over apparently, signed it into law Wednesday night.

Senate Democrats put up a fight, by walking out in disgusted protest.

“We witnessed an affront to democracy,” said Democratic Sen. Dan Blue of Raleigh, the minority leader. “We will not be silent.”

Senate Republicans gave zero fucks about the protest and unanimously passed the bill. But the super extra funtimes part of the new law is that Republicans (and 11 Democrats in the House who can eat a bag of skunk balls) decided to multitask while they were there and added some additional "up yours, homos" language.

The full bill wasn’t made public until Wednesday morning. Until then, it was unclear whether the legislators would target only the bathroom provision, or whether they would go further and strike down the rest of the ordinance. [...]

The bill prohibits any such bathroom flexibility.

But it also will keep Charlotte and any other municipality from adding new protections for gays, lesbians or transgender individuals.

In North Carolina today, there are no legal protections for gays and lesbians. That means a private business in Charlotte or anywhere else in the state can refuse to serve someone who is gay, and a bakery could refuse to make a cake for a wedding of a gay couple.

Is this kind of law to protect bigots' right to discriminate a massive steaming pile of stupid and immoral cow dung? Obviously:

“Discrimination is wrong, period,” he said. “That North Carolina is making discrimination part of the law is shameful. It will not only cause real harm to families, but to our economy as well.”

Oh right the economic thing Republicans are supposedly so good at doing, except for how they are actually terrible at it. Some minor businesses you've probably never heard of before, like Dow Chemical and the NCAA, have clearly stated opposition to this legislation, and it's definitely a good idea to piss off businesses that just might wanna take their business moneys somewhere else. Maybe South Dakota!

We said there was good news, didn't we? Yeah, we totally lied about that. This story sucks a thousandteen ways to Sunday, sorry.