Now Grover Norquist Wants To Drown Republicans In The Bathtub 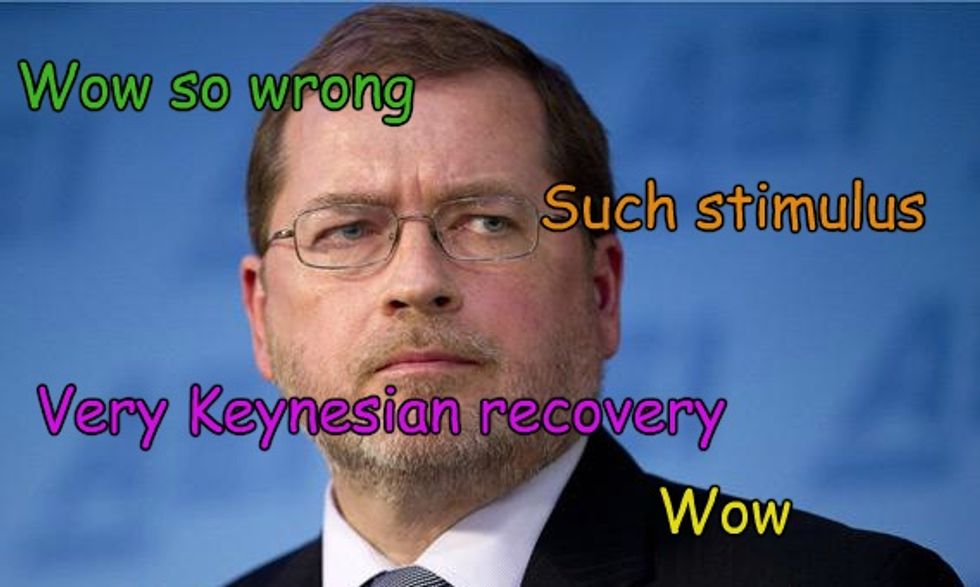 There is an old saying: if you laid all the economists in the world end to end, Grover Norquist would still be wrong about everything. Still, you have to give him a lot of credit (No you don't). In spite of the fact that only 2 percent of economists polled by the University of Chicago agree with him, Norquist is trumpeting his belief that the economic recovery did not come as a result of the economic stimulus act passed in 2009. So what did cause the recovery? Why, the spending cuts caused by the sequester and the continuation of 85 percent of the Bush tax cuts, you silly goose.

And he's pretty cheesed off that the Republicans aren't out there taking credit for it! Sam Stein and Arthur Delaney of Huffington Post have the scoop.

Grover Norquist would like Republicans to shut up about how bad the economy is, and instead take credit for the recovery.

The prominent anti-tax crusader hasn't turned into a bullhorn for President Barack Obama's economic policies; he still thinks they're a drag on jobs and wages. But he's also grown critical of his fellow Republicans for making poor strategic and messaging decisions on several key issues. Rather than tying the economic recovery to spending cuts ushered in by the sequester and to the continuation of 85 percent of the Bush tax cuts, he said, some in the party have insisted their own leaders fumbled those items.

Even Norquist concedes that it’s pretty hard to run on the idea that the economy sucks and then take credit for how well it's doing.

Few in the party have been willing to talk up good economic news, even if only to credit it to conservative-leaning legislation. The preference has instead been to bemoan the president for ignoring longterm deficits and debt, and for pushing "job-killing" regulations [...]

Republicans have probably concluded that a pivot like the one Norquist now envisions may be simply too hard to execute. Still, he wants members to try.

And it probably doesn't help when your Republican economist friends are on Fox explaining why the recovery actually sucks, unlike St. Ronald of Reagan’s recovery, which was the goodest recovery of all. (No it wasn't.)

So what's the real deal and why is Grover Norquist wrong as usual, Danny Vinik writing in The (New) New Republic?

On Monday, Daniel Clifton, the head of policy research for the brokerage firm Strategas Research Partners, tweeted out a graph of government spending that has garnered lots of interest on the right. For instance, anti-tax crusader Grover Norquist implied that the chart, which shows that spending, as a percentage of GDP, has fallen dramatically in the past four years, disproves Keynesian economics.

This is a classic causation-correlation error. Just because the recovery strengthened in the past few years, it doesn’t mean that sequestration caused that strengthening. In fact, the evidence indicates that just the opposite is true.

Vinik goes on to explain that the Great Recession left what was called a "demand gap" back in the Jurassic when Yr Wonkette was in college. A vicious circle is created wherein people are laid off so they stop spending, so demand falls, so more people get laid off, etcetera ad nauseam.

The government’s role in crises like this is to fill the hole in demand and break this cycle. It can either do that through monetary policy, like low interest rates that entice consumers to spend money and businesses to invest. Or the government can do it directly through fiscal stimulus -- by giving tax breaks to Americans to spend money or spending the money directly itself. That’s what the stimulus was designed to do -- and it accomplished its goal.