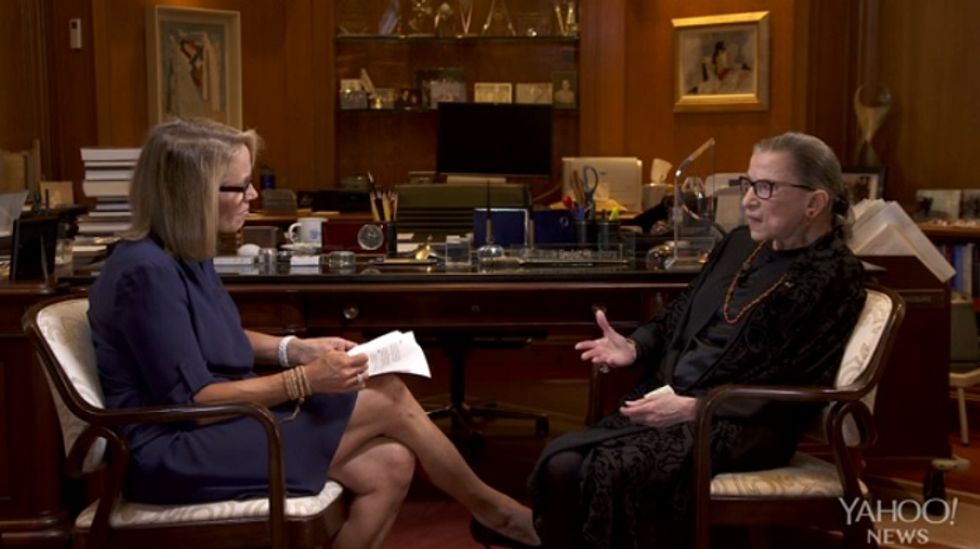 Katie Couric has this hot job doing the online journalisming with Yahoo now, and she spent some time talking with Ruth Bader Ginsburg, who we don't mind saying we are in deep nerdlove with. The interview takes place in Ginsburg's office at the court, which looks a bit too much like a set for "Supreme Court Justice's Office," all dark wood, stacks of books, and memorabilia. There's a sweet moment at the beginning where Ginsburg shows off her collection of (usually) lace collars (orjabots if you're into fancy Frenchy-talk), including a rather fierce-looking beast that she wears when delivering a dissent.

She also has a gift from Barry Bamz: a signed copy of the Lilly Ledbetter Fair Pay act, which quickly passed through Congress following Ginsburg's dissenting opinion in Ledbetter v. Goodyear Tire & Rubber Co., and corrected the loophole that prevented Ledbetter from suing for pay discrimination.

As to the interview itself, it's probably not going to make gigantic news, but it's a terrific chance to listen to Ginsburg explain her judicial philosophy; for the most part, Couric wisely just gets out of the way and lets Ginsburg talk. There aren't a lot of surprises -- Ginsburg repeats her contention that Roe v Wade had a good outcome but a sketchily written decision; she thinks a wiser approach would have been more gradual, overturning Texas's terrible anti-abortion law but leaving the regulation of abortion mostly up to the states, some of which were more liberal than the nationwide framework established by Roe. "And that gave the right-to-life people a single target to move at. And for them, it was a very effective target."

On Hobby Lobby, Ginsburg is especially harsh, saying that the decision allows employers to "foist their beliefs" onto employees who don't share them. She thinks that the five justices in the majority have a blind spot when it comes to women and the law, which will probably get a lot of conservatives going nuts about how she's a wild-eyed radfem or something. She's also hopeful that the dissenting side in Citizens United will eventually prevail, though not necessarily any time soon.

Ginsburg is also quite aware that she has an online fandom, and is well aware that there's a Tumblr called "Notorious R.B.G." (her law clerks had to explain the reference to her, though). She finds it amusing, and yes, she's seen the rap video.

She's exactly as quietly charmed at the whole phenomenon as you'd want her to be -- and says her children and grandchildren get a kick out of it, too. Also, there's a cool question from the blog's founder: If you could write a dissent in a historic case from before you were on the Court, what would it be? (We will not give it away -- you people need to watch videos for yourselves now and then.)

There's a little bit of personal stuff, reminiscing about her late husband, talking about her role model, Sandra Day O'Connor, a fellow cancer survivor who advised her to do chemo on Fridays so that it wouldn't interfere with her court schedule.

And then there's the retirement question, to which she gives a now-familiar answer: "I will do this job as long as I can do it full steam. When I feel myself slipping, when I can no longer think as sharply, or write as quickly, that will be the time to leave the Court."

But should political considerations and the confirmation chances of a potential replacement enter into it? Answer: "I am still here, and likely to remain for a while." So there. We really don't see the point of those who think one of our best Justices should step down because Democrats might lose in 2016 -- the possibility that Ginsburg may die or retire under a Republican is no reason to chuck out a terrific judge. But it's a hell of a motivation to make the Court an issue in 2016.

We will just shut up now and let you watch Ruth Bader Ginsburg, because she's the attraction here anyway. Enjoy!