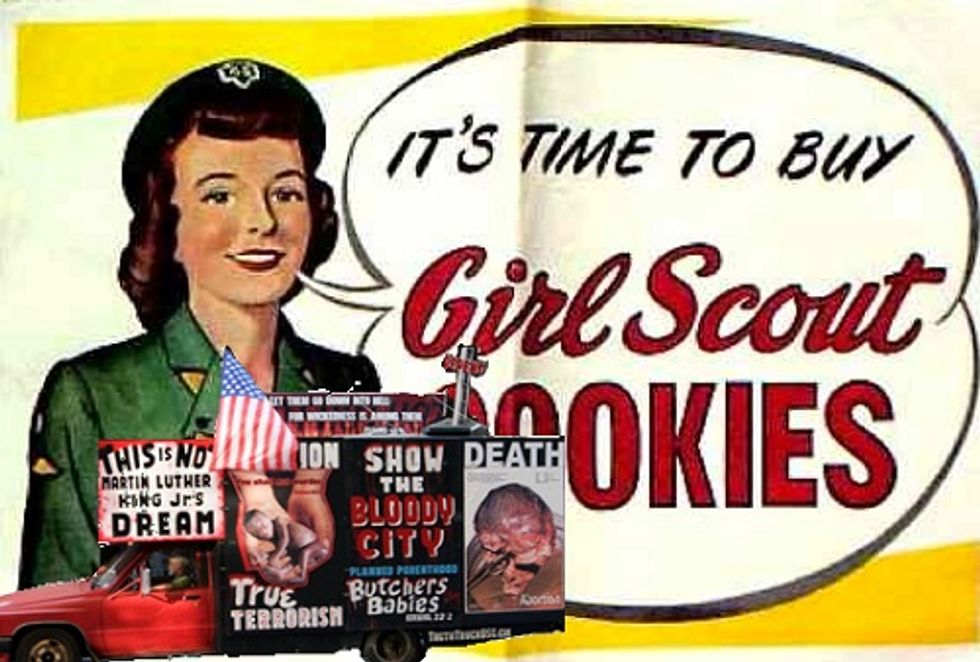 So the last time we heard about wingnuts boycotting Girl Scouts and their delicious Thin Mint Abortion Cookies, it was just crazyColorado radio preacher man Kevin Swanson who wanted to boycott the lesbian abortion terrorists of the GSA. Or at least buy the cookies but cover the Girl Scouts logo with magic marker, because he has no earthly idea what a boycott is. But it turns out that maybe a larger boycott is underway -- honestly, we can't say for sure, because wingnuts are boycotting everything all the time -- in the wake of a completely outrageous act of slaughter and butchery committed by the Girl Scouts. What did the lesbian aborto-terrorists do this time? Oh, America, you are not going to believe the depravity and sickness of what they did! They -- are you sure you're sitting down? -- tweeted a link to a Huffington Post article about "Incredible Ladies Who Should Be Women Of The Year For 2013." And in that piece was BOTH a video in which a young woman said something nice about Wendy Davis, AND a link to a piece that said something nice about Wendy Davis, whom Breitbart horcrux Austin Ruse describes thusly:

Davis is not known for much more than exaggerating her life story and for her filibuster of a pro-life bill in the Texas legislature. Her critics point out that the bill she filibustered was one that limited abortions after viability

And all other abortions, too. But really, the point here is that a single twitter link to a blog post with a link to a list of 25 moments that were "great for women in 2013" in which Davis is described as an "Incredible Lady" constitutes the GSA's "endorsement" of Wendy Davis as Baby Killing Queen of All Girl Scouts. And so, boycott. Also, too, the GSA's faceplace page linked to another article that said nice things about Kathleen Sebelius, who, Ruse says, supports "Obamacare and mandating abortion coverage even for religious entities." Monstrous! The Girl Scouts, of course, have humbly apologized.

In December of 2013, Girl Scouts of the USA shared an auto-populated tweet, asking our social media audience to share their opinions about who should have been recognized in a discussion about 2013’s noteworthy women. While our intentions were good, many of our followers and the public at large raised concerns about the content they were driven to via our social channels. We listened, and would like to take a moment to sincerely apologize to anyone we have offended. We are truly sorry.

To be clear, Girl Scouts has not endorsed any person or organization. As our methods of communication evolve with technology, the mission of Girl Scouts remains the same: to continue building girls of courage, confidence, and character, who make the world a better place.

After all, the Wendy Davis endorsement was simply the last straw; the Girl Scouts have a well-documented history promoting what many consider to be extreme feminism including abortion.

"And if the Girl Scout organization is 'truly sorry,' why is the offending tweet, referring girls to a HuffPo video praising Sen. Davis and abortion rights, still up on GSUSA's twitter page?” she asked.

Clearly, the Girl Scouts are actually in favor of there never being any girls ever again, since they sent out that tweet saying Please Abort All The Babies.

"An apology now, 6 weeks later.....just days before 'National Girl Scout Cookie Day'? Hmmm, wonder if what they're sorry about is the drop in cookie sales," she noted. "Still good on Sebelius as a 2013 woman with 'courage, confidence, and character.' So I guess they only backtrack on the offenses that get widely picked up. Sick.”

When will the Girl Scouts' traitorous "endorsement" (Really?) of prominent women who are hated by the extreme right ever end? Also, thank you, wingnuts, for boycotting something that we are really looking forward to buying extra of. We'll buy their cookies even though they shouldn't have wimped out. Thin Mints and Bortions for everyone!

Follow Doktor Zoom on Twitter. You can take his Thin Mints when you pry them from his cold, dead hands.