Now #Teens Gonna Save The Climate, Earth. WHAT CAN'T THEY DO!!! 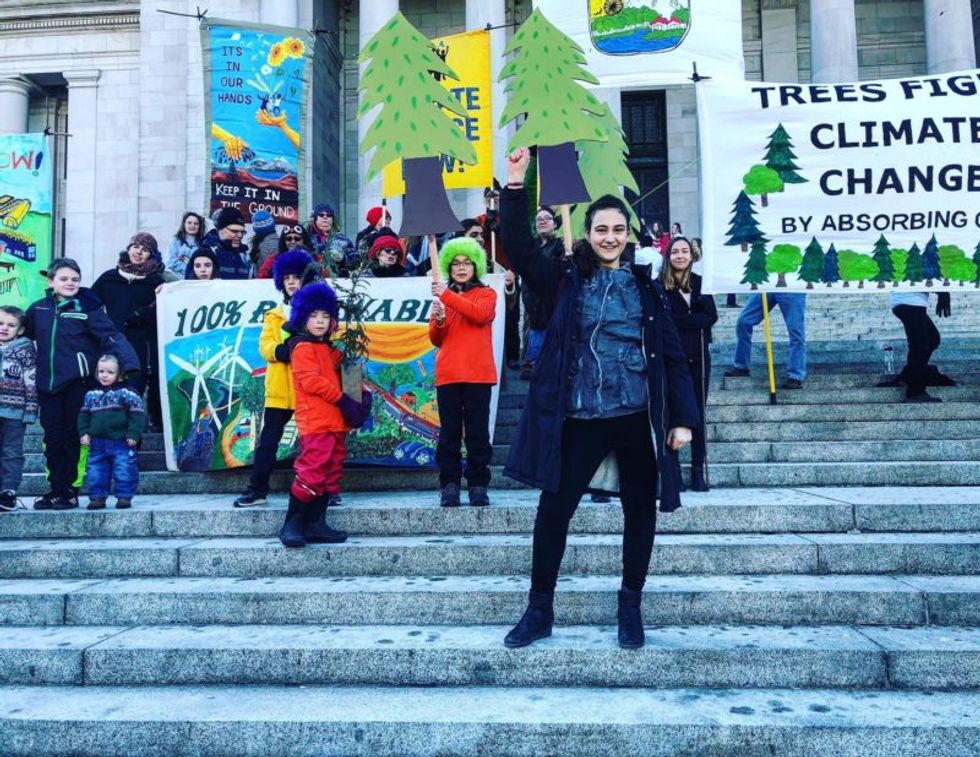 Kids these days... are organizing.

Marjory Stoneman Douglas High School reopened yesterday for the first time since the February 14 shooting in which 17 people died. Just for a half day, and no real academics yet, just a chance for students and teachers to spend some time and tears together. The last couple weeks -- yes, it's just been two weeks -- have been a time of incredibly raw, possibly culture-changing activism by the kids who lost teachers and friends, and that continued this week, as a group of students from nearby Pompano Beach walked 16 miles Monday to meet with kids at Stoneman Douglas and to say Never Again:

Today WE, Pompano Beach High School, walked 16 miles, left at 9:15am and arrived at 3:43 almost 6 hours walk to Marjory Stoneman Douglas High School to speak for the 17 lost lives. ❤️ENOUGH IS ENOUGH AND WE NEED CHANGE pic.twitter.com/tzlOy2M3g4

The kids aren't content to just hope adults will fix things, and they've been pretty insistent that they're not about to let us get away with vague thoughts and prayers. So it should be no surprise that other teens have been watching and working on bringing a similar sense of young-people urgency to another existential threat: climate change. A network of young climate rabble-rousers had already been planning a day of youth climate activism for July 21, anchored by a march in Washington DC, with affiliated marches in other cities.

The ringleader for the "Zero Hour" march is a Seattle 16-year-old, Jamie Margolin, who started planning and networking last summer when the Trump administration announced the US would withdraw from the Paris climate accord.

She recruited Mrinalini Chakraborty, head of strategy for the national Women’s March, to help the students file for permits and plan logistics. Now, the organizing committee includes dozens of youth from Connecticut to California. The official website for the march launched last week.

The march isn't Margolin's only foray into climate activism, though. She's also one of 13 kids who earlier in February filed a lawsuit against Washington's state government and Gov. Jay Inslee, claiming that the state isn't taking aggressive enough action to limit greenhouse emissions and promote clean energy. That's her in the pic up top, at a rally on the steps of the state Capitol in Olympia.

And before Twitter idiots ask, no, her parents didn't put her up to any of this, as she explained -- rather patiently, we think -- to KUOW Radio:

"If anything, I'm the one dragging them to things," she said. "They’re supportive, so I don't want to make it sound like they don't do anything, but none of this is my parents. It’s really all my idea. It just feels urgent to me."

And then there's Therese Etoka, a 17-year-old senior at Boise High in Idaho, who testified before the Boise City Council in December to support more energy-efficient codes, and wrote about it in a guest column for the local paper. She and a group of other teens calling themselves the "Climate Justice League" went to the Idaho statehouse last month to lobby both houses of the legislature to restore a climate change component to the state's standards for science education. Yes, the wise leaders of Idaho last year actually stripped out any discussion of climate from the state's official curriculum. Although Boise schools have kept teaching about climate anyway, the teens wanted to ensure students in the rest of the state are getting real science education, too.

Their efforts didn't go over too well in the state House, where a Republican committee chair, Rep. Julie VanOrden, chastised anyone who used the words "climate change" in their testimony. Etoka, who was born in the Democratic Republic of Congo, is president of Boise High's Humanitarian Club, and works with the Idaho chapter of the Sierra Club on climate issues, was dumbfounded: "When she cut me off, I was talking about how climate change and biodiversity had been included in the new standards. So, I was taken aback when I was interrupted." She made a point of returning the next day, to make it clear she wouldn't let science be censored.

While the House Education Committee voted to continue with bowdlerized science standards, the Senate Education Committee, where the teens also testified -- the day of the shootings in Florida, coincidentally -- finally voted to restore climate science to the statewide standards. To get any standards passed at all for the next school year, the House panel was goaded into going along. The kids weren't the only ones standing up for science; virtually all the public testimony had been in favor of restoring the full standards. Etoka told Grist she sees the fossil fuel industry's pushback against serious work on climate change as similar to the NRA's efforts to kill any meaningful regulation of firarms: "This cannot be normal. We’ve had it."

Margolin said she's also inspired by the kids from Parkland and the way they've shifted the debate on guns:

So hooray kids, keep pushing, get out on the streets and -- more importantly -- into the committee hearings and courtrooms, and we'll be sure to march with you this summer. And vote with lots of you in November.

Yr Wonkette is supported by reader donations. Please click here to send us your green dollars.