Now That Everyone Loves Carly Fiorina, Let's Remember Why She Sucks 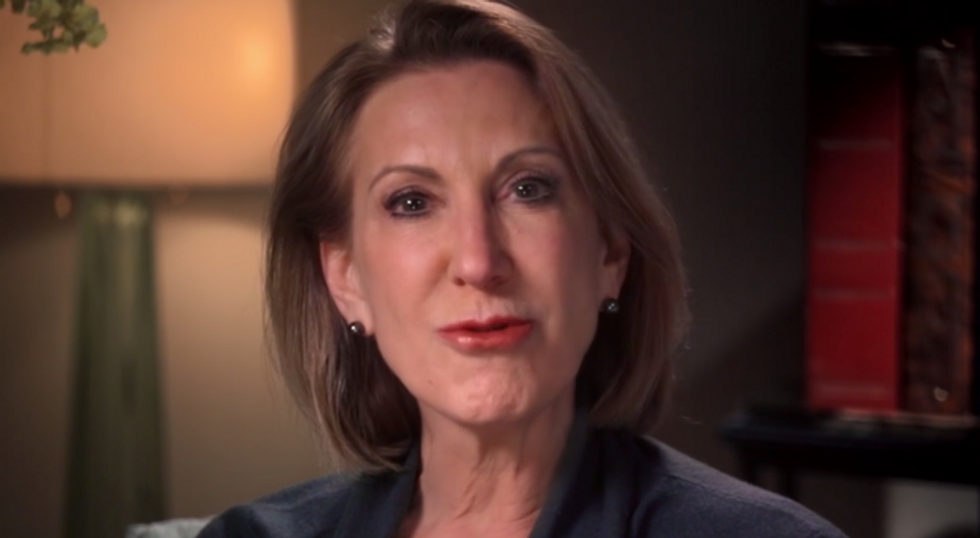 This will not end well

All right. So. There is good news and bad news for Fail Queen Fiorina, the pink-suited Republican lady candidate who beated all the boys in the debate for second-tier losers. Good news: People are like, huh, who was that? She said words gooder than Rick Perry did, I will Google her to find out her story! Bad news: People are Googling her to find out her story. And it does not have a happy ending.

Now that Carly Fiorina is soaring in the polls -- from 2 percent all the way to 5 percent, according to Fox News -- it's time for The Media to start writing about the woman who says she's "extremely proud" of her tenure as CEO of Hewlett-Packard and will "run on that record all day long."

Even the most casual reader of Yr Wonkette knows why that is HI-larious. But now it's time for Very Serious Journalists to educate the masses. Show us how, New York Times:

And so it is curious to those of us who have reported on her business career that there has not been a greater focus in recent days on her “track records and accomplishments,” as she suggested she should be measured by.

Even more striking, Mrs. Fiorina, the only former female chief executive among the candidates, continues to promote her business experience on the trail, yet she was fired by Hewlett-Packard after the company’s stock dropped by half in 2005. She has long blamed her failings at running the technology giant on the bursting of the dot-com bubble and the deepening recession in Silicon Valley after the Sept. 11 attacks.

Classy move to blame her failure at HP on 9/11, but she started tanking the company's stock price long before then:

Her Great Idea, which everyone said was actually a Terrible Idea -- merging with Compaq to lead to a new era of Hewlett-Packard prosperity, with hookers and blow for everyone, huzzah! -- did not turn out as she'd promised:

“Hang with us,” she said on that same day in a conference call with reporters. “It’s going to be a great party.”

The party never happened, but the hangover was brutal. Hewlett-Packard is still recovering from the ill-conceived merger nearly 15 years later, and recently decided to split the company up. There were some 30,000 layoffs. Its stock price plunged and badly lagged its competition.

As one of Fiorina's Republicans rivals would say, Oops.

Fortune also took a recent dumpster dive through Fiorina's record, and hoo boy, does it stink like spoiled milk. Here's a fun fact for ya:

She’s often been erroneously referred to as the first woman to lead a Fortune 500 firm, Hewlett-Packard [...]. That title actually belongs to The Washington Post Company’s Katharine Graham. Then there are the many other trailblazing women leaders preceding Fiorina, including Beechcraft’s Olive Ann Beech, Mattel’s Ruth Handler, Beatrice Food’s Loida Nicolas-Lewis, the Body Shop’s Anita Roddick, Martha Stewart, and Oprah Winfrey.

Not that Carly is ever eager to correct the record because, while she considers feminism mere lefty propaganda to win elections, she sure wants you feminists out there to know what a lady trailblazer she is. You should also know that she opposes mandatory paid maternity leave, wants to defund Planned Parenthood, and doesn't even support equal pay. Basically, she really sucks at feminism, but that's why she's running on her record at HP.

Which, as the Boston Globealso noted recently because everyone's doing it now, was, at the risk of sounding redundant, really super amazingly bad:

The year after Fiorina left HP, employees in the region continued to lose their jobs. Massachusetts used about $800,000 in state funds to help 266 laid-off HP workers in 2006, according to the state Department of Labor.

New Hampshire also received emergency funds from the federal government, because of Fiorina's layoffs there. Not that this is entirely her fault, of course. There was a recession, and also 9/11, and besides, it was really sexism against Fiorina that damn near killed HP, not Fiorina, according to Fiorina. Thankfully, HP was just barely alive enough to let her walk away with $40 million (plus a free computer!) to get the hell out before she could do any more damage. How lucky for her.

Anyway, we sure hope Fiorina enjoys her 15 minutes of glory before she disappears forever into obscurity. Or maybe she should just quit now and start campaigning for her girl crush, Hillary Clinton.