Now That Trumpcare Is Dead, Let's Rest In This Spooky Old Abandoned House 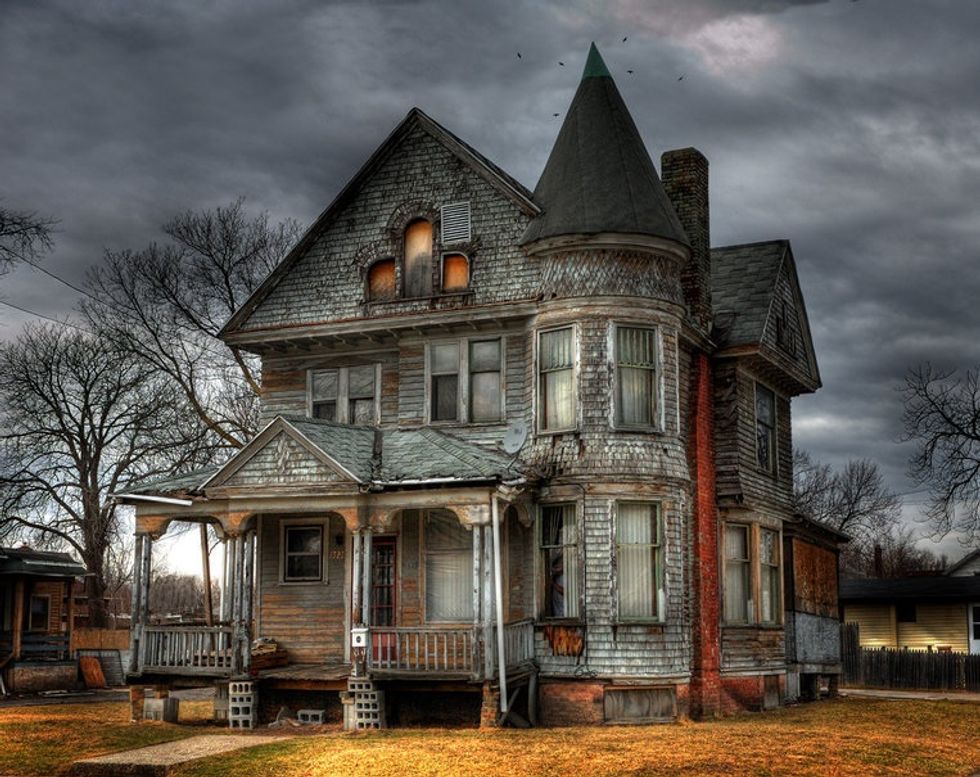 It can't be bad -- they've got satellite TV.

So it looks like the Senate Republicans' attempt to repeal the Affordable Care Act, the "Better Care Reconciliation Act" (BCRA), is really for sure dead this time, following the joint announcement Monday night by two teabagging senators, Jerry Moran of Kansas and Mike Lee of Utah, that they would vote against any motion to proceed with debate on the bill. (They announced together so there's not one single The Republican Who Saved Obamacare to be primaried. It can't be a coincidence that neither is up for reelection until 2022.) The defections of Moran and Lee left the bill with a maximum of 48 votes, effectively driving a stake into its heart (and giving other Rs cover to not say how they'd have voted), so now all we need to do is dig a hole and ... well, shit, where's the body?

[wonkbar]<a href="http://www.wonkette.com/619669/donald-trump-finally-endorses-gop-plan-repeal-and-sit-with-thumb-up-your-ass"></a>[/wonkbar]Ah, Mitch McConnell dragged it off, and for once, Yertle agrees with Donald Trump that they should give Repeal And Don't Do Jack Shit another try. Donald Trump agrees:

Shortly after, McConnell announced in a statement that he would take exactly that step:

Regretfully, it is now apparent that the effort to repeal and immediately replace the failure of Obamacare will not be successful [...] So, in the coming days, the Senate will vote to take up the House bill with the first amendment in order being what a majority of the Senate has already supported in 2015 and that was vetoed by then-President Obama: a repeal of Obamacare with a two-year delay to provide for a stable transition period to a patient-centered health-care system that gives Americans access to quality, affordable care.

What that stuff about taking up the House bill means is that the Senate would replace the text of the House's "American Health Care Act" with a completely different amendment that only repeals the ACA, effective sometime after the 2018 midterm elections, by which time surely the Senate can write a new bill everyone will love. What it actually means is there shouldn't be a chance in hell 50 Republicans will sign on to the plan, because if senators like Susan Collins and Lisa Murkowski were unwilling to vote to cut back Medicaid as sharply as the first Senate bill did, they probably won't vote for trashing the entire ACA in a single stroke. We're hedging, because while it wouldn't make any sense for 50 Republicans -- especially those up for reelection next year -- to vote to eliminate insurance for tens of millions of people (vaguely hoping they'll pass a fix before it goes into effect), we've learned this year that "wouldn't make a lick of sense" is a poor predictor of Republican behavior.

McConnell would still need 50 Republicans to agree to a motion to proceed, and while a full repeal would definitely win over Rand Paul (and has already won over Mike Lee), as well as other righties whose objection to the BCRA was that it left too much of the ACA in place, repeal without replacement would probably lose too many "moderates" to actually move forward. So this way, the misbegotten creature gets to die wearing the most rightwing costume possible while Republicans insist to The Base that it was all Obama's fault.

If Republicans want to really repeal and replace the ACA, they may have to take the route advocated by Jerry Moran in his statement announcing his "no" vote. After a lot of blah-blah-blah about how the BCRA failed to really repeal the ACA, and the dangers of leaving any trace of the ACA alive, lest it morph into a dreaded single-payer plan that would actually cover everyone ("which would require a massive federal spending increase," horrors!), Moran said any further attempts to repeal Obamacare

Yes, that would involve government regulation of healthcare, but wouldn't be socialism, just because. Susan Collins has similarly said Republicans should start from scratch, with hearings and amendments and so on, rather than hastily trying to cram something written secretly through Congress. John McCain, whose recovery from surgery to remove a blood clot in his head delayed a vote on the Senate bill, also called for getting rid of Obamacare, which of course is still the worst, but at least doing it the normal way:

The Congress must now return to regular order, hold hearings, receive input from members of both parties, and heed the recommendations of our nation's governors so that we can produce a bill that finally provides Americans with access to quality and affordable health care.

While it's still possible Mitch McConnell might still pull some weirdass DC Comics "It was actually the evil twin who died" crap with an ACA repeal, and pull out of nowhere a new horror to vote on (which turns out to be the far more evil twin), it's looking more likely that the thing is dead for now, and any attempt to revive it would involve a more conventional legislative process to reanimate its rotting corpse. Worse, they might actually have to work with Democrats to fix parts of the ACA, like stabilizing the funding and insurance options on the individual market. That would be really scary.

[wonkbar]<a href="http://www.wonkette.com/620183/ted-cruz-presents-bride-of-the-son-of-the-obamacare-repeal-from-hell"></a>[/wonkbar]Before all this happened Monday night, we were planning a post on HHS Secretary Tom Price's suggestion that the insurance industry should stop bitching about how the Republicans' healthcare plan is "unworkable" and instead should just be ready to go back to how health coverage worked before Obamacare, in the good old days:

It’s really perplexing, especially from the insurance companies, because all they have to do is dust off how they did business before Obamacare [...] A single risk pool, which is what they’re objecting to, is exactly the kind of process that was ― that has been utilized for decades to care for individuals[.]

Now that it's looking like the brilliant reforms of CruzCare won't be passing, at least not any time soon, that's not as much of a concern. But another thing Price said on Sunday's "This Week" remains a real danger to the ACA, even if it's not repealed:

What we’re doing over at Health and Human Services is going through all the rules and regulations that were promulgated pursuant to the Affordable Care Act [...] Those places where it said the secretary shall or secretary may, 1,442 times, and we’re looking at those and asking the question does this help patients or does it harm patients? Does it increase costs or does it decrease costs? And where the answer is wrong, we’re going to move it in a much better direction.

Translation: Even without repealing the ACA, Team Trump is determined to undermine it in as many ways as they can, also, P.S.: Fuck You, Tom Price, you bastard, the end.

Please click the "Donate" linky below -- the donations are coming from inside the readership!