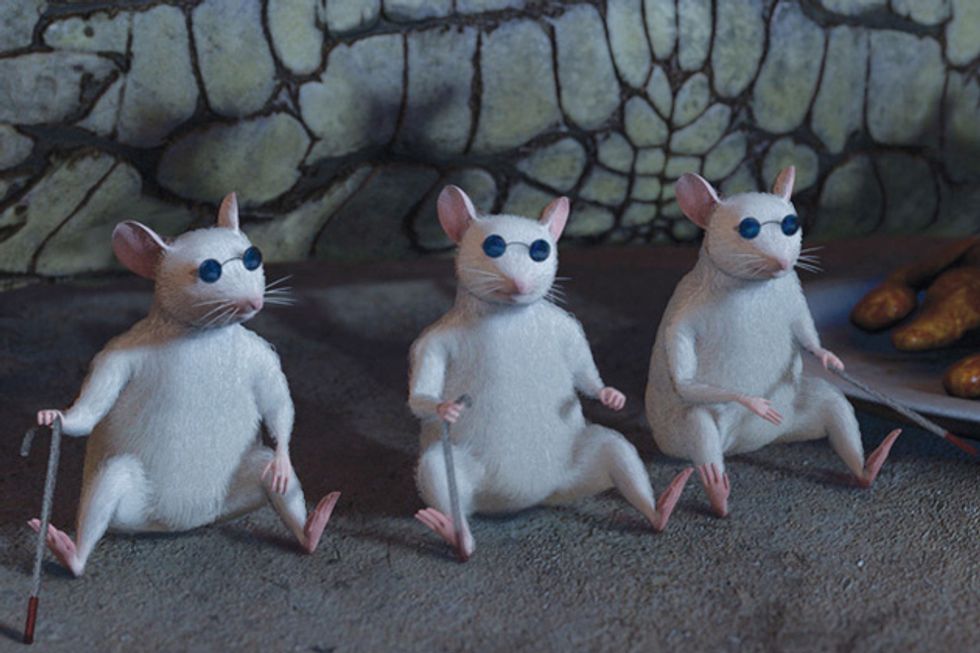 Damn NRA News. Every time it puts out one of these videos, we have to check if our pharmacist replaced our lithium pills with Tylenol the last time we refilled our prescription and we’re now trapped in an animated Escher drawing inside our own head. So it is today, with this charmer of bloated lunkhead Dom Raso, last seen concern-trolling black people about why fighting for gun rights is just like opposition to Jim Crow.

Today Dom would like to gunsplain to us why anyone who thinks blind people shouldn’t be allowed to own guns is a horrible tool. Give us some of that great ammosexual logic the NRA is so famous for, Dom!

Every law-abiding blind individual should be able to have whatever guns they want. And if you disagree with that statement, if you haven’t thought it all the way through, you don’t take your rights seriously enough. Do you think because they’re blind, they’re going to start shooting in every direction and kill everyone... The biggest concern I hear is having blind people carrying in public. Are you envisioning the person waving the gun around or pointing it at anybody for no reason?

From what we’ve seen in this country, being blind is certainly no prerequisite for being dumb enough to wave a gun around in public, point it at people for no reason, or start shooting in every direction and killing everyone. In fact, we can’t recall the last time we heard about a blind guy shooting up an office, or a school, or a restaurant, or a movie theater, or a … you get the point.

It’s been proven that people who lack vision have an increased awareness of their hearing and spatial surroundings.

Your Wonkette will state for the record that we would trust Daredevil to carry a firearm.

Do you think you need to see where you’re shooting if someone’s on top of you trying to kill or rape you while their hands are slowly squeezing your neck and they’re yelling, “I’m going to kill you”?

Ah, there it is, the usual NRA appeal to paranoia and fear so you’ll think you need a gun to fend off the haters and rapers and knockout-gamers. Especially you, blind person who is more vulnerable to crime.

Dom was inspired to make this video by the ongoing debate in Iowa over whether or not to allow the visually impaired to legally carry guns, which some sheriffs and other public safety officials are not happy about. We have no problem with law enforcement officials questioning whether a right granted to one group endangers the public safety of an entire community. Asking such questions is why we have law enforcement officials in the first place! To Ammosexual Dom, however,

When analyzing individual rights, we have to start on the side of freedom. If you jump to a conclusion that strips someone’s civil and constitutional rights away … then you are not participating in what the American belief is and why we have these rights in the first place. Individual rights are too important to not think them all the way through, especially when it comes to defending yourself.

And at what point does our right to be safe in public without worrying about some idiot, blind or not, waving a gun around and shooting us, even by accident, trump that person’s right to carry a gun in the first place? It’s these sorts of questions about the communal good that Bohunk Dom does not seem to be wrestling with. That’s okay, Dom. Us America-hating fascist, rights-stripping commies will wrestle with it for you.