NRA Will Drown Grover Norquist's Islamic Terrorism In A Bathtub 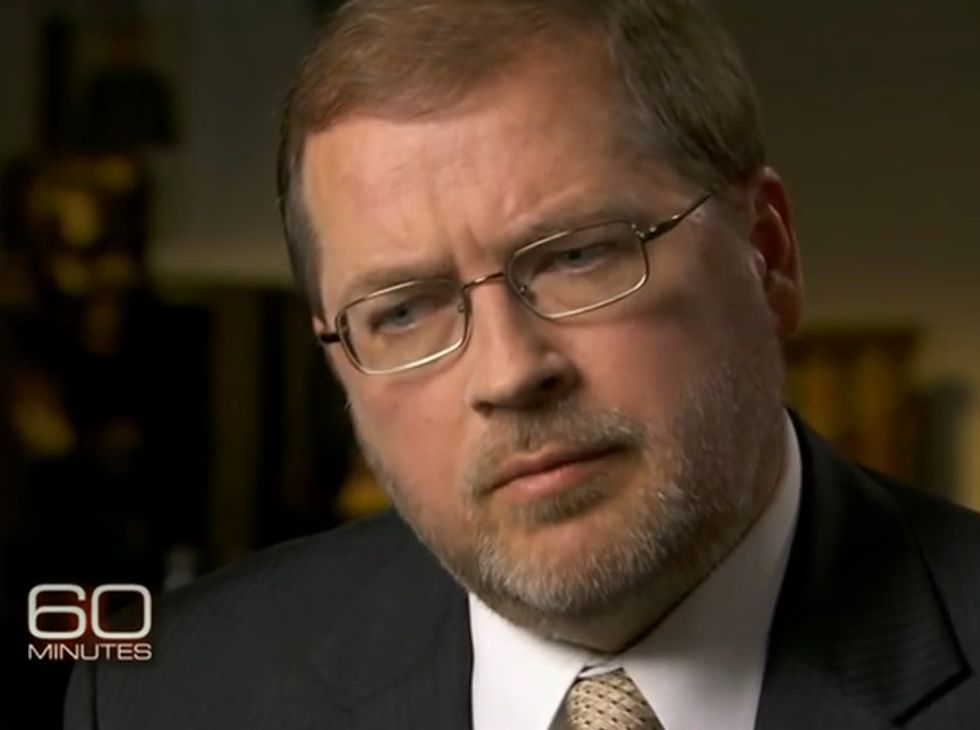 Better take cover, kids, because there's a big ol' Battle of the Rightwing True Believers a-brewin', and there's no telling where the stray rounds will hit. Seems that Grover Norquist is getting a little Politics of Personal Destruction thrown his way as he seeks reelection to the National Rifle Association's Board of Directors. The whole ugly slapfight is covered in excruciating detail by Chaotic Evil Breitbart Horcrux Matthew Boyle, who chronicles the internecine dustup with all the enthusiasm of a junior high school girl telling all about the big cafeteria brawl that got That Bitch Melanie and That Other Bitch Breeanna a week of after-school detention.

Do you want the gory details? Go read the Breitbart thing, if you have the stomach for it. Basically, what it comes down to is that Grover Norquist made the terribly outré mistake of marrying a Muslim lady, which to a number of the very sane people on the right is all the proof that you need that he is In Bed With Muslim Extremists, because obviously all Muslims are extremists. If this sounds vaguely familiar, it's because we were warned months ago by Victoria Jackson, who, citing eminently reliable WND publisher Joseph Farah, informed us that Norquist "has used his well-developed connections in Washington to spread the tentacles of stealthy jihad through the corridors of power, including the White House.” No, calm down and pay attention; this is not about V-Jack tentacle porn.

Jackson was ultimately convinced there's a Muslim Living In The Norquist after reading a book by completely sane conspiracy looneybucket Frank Gaffney, who Norquist now accuses of trying to undermine his reelection to the NRA Board. Norquist wrote a long letter to members of the NRA board explaining that Gaffney had been "stalking" him and spreading evil lies about his having connections to Muslim Brotherhood leaders. Norquist noted that Gaffney's claims have been debunked by conservative journalists, but that Gaffney has continued to suggest that Norquist is somehow connected to radical Islam. He closed by complaining that “one of Gaffney’s folks has sent out my wife and daughters pictures on twitter.”

BUT WAIT THERE'S MORE! Boyle documents, in far more detail than anyone could conceivably want to know, the Shocking Revelations that have been shockingly revealed by former Breitbartian Sad Lee Stranahan, who now works for "the new media product 'Brought To Light,'” which we guess is a podcast or a video game or something. Stranahan has documented that people who know people connected to Norquist are actual Palestinian activists who hate Israel! Imagine that! In fact, one of these terrible Palestinian Israel haters is actually Norquist's brother-in-law, having married Norquist's sister in 1998! Even more shockingly, that guy and Norquist's sister have a daughter who attends Smith College and is also a "Palestinian Activist!"

We sort of lost interest after a while, but it looks like they're having a hell of a lot of fun slapping each other over this stuff and fighting about who loves Israel the moistest, which is apparently a key concern in deciding who gets to serve on the board of the gun lobby. Fortunately, the NRA is still cool with having Ted Nugent on its board.

And to think, they're all armed.