NRO: Ladies Should Love Mitt Romney Because Of Gold-Digging, And Having Daughters Made Obama Gay 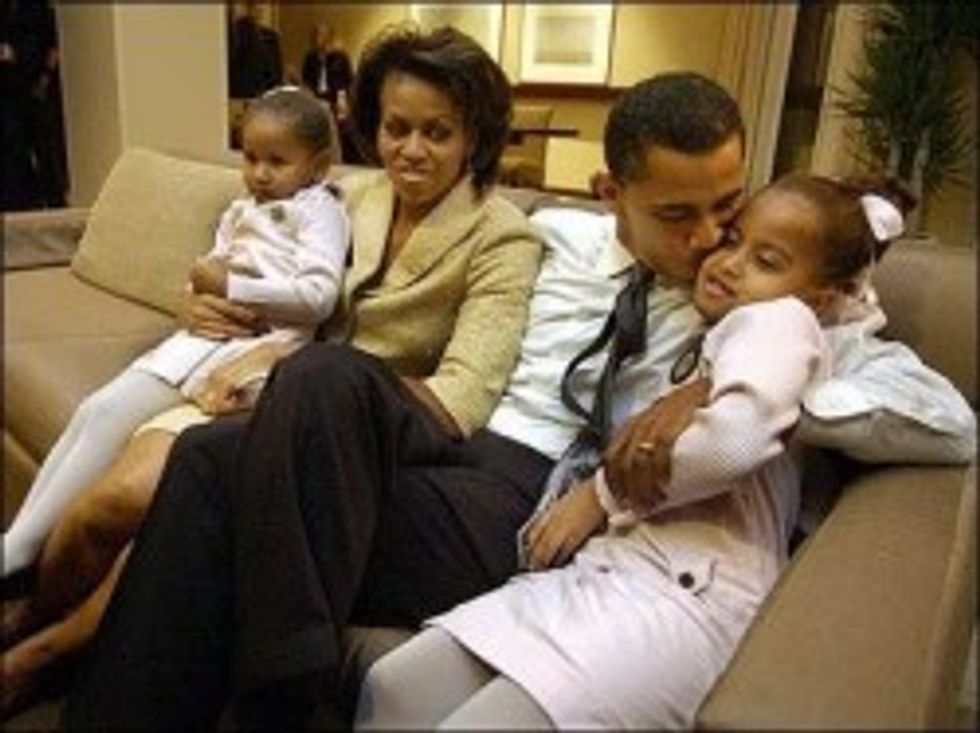 "From an evolutionary point of view,"harrumphs Kevin Williamson of the National Review Online, "Mitt Romney should get 100 percent of the female vote. All of it. He should get Michelle Obama’s vote. You can insert your own Mormon polygamy joke here, but the ladies do tend to flock to successful executives and entrepreneurs." But why is this? Because Mitt Romney is super-rich, you guys (we don't know if you have heard), and women select for status, and evolutionary biology proves that high-status animals produce more males and Mitt Romney has five sons -- Tagg, Dack, Tupper, Tyrone and T'Nesho -- while Barack Obama has two daughters, because his semen has sparkles in it and smells like Elizabeth Arden. Oh, sorry, here is your actual quote:

Professor Obama? Two daughters. May as well give the guy a cardigan. And fallopian tubes.

Haha, Obama has daughters! What a fag!

Let us block-quote, brothers and sisters, just to ensure we are not taking Herr Williamson out of his proper context!

You want off-the-charts status? Check out the curriculum vitae of one Willard M. Romney: $200 million in the bank (and a hell of a lot more if he didn’t give so much away), apex alpha executive, CEO, chairman of the board, governor, bishop, boss of everything he’s ever touched. Son of the same, father of more. It is a curious scientific fact (explained in evolutionary biology by the Trivers-Willard hypothesis — Willard, notice) that high-status animals tend to have more male offspring than female offspring, which holds true across many species, from red deer to mink to Homo sap. The offspring of rich families are statistically biased in favor of sons — the children of the general population are 51 percent male and 49 percent female, but the children of the Forbes billionaire list are 60 percent male. Have a gander at that Romney family picture: five sons, zero daughters. Romney has 18 grandchildren, and they exceed a 2:1 ratio of grandsons to granddaughters (13:5). When they go to church at their summer-vacation home, the Romney clan makes up a third of the congregation. He is basically a tribal chieftain.

Professor Obama? Two daughters. May as well give the guy a cardigan. And fallopian tubes.

Oh, yes, Mitt Romney's princely 10 percent to charity. Yawn. Let us read some more, because it is 'tarded.

Saleh al-Rajhi, billionaire banker, left behind 61 children when he cashed out last year. We don’t do harems here, of course, but Romney is exactly the kind of guy who in another time and place would have the option of maintaining one. He’s a boss. Given that we are no longer roaming the veldt for the most part, money is a reasonable stand-in for social status. Romney’s net worth is more than that of the last eight U.S. presidents combined. He set up a trust for his grandkids and kicked in about seven times Barack Obama’s net worth, which at $11.8 million is not inconsiderable but probably less than Romney’s tax bill in a good year. If he hadn’t given away so much money to his church, charities, and grandkids, Mitt Romney would have more money than Jay-Z.

So ladies -- and Queen Michelle -- why aren't you voting for the rich guy who has more status because he is rich and has sons? WHY are you insisting on voting with your brains, for your interests, instead of just bending over for the sheikh (HE HAS MONEY)?