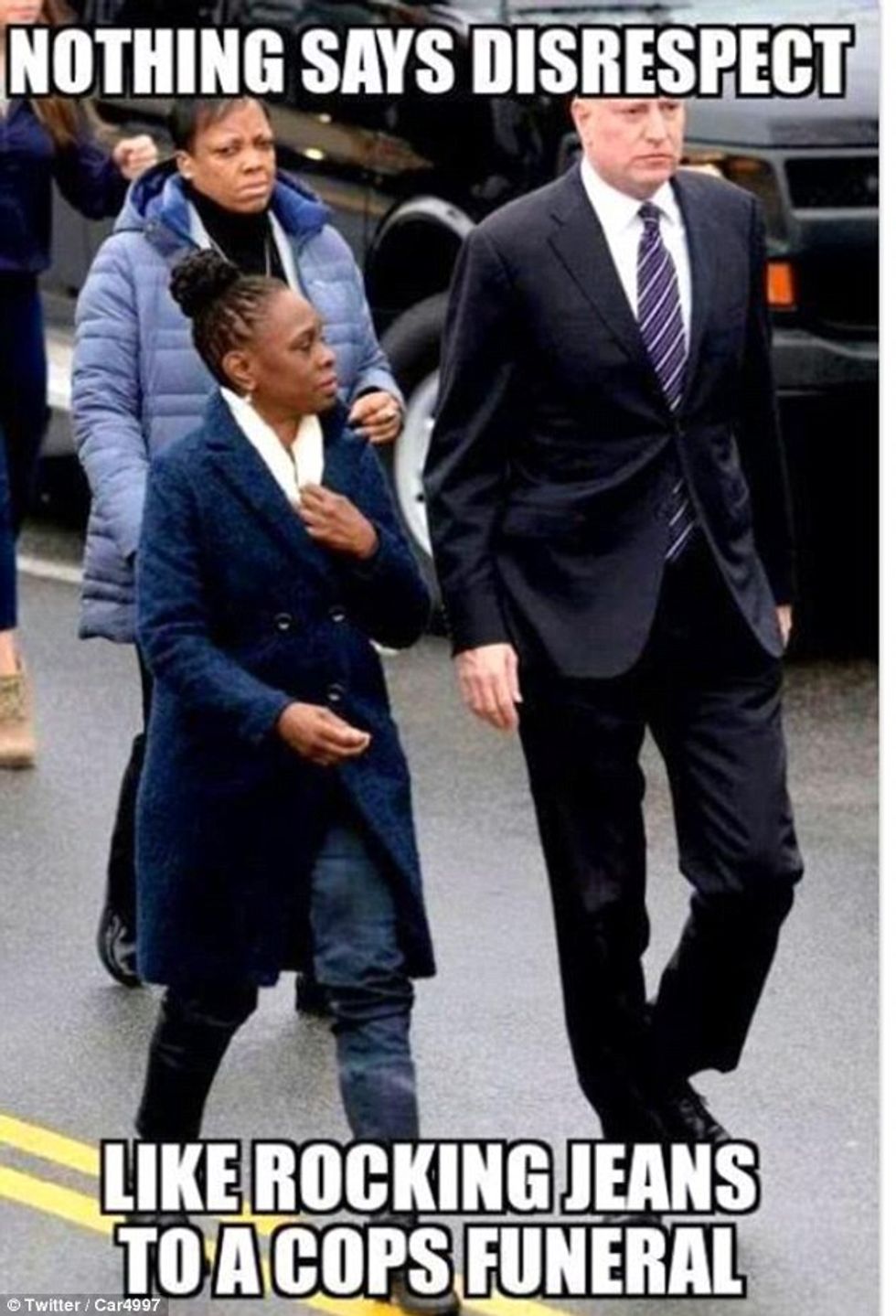 Mayor Bill de Blasio, he's got a problem with the Rank and File because he won't let them stop all the black men and pat down their genitals for being OBVIOUS CRIMERS. (Yes, we know we have a dangling genital in there. That is because it is thepenises doing the crimes.) But did you know his wife, a former lesbian (never forget) went to that NYPD funeral for Officer Liu in a Fuck the NYPD t-shirt, pretty much? (No she didn't.) Okay, well if she didn't go to the funeral in a fetching vintage 1988 Straight Outta Compton concert tour number, she WORE JEANS. (She still didn't.)

Perhaps you saw some of this exhausting mess on your own FacePlaceSpace over the weekend, and because your friends are left-thinking, they were coming at this from the other angle: SHE DID NOT WEAR JEANS IT WAS JUST A PANTSUIT THAT LOOKED LIKE JEANS YOU ARE ONLY SAYING THAT BECAUSE SHE IS BLACK.

Do you ALL have to be wrong? Yes, apparently you do.

First your liberal faceplant friends linked to this little number from the Daily News (ugh, gross):

Even [Chirlane] McCray's favorite fashion designer, who sells the $600 pantsuit, has chimed in - telling the New York Daily News that she was actually wearing a dark rayon-polyester blend suit and that it wasn't denim.

If the pantsuit wasn't denim, you must something that rhymes with denim!

OK, let's look at that picture again. Does it matter if it wasn't denim if it presents as denim?

The skinny leg, rumpled, over a too-high boot; the striated line thingies coming down to give the impression of denim; the blueness of it. THOSE LOOK LIKE JEANS EVEN THOUGH THEY ARE REALLY THIS.

Super cute blue coat though! It does not look like denim at all!

So we are all in agreement because I am about to tell you your opinion: Chirlane McCray, New York City's first lady, laid a fashion egg at an NYPD cop's funeral. Did she mean to shove a middle finger in his corpse's face? PROBABLY NOT! But it was too casual for the occasion, even though it was a suit.

This is what Dick Cheney wore to a Holocaust thing o.O

And this is an incorrect opinion, as gleaned from the opinionatin' masses (your friends of friends on Facebook, who are well-meaning but still incorrect):

"I'm not a big fans of trousers, but, as I'm a lawyer, I see a lot of women wear them to court. My analysis: if you can wear them to court (where a wardrobe mis-calculation could, theoretically at least, land one in jail for contempt), it's formal enough for anywhere. Except maybe prom.

That said, I have never heard any white, female public figure having her wardrobe subjected to such scrutiny.”

That is a thing a woman said! With her typing fingers! Lol.

Robin Givhan, can we get a ruling? What is the most elegant and refined part of Sexy Grandma Sarah Palin’s campaigning ward-robe? The pedal pushers? Those clodhoppers? We see nothing wrong with the Superman tee — it’s playful and very cute, fitting as it does those way bigger jugs she’s got pinned on! We are going to go with the wrap-around sunglasses, to be worn behind the wheel of her monster truck. Nothing says class — or is it “military dictator”? — like wraparound shades.

So no, it is not racist to say Chirlane McCray bombed (METAPHORICALLY) the Officer Liu funeral. It also was not the final last-straw of disrespect the de Blasio family can't help showing to the fallen of the NYPD. That was ... the NYPD.

[DailyMail ugh / all over your facebooks]