NYC Protesting and Palling Around With Anti-Terror Militarized Police 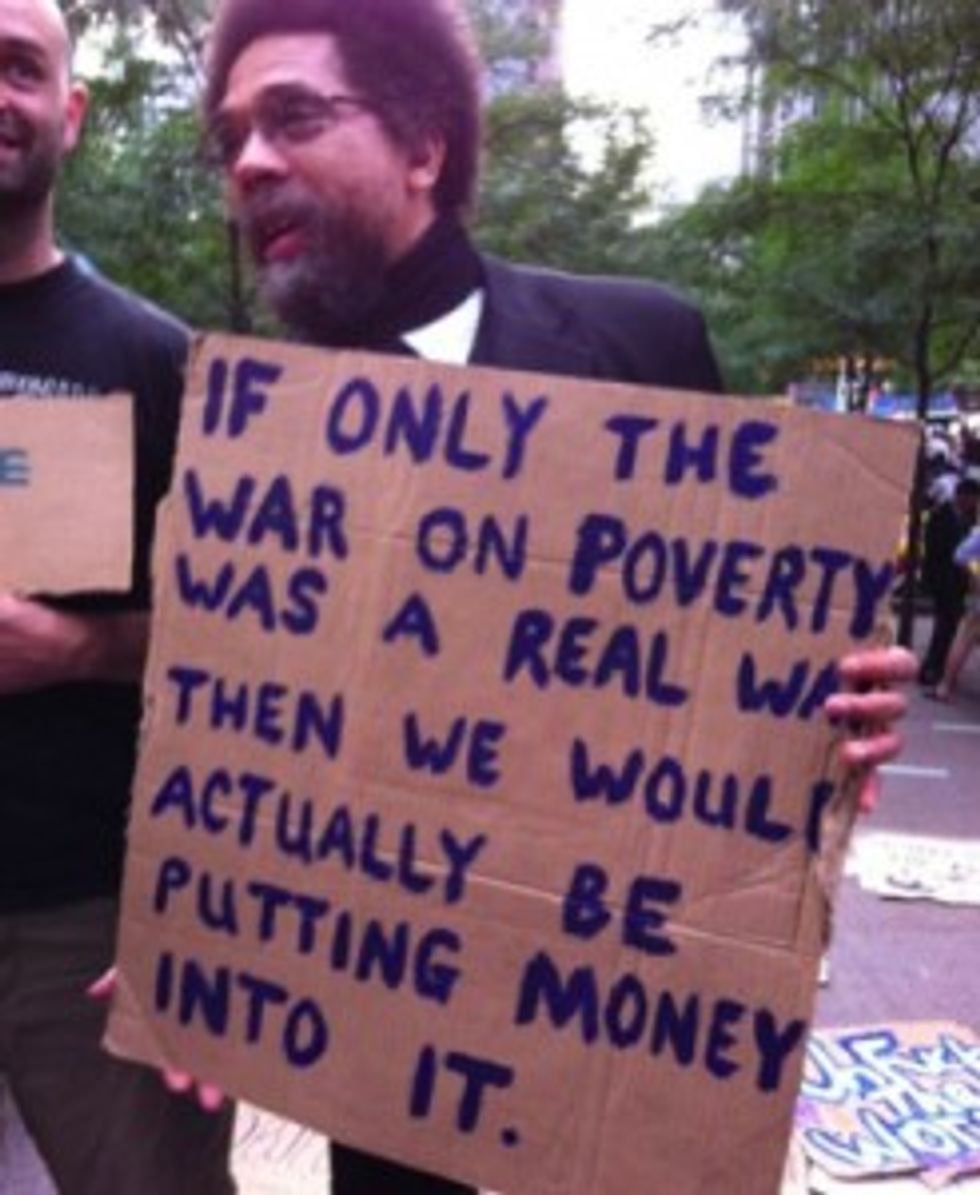 Good morning! Your dutifulOccupy Wall Street correspondent is still embedded with the Sandinistas of Zuccotti Park, who still want to destroy America with their nonviolent opposition to living in a terrible banana republic. We even accompanied the park dwellers on their daily morning march around Wall Street, which was filmed in its entirety by shadowy NYPD types armed with camcorders, probably so that they can tag us all on Facebook/add our names to the No Fly List/Assassination Queue. Famous non-white scholar Cornel West made a surprise visit, and we also accosted high school teachers and preachers, all of whom admitted on camera that they need to get a job.

The backbone of the Occupation is the general assembly, which meets twice a day. General assemblies are "an open, participatory and horizontally organized process through which we are building the capacity to constitute ourselves in public as autonomous collective forces within and against the constant crises of our times" -- also known as "an open forum where people talk about stuff." It's not a disorganized scream-fest, though. Agenda items are drawn up before each meeting, volunteers serve as facilitators, lists are made of people who wish to speak, and working groups with specific responsibilities and goals present the assembly with announcements and updates. But it can be an excruciating process: the police have prohibited the use of megaphones, which means every sentence is broken into five-word chunks and then repeated/yelled by the audience so that everyone can hear. Ignore the crabby sad-sacks at the New York Times -- group rituals such as the general assembly illustrate that the demonstrators have created a high-functioning community committed to giving everyone an equal voice. (They sometimes refer to themselves as "an experiment in direct democracy.")

In the above flipcam footage, a young lady reads a letter that the Occupiers received from a soldier stationed in Iraq. Throughout the day, workshops and discussion groups meet, and graduate students and professors host lectures and teach-ins:

A Weird, Physical Relationship With the NYPD

And then there's the policia.

The New York Times wrote (and probably typed, on a monopolized computer!) that the NYPD's recent pepper-sprayin' and curb-stompin' jubilee was "the flip side of a force trained to fight terrorism." This horrifying statement is probably true! Members of the NYPD Counter Terrorism unit have been spotted lurking around the perimeter of Zuccotti Park. And let's not forget about the "Moroccan Initiative" -- a freaky CIA-NYPD circle jerk which involved putting "[brown] American citizens under surveillance" and "scrutinizing where [the brown people] ate, prayed and worked, not because of charges of wrongdoing but because [they were brown]." Yes, in this Post-9/11 World, the NYPD must always be on guard, which is why it has the necessary "weaponry" to "take down" an "airplane." Fly safely! (Ha ha, even when you think you're safe, high up in the sky, the NYPD will still find a way to mace you and/or blow you up.)

Since the original "9-11 Day" (which is sponsored by JPMorgan Chase and Best Buy, and no, we're not joking), police departments around the country have become increasingly militarized, and the NYPD is leading the way, with its anti-aircraft pepper spray howitzers and CIA make-out sessions. (Eventually police departments will be replaced with Erik Prince Rape Squads, but this process takes time.) And this is all very scary and soul-crushing and sad.

Yes, the last week has illustrated that the NYPD is a quasi-military unit capable of heinous violence -- but the actual relationship between the police and the demonstrators has been largely ignored by the media. Brookfield Office Properties, which owns Zuccotti Park, wants to remove the Hippie/Normal People Scourge as soon as humanely possible. But according to the Wall Street Journal, the New York Police Department "has urged the firm to let [protesters] stay" and "both Brookfield and the NYPD say they're working together to resolve the situation." Media coverage of police brutality, while certainly welcomed and warranted, misrepresents what has been -- and hopefully will continue to be -- a cooperative, peaceful coexistence between the people with the AA guns and the jobless losers. A policewoman strolling through the park on Monday engaged in friendly banter with demonstrators ("I'm not allowed to have a personal opinion [about Occupy Wall Street], but as long as everyone is safe, I'm happy"). And during a Tuesday morning march around Wall Street, protesters stopped banging their homemade drums and thanked the NYPD for their cooperation.

We'll probably all still end up in FEMA death camps guarded by NYPD paramilitaries, but you never know!