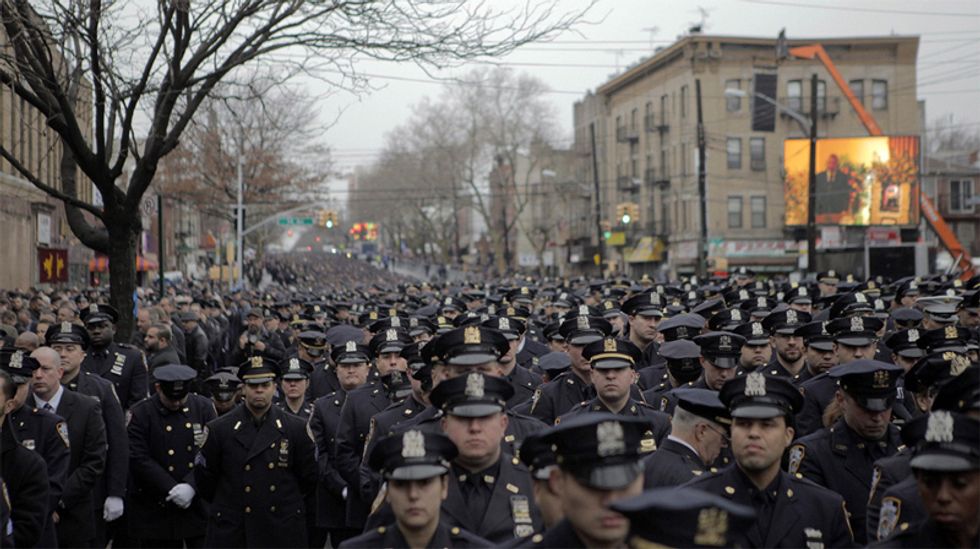 Hundreds of NYPD police officers came together Sunday for the noble purpose of very publicly giving the finger to Mayor Bill de Blasio again, and we suppose they were also there for the funeral of murdered officer Wenjian Liu, too. [contextly_sidebar id="eJQXTjO5YhzDYwamtMAtNli0WbpAPGOk"]As they had done last week at the funeral of Liu's partner Rafael Ramos, large numbers of police standing outside the funeral hall turned their backs to video monitors as de Blasio began his eulogy. Police have decided that they hates the nasty de Blasio, hates him, because he personally ordered the deaths of Ramos and Liu by telling his son, who is black, to be very, very careful around police.

Estimates of how widespread the protests were seemed to vary on which part of the crowd of cops reporters were observing; a reporter for Animal New York said that the "majority" of cops had their backs turned, while in a liveblog of the funeral, one New York Times reporter said that "handfuls" of NYPD cops turned their backs and that "more than 100 out-of-town law enforcement personnel" did the same. The main NYT story on the funeral simply said "hundreds" took part in the gesture, while still other observers said that the police were like "a wall," "a rope," or "a fan." Photos in the Times showed a mix of officers, some with backs turned, but most facing the monitors. We especially liked this shot of a few jolly coppers at parade rest, smirking as hey solemnly turned their backs on de Blasio, because it's about honoring the dead, you know:

In his eulogy, de Blasio said of Officer Liu -- who was promoted posthumously to detective -- “Detective Liu lifted us up in his brief time ... New York stands a little taller today because of the time he walked among us.” Following the NYPD's antics at Liu's funeral, the city returned to its more characteristic slouch.

When de Blasio finished his remarks and New York Police Commissioner William Bratton began speaking, the cops all turned around again, even though Bratton had also insulted them by asking in an internal memo that they not turn Liu's funeral into another protest. Edward Mullins, president of the police sergeants' union, expressed indignation at Bratton's memo, saying that it "was really taken as an insult, that you almost don’t have the right to express yourself ... It makes the mayor look weaker than he is.” We were not previously aware that NYPD sergeants' uniforms came equipped with pearls, but Mullins apparently clutched them for dear life.

Adding to the surrealism of the event, Animal New York reports that as photographer Aymann Ismail took pictures of the officers with their backs to the video screen, one NYPD officer complained, “You’re being very disrespectful walking around like that.” Mr. Ismail was reportedly treated at the scene for minor irony-induced whiplash, but is expected to make a full recovery.