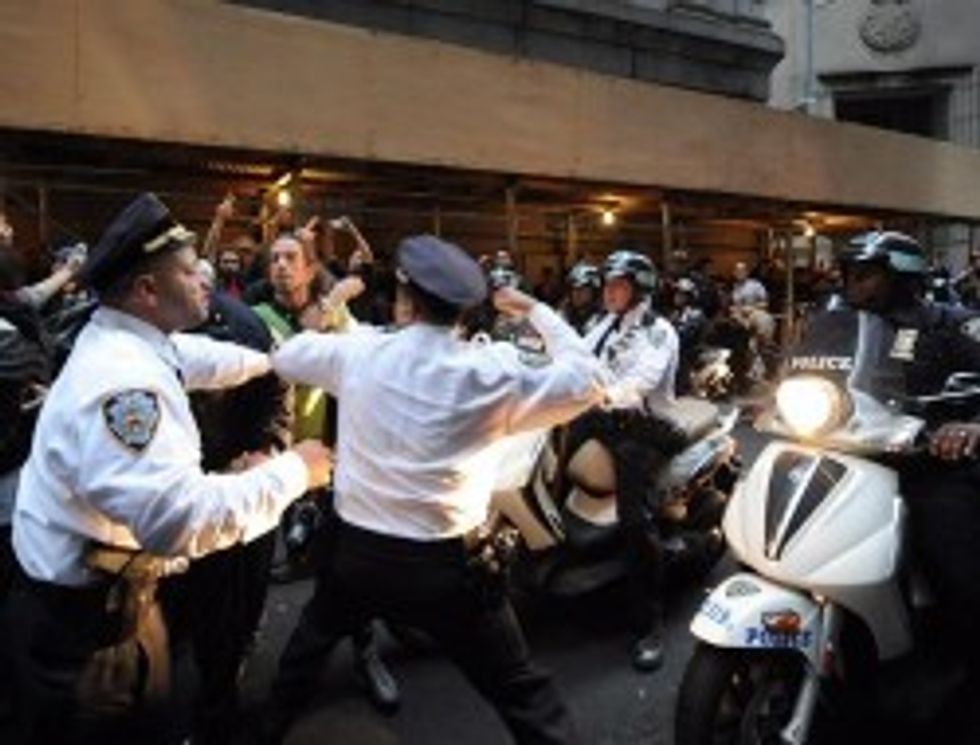 So! What has New York’s Finest been up to lately? Turns out—quite a lot! We learned a few days ago that the NYPD will be rolling out an all-seeing“Domain Awareness System” sometime this week, which sounds like it would sure keep them busy. But the NYPD is apparently masterful at multitasking, because they have still managed to find time to  arrest and possibly beat up a New York Times photographer while he was on assignment in the Bronx.

A freelance photographer for The New York Times was arrested on Saturday night while on assignment with two reporters who were conducting street interviews in the Bronx.

The photographer, Robert Stolarik […] was taking photographs of the arrest of a teenage girl about 10:30 p.m., when a police officer instructed him to stop doing so. Mr. Stolarik said he identified himself as a journalist for The Times and continued taking pictures. A second officer appeared, grabbed his camera and “slammed” it into his face, he said.

Mr. Stolarik said he asked for the officers’ badge numbers, and the officers then took his cameras and dragged him to the ground; he said that he was kicked in the back and that he received scrapes and bruises to his arms, legs and face.

Don’t worry though, we’re sure that there’s a perfectly reasonable explanation for all of this, and that none of it is the NYPD’s fault. Perhaps he accidentally smashed his camera into his OWN face, handed it to the police officers, and then fell on the ground?

The Police Department said in a statement that officers had been trying to disperse the crowd and had given “numerous lawful orders” for both the crowd and Mr. Stolarik to move back, but that he tried to push forward, “inadvertently” striking an officer in the face with his camera.

See? The first part went down sort of like we thought, except he accidentally smashed the camera into someone else's face instead of his own.

The police said that Mr. Stolarik then “violently resisted being handcuffed” and that, in the process, a second officer was cut on the hand. A video of the episode taken by one of the reporters who was with Mr. Stolarik shows Mr. Stolarik face down on the sidewalk, beneath a huddle of about six officers. [...]

George Freeman, a lawyer for The Times, said the episode was “especially distressing” because the newspaper had been working with the Police Department since the Occupy Wall Street protests last fall, in which some journalists were denied access to certain areas or were arrested, to find ways to prevent the police from interfering with journalists in the course of their work.

What is so "distressing," exactly? It sounds totally reasonable that a 43-year-old career photographer ran his own face into his camera, or possibly ran someone else's face into his camera (this part is fuzzy) and then “violently resisted being handcuffed” to the point that he required six officers to take him down. Not sure what the problem is there. Also, why would you even NEED a photographer from the New York Times when the NYPD has cameras everywhere anyway?