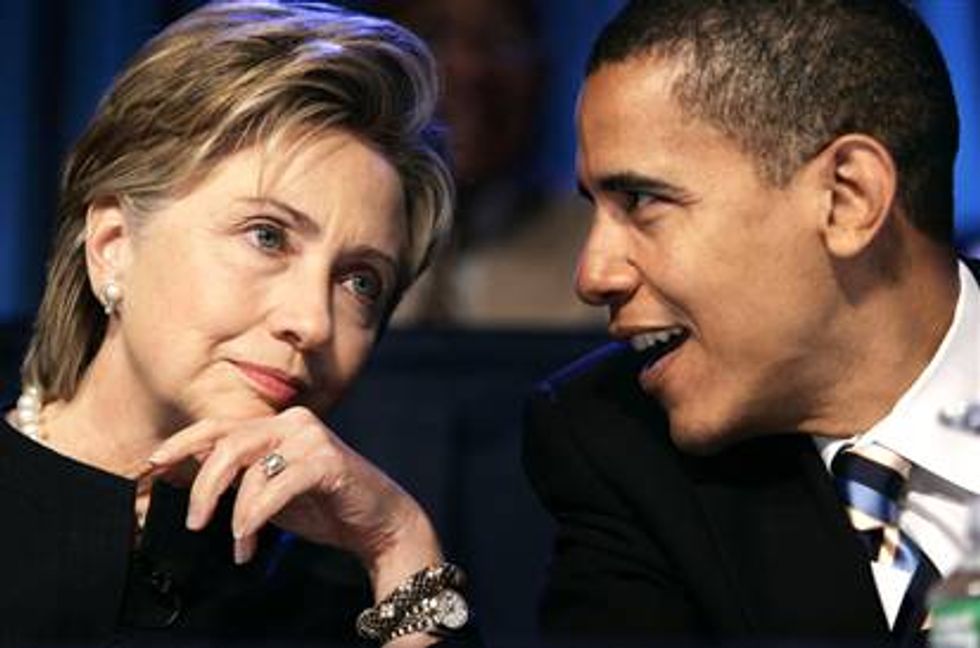 SEXY FOR EACH OTHER

Remember we said at you last week that B. Barry Bamz and Joe Biden were literally shaking with giggle-citement over getting to play attack dog against Donald Trump between now and November? You know they are just dying. Well now, Sources Familiar With Obama's Sexytime Schemes are saying the president will probably formally endorse Hillary this week, as the 2016 Democratic Primary-Palooza winds down after Tuesday's contests:

With Hillary Clinton set on Tuesday to secure enough delegates and become the presumptive Democratic nominee, the White House is signaling that Obama's full endorsement could come as early as this week.

White House officials and Democratic aides are still determining how and when Obama, along with Vice President Joe Biden, will throw their formal endorsements behind Clinton and her campaign. Eager to exploit his recent spike in popularity, Obama is looking to become the most active lame duck campaigner in recent presidential history. [...]

While he has formally remained neutral in the race between Clinton and the Vermont independent senator, Obama has inched closer and closer to Clinton's side in recent weeks and will take the final step after the last round of states vote on Tuesday.

[wonkbar]<a href="wonkette.com/602468/barack-obama-about-ready-to-jizzsplode-all-over-campaign-trail"></a>[/wonkbar]Ooh, how is he going to do it? Is he going to hang-glide onstage at Hillary's campaign soiree thingie Tuesday night and say, "I, Barry Bamz, take you Hillary, to be the next Barack O'Sexy Of America?"

CNN shares some of the president's itinerary for the week, giving Wonkette an opportunity to irreponsibly speculate about other ways this shiz might go down:

Now, we know the California Primary hasn't happened yet, and we at Wonkette firmly believe all y'all should have a right to go vote for anyone you want to get the nomination. But at the same time, it seems clear who the winner will be. CNN reports that Obama even said last week that, "I think we'll probably have a pretty good sense next week of who the nominee will end up being," and by "next week" he meant this current week.

So! Get ready for Bamz and Old Handsome Joe to start riding around U.S. America on horses LOLing at that dumbfuck Donald Trump, and doing their part to make sure our next president is Lady Hillary Of Clinton.

[wonkbar]<a href="http://wonkette.com/602633/is-obama-activating-million-beyonce-army-to-make-him-dictator-for-life-probably"></a>[/wonkbar]Unless Obama is only going to pretend to endorse Hillary, and this is part of his devious plan to make himself dictator-for-life. Nah, probably not. (BUT MAYBE.) Shhhh, it'll be fine. (BUT WHAT IF IT'S NOT?) And even if Obama does declare himself dictator-for-life, that wouldn't be so bad, would it? (NAH THAT WOULD BE OK.)