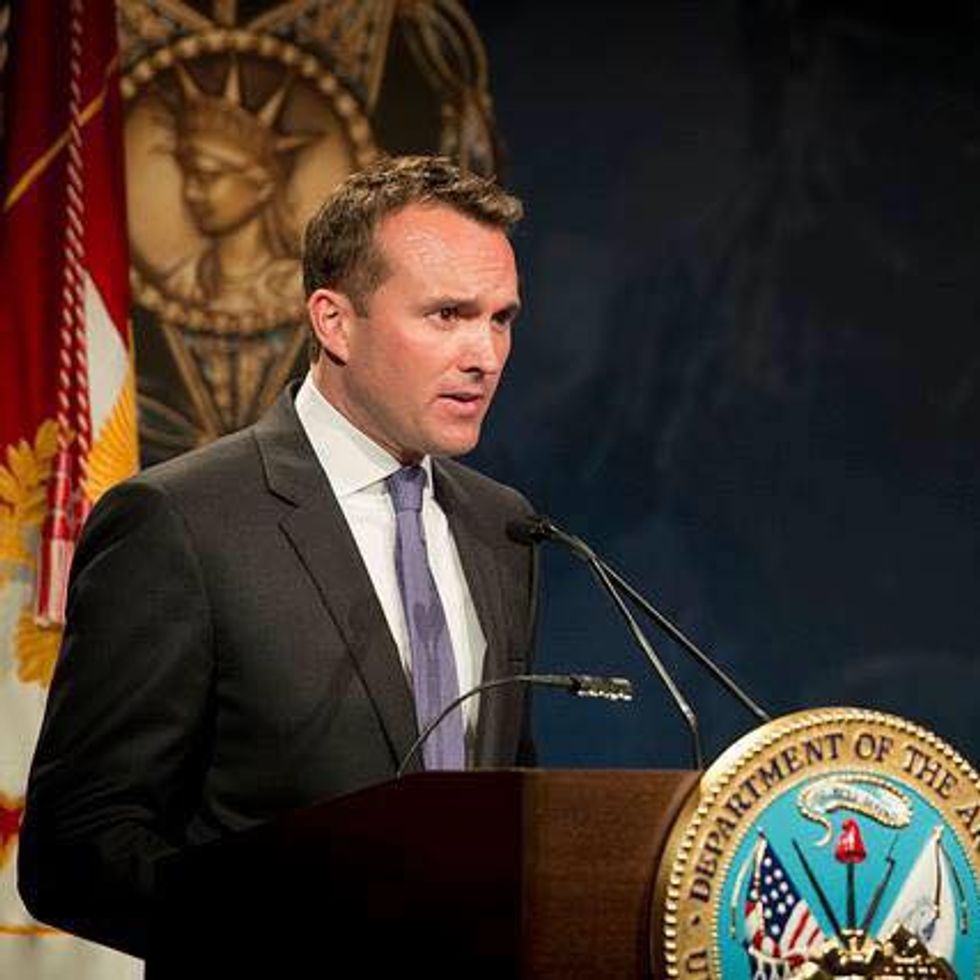 We'd play army with him.

Just last week, we were telling you about how, last year, Obama nominated a known homosexican, Eric Fanning, to be secretary of the Army, but that Republican Sen. Pat Roberts, a dickhead, was being a dickhead about letting him be confirmed. Was it because he was gay? No, Roberts said, it was because he wanted that terrible Kenyan Muslim president to assure him that none of the awful Gitmo detainees (many of whom are charged with nothing) would be relocated to Leavenworth in Kansas, if and when Obama FINALLY closes that terrible prison.

[wonkbar]<a href="http://wonkette.com/601690/obamas-gay-army-secretary-nominee-on-hold-because-sen-pat-roberts-is-being-a-dick"></a>[/wonkbar]Well, there is good news! Sen. Roberts got over his shit, lifted his hold, and now the United States Army is LORDED OVER BY THE GAYS. Or this one gay, who happens to be so freaking qualified the Senate confirmed him unanimously:

On Tuesday, Roberts said he has gotten the “assurances I need” about Guantanamo and was ready to release his hold on Fanning.

The Kansas senator said he personally called Fanning earlier in the day to tell him he was planning to let him through.

“My issue has never been with Mr. Fanning’s character, his courage or his capability,” Roberts said on the Senate floor. “He will be a tremendous leader.”

That's right, all you anti-gay Republicans. All your wingnut senators who happened to show up for work on Tuesday were like "I WOULD LIKE THAT GAY TO BE SECRETARY OF THE ARMY!" Can you believe they betrayed you like that? Just a few years ago, they were all freaked out about repealing Don't Ask Don't Tell, and now they have gone all the way down the slippery slope into a pile of gays. Or, one gay, specifically. They all went down for Eric Fanning, is what we are trying to say.

[wonkbar]<a href="http://wonkette.com/594114/mike-huckabees-shriveled-manhood-threatened-by-gay-homosexual-army-secretary"></a>[/wonkbar]And ooh, Lord, Mike Huckabee must be so mad he's upchucking his homemade powdered sugar roadkill casserole! When Fanning was first nominated, Huck was squawking and grunting about how the Obama had named a GAY! CIVILIAN! to be the ARMY! SECRETARY! Huck is, of course, a moron, as the Army secretary is a civilian position. In his mind, though, Barry Bamz had caught an Uber over to DuPont Circle, thrown a drag queen over his shoulder and given her control of our national security apparatus.

Our point is we hope Mike Huckabee is having a REAL BAD DAY, and that we offer our sincerest Wonkette congratulations to Eric Fanning, for being the first ever big gay secretary of the Army, and also being SEXXXY.