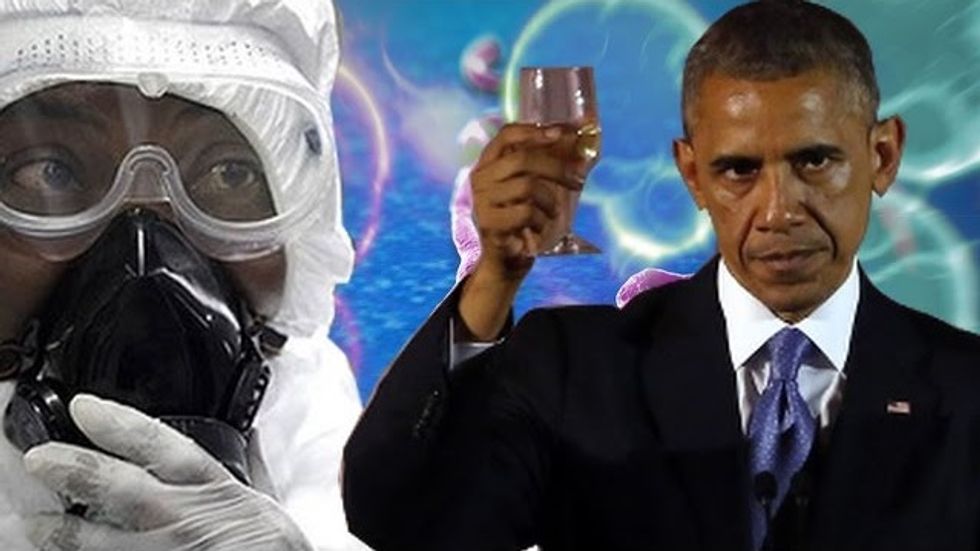 The U.S. government will be sending 3,000 troops to West Africa to help build treatment centers and coordinate services in the fight against the Ebola outbreak. President Obama announced the initiative during a visit to the Centers for Disease Control in Atlanta Tuesday. The deployment will be done in coordination with the World Health Organization and will be centered in Liberia, where the virus has hit the hardest. The U.S. effort will build 17 treatment centers in that country and will eventually be training 500 healthcare workers a week in patient care and in sanitary procedures to prevent the spread of the virus. America will also be distributing sanitation kits to affected families and, sad part, distributing over 5000 body bags to municipal health authorities. Still, good on us!

So far, only a few Big Names in the wingnuttosphere have come out against the plan. Rush Limbaugh, a major vector for stupid rightwing talking points, released several derpomemes Tuesday that may prove highly contagious, before crowing that in spite of Obama's attempts to wreck the country, America is still Number One -- as exemplified by Obama's Ebola initiative, which is stupid:

Now, apparently we're also told, don't worry, there's no risk of any of these 3,000 soldiers contracting Ebola, and there is no risk of any of them bringing the virus back to the US with them. Otherwise, Obama surely wouldn't be sending them over there, if there were any risk at all. So now, in addition to the world's policeman, we are the world's doctor. After we've apologized, how many times by President Obama in the last six years, where does the world still turn for solutions to crisis-proportion problems?

So it's pointless and dangerous to send troops to fight Ebola, but that also proves that America is the go-to country for making the world a better place. Which we shouldn't do because we have problems here, dammit.

You think Ebola is scary now, just wait until Doctor Obama gets through with it.

Declaring the deadly viral epidemic a national security threat, the president who invented Obamacare is dispatching our military to West Africa. Into the jungled Hot Zone he plans to send some three thousand U.S. troops trained to fight soldiers of war and enemy combatants.

No hedging, hemming or hawing. That’s 3,000 sets of boots on the ground.

Nearly twice as many as the president will admit he is committing to combat the Islamic State group in Iraq.

The piece briefly allows that "taking Ebola seriously is to be commended" before plunging into the REALLY scary stuff. Maybe Ebola could mutate really quickly "into a far more deadly virus that is more easily transmitted, perhaps through the air." And once that happens, we're all in big trouble, unless maybe we seal our borders completely, "perhaps even with military troops. Maybe, say, 3,000 of them. But they will be in West Africa. Somehow fighting Ebola."

Dead Breitbart's Home For The Thuddingly Ignorant presented a calm, balanced story titled "As Obama Sends Troops to Fight Ebola, Expert Says 'Five Million Could Die.'" It presented the basic facts of the U.S. deployment, alongside the opinion of a German doctor who is pretty sure there's no containing the disease, which will surely kill 5 million people before it "burn[s] itself out." The comments are where the real action is, though, and the Breitbart Brain Trust is pretty much united in the opinion that this deployment is another illegal order by the Kenyan Usurper, who just cares more about looking good in Africa than about fighting terrorism, and he probably also wants to expose American Troops to Ebola so that they can bring it back here and infect us all.

That's also the conclusion reached by lesser Tea Party blog Freedom Outpost, which frets that the Liberia mission will be "the catalyst that brings Ebola Zaire to U.S soil" and notes that the State Department just ordered 160,000 hazmat suits. Well, if Obama isn't expecting to bring Ebola to our shores, what's the State Department doing buying all those hazmat suits? Yr Wonkette knows The Real Answer: They're going to fill up the hazmat suits with all the ammunition that Homeland Security bought, then bury it in the desert for as-yet-undisclosed reasons. Don't tell.

Also too, because we are sad masochists, we also checked the vitals of the booboisie over at wingnut aggregation nexus Free Republic, where they are sure that Obama is an idiot who doesn't realize that he's putting Our Troops in mortal danger, and/or he's deliberately trying to bring Ebola to the U.S., so that he can declare martial law. One highly strategic thinker believes that the deployment to Liberia is a test "to see if any troops will refuse the order" so that the military can be honed down to only those who will slavishly follow Obama's illegal orders, and fire on their fellow Americans after Martial Law is declared. Another creative variation was that Obama wants the entire military to be killed off by Ebola so that his massive "civilian army" can finally take control after they emerge from the secret vaults where they've been hiding since Glenn Beck put them there in 2009.

And then there were the medical experts weighing in, like the genius who wondered,

So if a hemorrhaging Ebola patient is running toward our soldiers flinging blood everywhere what are the rules of engagement for defending themselves against this biological weapon?

We expect to hear Louie Gohmert saying some variation on that within the week.

Finally, we were struck by how concisely this Freeper summed up the general Obama angst:

I’m mad as hell right now, and I don’t even have sons in the military. Good thing that I don’t because if I did, I would be on my way this morning to DC. Our border is wide open, heads are getting lopped off, the MB [Muslim Brotherhood] is in the White House, “ISIS is not Islam”, and he sends troops to Africa to fight germs. The man is insane and needs to be stopped.

Beyond all the paranoid pants-wetting, the thing that really strikes us about all these panicked wingnuts is that, for people who claim to have a huge hard-on for The Troops, they're astonishingly ignorant about what the military actually does. While some of those going to Liberia will be armed and guarding personnel and equipment, chances are this isn't going to be an infantry-heavy operation. If there's one thing the military is good at, it's moving people and stuff around, and in assisting with a healthcare crisis, there's a hell of a lot of logistical support needed. For that matter, Chemical, Biological, Radiological, and Nuclear (CBRN) defense is a pretty big specialty in the military, and as a commenter on Nicholas Kristoff's Facebook page noted,

tasks like this are right up their alley. Most of the time they sit in a warehouse counting off inventory on things like gas masks, and an opportunity to actually go out and do what they trained for is great [...]

And finally, US troops are NOT going to bring Ebola back to the US. Troops being deployed to a CBRN environment will receive training and equipment to be prepared for it. Expect anyone interacting with the sick to be wearing MOPP suits at all times.

Golly. One might almost get the impression that the president and the CDC and the Pentagon have given this more thought than a bunch of terrified angry wingnuts with broadband connections. We're rather relieved that the policy is being set by the grownups. On the other hand, it's never too early to panic.