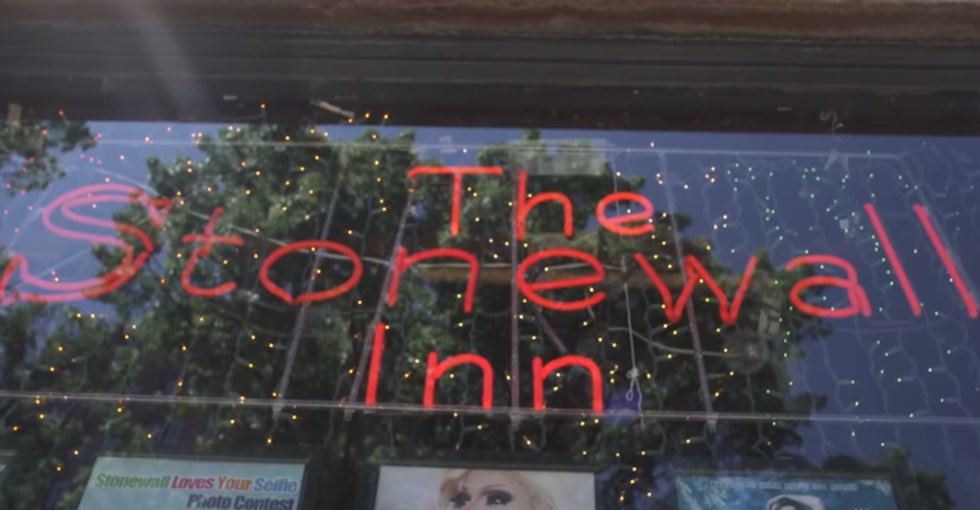 What is our president Barack O'Sexytime up to on this lovely Friday, as the world reels from the UK's vote to leave the European Union? Oh, just gay stuff, because that's what he always does. Obama signed a proclamation designating the historic Stonewall Inn in New York as the first ever national monument dedicated to the struggle for LGBT equality. The proclamation said, "Hey Stonewall, you are so gay, and you are a national monument now." Afterward he signed it by shooting a laser beam of rainbow glitter out of his hand, the same way he signs everything.

After protecting more than 265 million acres of land since becoming president — most of it wilderness — Obama signed a proclamation Friday morning to protect a tiny piece of the country’s biggest city: 7.7 acres in Manhattan.

The president designated the site of the Stonewall Riots, where LGBT people pushed back against a police raid on the Stonewall Inn on June 28, 1969, as the first national monument to LGBT rights. [...]

“Stonewall will be our first national monument to tell the story of the struggle for LGBT rights,” he continued. “I believe our national parks should reflect the full story of our country — the richness and diversity and uniquely American spirit that has always defined us. That we are stronger together. That out of many, we are one.”

Want to see the video the White House released to commemorate this occasion? Here you go!

So we were wondering, of course, if there were any conservatives out there having a shitfit in their jorts over this, the latest evidence that the president of America is intent on cramming the gay agenda down every American throat until his last second in office. But then we realized we don't actually care what wingnuts have to say right now, because fuck them.

It's particularly moving and poignant, coming two weeks after the horrific shootings in the Pulse gay nightclub in Orlando, that the president is now declaring Stonewall, the gay bar where it all began, as a national monument. What a testament to what happens when a bunch of LGBT people get pissed off and decide they've had enough.

After he was done making Stonewall a monument, President Obama also announced that Mount Rushmore will become homosexual next week, the Statue Of Liberty will go lezzie, and the Washington Monument will finally come out of the closet, because it looks like a dick. Just fooling, we are saying so many #jokes about this very heartwarming news item, can we even be serious for one minute? (No.)