Some environmental nice-time for America, courtesy of Barack Obama, with a big assist from Sen. Harry Reid: Wednesday, President Obama declared two new national monuments, protecting 1.35 million acres in Utah and 300,000 acres in Nevada. Needless to say, the drill-, log-, and strip-mine-everything crowd, including legislators from both states, are already vowing to undo the new monuments, whining that Obama is killing jobs, but presidential power to declare national monuments and parks is pretty broadly defined by the Antiquities Act, signed into law by that radical environmentalist and America hater Teddy Roosevelt. How about some lyrical description of the two newest national monuments, courtesy of National Geographic?

The Bears Ears National Monument in Utah — named for twin buttes that poke above the horizon — will protect a diverse southwestern landscape that the novelist Wallace Stegner wrote could “fill up the eye and overflow the soul.” It includes soaring red-rock formations, piñon-juniper mesas, 12,000-foot-high mountain peaks, and secluded sandstone canyons that harbor well-preserved prehistoric dwellings and rock art panels—more than 100,000 Native American cultural and archaeological sites in all. It’s among the most significant archaeological areas in the United States.

The Gold Butte National Monument, northeast of Las Vegas, will protect ancient petroglyphs, winding canyons, mining ghost towns, sweeping vistas, and a host of desert wildlife, including endangered desert tortoises and bighorn sheep. Some of the land, which is currently managed by the federal Bureau of Land Management (BLM), is also grazed by cattle belonging to rancher Cliven Bundy. His refusal to remove the cattle led to an armed standoff in 2014 with BLM officials. That dispute has still not been resolved.

Bundy Buddies Added Dicks To Indian Petroglyphs. Not A Dick Joke Wonkette Can Get Behind

Native American tribes have been calling for protection of both sites for decades, while local politicians have all too often said there's no need for the mean old Feds to step in, since the states are doing a great job of protecting the areas already. As we reported back in April, here's the sort of thing that's resulted from leaving the archaeological sites of the Gold Butte area to the tender mercies of (some, not all) area ranchers, four-wheel-drive enthusiasts, and anti-government "Patriots": 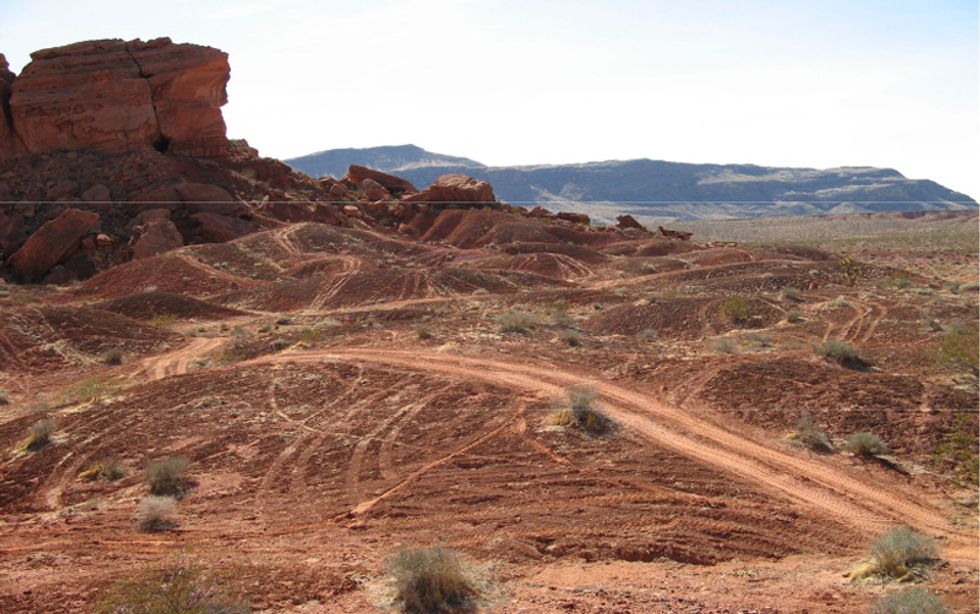 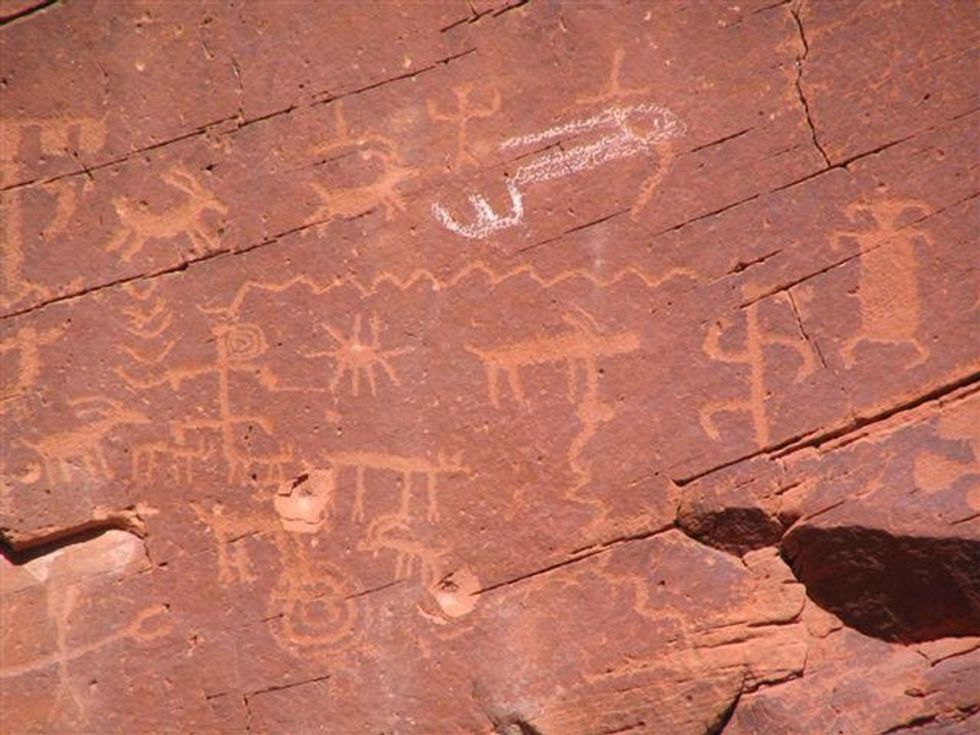 Can't see why anyone thinks that stuff needs to be protected; both monuments have suffered from looting of archaeological sites, destruction of wildlife habitat, and off-trail vehicle use. Monument designation will allow far better protection of those resources, even if you can't make fuel out of them. And despite the whining about Obama killing off jobs and recreation in the new national monuments, existing oil and gas rights and grazing leases will be kept in place, but no new projects can be authorized. And no, Cliven Bundy, you can't let your damned starving cows wander into Gold Butte any more, since you stopped paying for grazing rights in the 1990s. 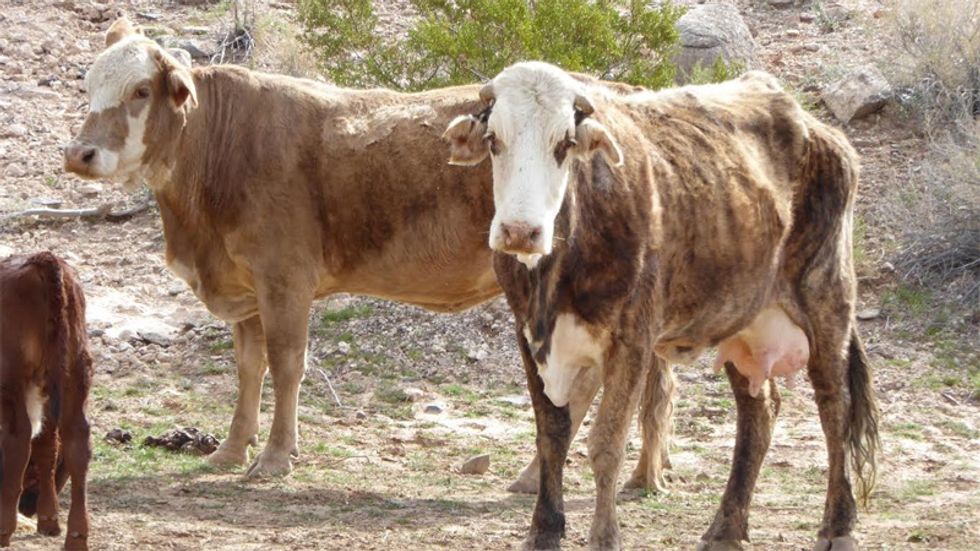 When Interior Secretary Sally Jewell held a public hearing in July on the proposed Bears Ears monument in Utah, some of the local whites didn't appreciate a bunch of "outsiders" -- like members of the five tribes proposing the monument -- ruining everyone's fun and trying to take America away from local control:

[When] Navajo Nation President Russell Begaye, wearing a suit in spite of the heat, tells Jewell that his people relate to the Bears Ears the way an Anglo does to a family member, monument opponents respond with boos, and chant, “Go home!”

The proposed monument does not include any tribal lands, yet if anyone is home here, it’s Begaye, whose ancestors sought refuge near the Bears Ears during the 1860s, when U.S. troops killed, brutalized and enslaved Navajos before exiling them from their homeland. The Zuni, Hopi and other Pueblo leaders here to lend support to the monument are also home. Their ancestors built the Bluff Great House, just a stone’s throw from the hearing venue, back in the 11th century, and their religions and cultures were shaped by this ground.

Yeah, but the Native Americans had the land stolen from them fair and square back in the 19th century, so why should they have any say in how it's managed now?

Utah Republican Sen. Mike Lee promised a fight to undo the national monuments so the land can be used the way God intended it, with the mining and the drilling and the logging and the four-wheelin'. In a statement issued Wednesday, he pledged,

This arrogant act by a lame duck president will not stand [...] I will work tirelessly with Congress and the incoming Trump administration to honor the will of the people of Utah and undo this designation.

That may be easier said than done. Christy Goldfuss, of the White House Council on Environmental Quality, told reporters Wednesday that Trump would not be able to undo the designation by himself; at the very least, it would require an act of Congress:

“The Antiquities Act gives the president the authority to create monuments, but does not provide explicit authority to undo them, and since the Antiquities Act was passed in 1906, both Republican and Democratic presidents have established monuments to protect our rich heritage for historic and scientific wonders,” Goldfuss said. “No president has actually undone a monument created by a prior president, and courts at all levels have broadly upheld the president’s authority to designate national monuments under the act.”

And no matter how much Trump and his incoming Screw-the-Earth cabinet may want to help Lee push through a reversal of the two new monuments, it seems unlikely Senate Democrats will let it happen. There's something to be said for the filibuster. In a statement, Harry Reid called Gold Butte "quintessential Nevada," and praised President Obama's courage in designating the monuments, calling Obama "one of greatest environmental presidents in American history."

Senator-elect Catherine Cortez Masto, who'll be taking Reid's seat in January, seems determined not to back away from a fight to preserve the new national monuments, either: 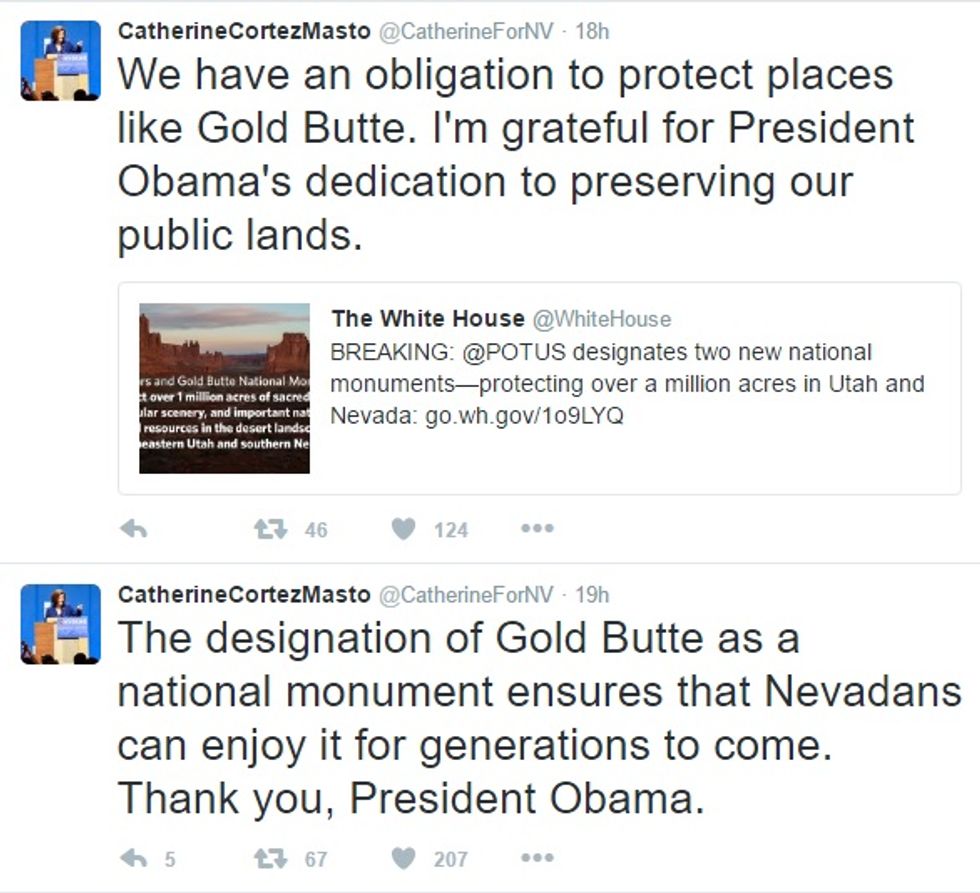 For the first time in conservation history, the primary advocates for this new national monument were Native American tribes. In October 2015, the Navajo, Ute Mountain, Hopi, Zuni, and Ute nations presented the Obama administration with a proposal to preserve and co-manage public lands they consider sacred. The full membership of the National Congress of American Indians supported them. Remarkably, given the history of Indian people and the United States, the government listened.

Arizona Congressjerk Will Save Grand Canyon From Barack Obama And Tyranny

In all sincerity, thanks a lot, Obama. Now, if you could see your way to protect the lands surrounding the Grand Canyon from uranium mining and other exploitation, we'd call it a pretty good year for the West, which is more than just ranchers and oilmen, no matter how much they whine about tyranny. God knows the new crew isn't going to designate any new monuments, ever.

Republican Governors Explain, Poorly, Why They Are Being Coronavirus Idiots

Prancercise In The Time Of Coronavirus

Fuckin' A It's Not That Hard!