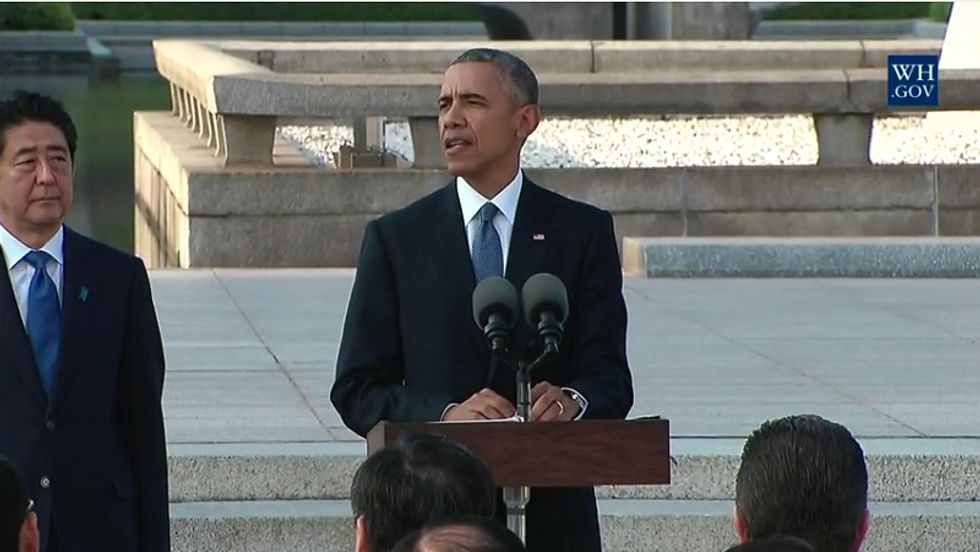 We know, you never watch the videos on Wonkette, because they are usually of terrible people saying terrible things. But take a little time to watch this White House video of President Obama's speech at Hiroshima's Peace Memorial Park. This is a guy who knows how to do solemnity. And no, rightwing idiots, reflecting on what war is, what nuclear weapons do, and why we should never use them again is not an apology -- though god knows there's plenty to apologize for. It's about responsible use of power, which is the kind of thing we'd like our leaders to give some thought to now and again.

This is not an apology. This is simple decency:

Why do we come to this place, to Hiroshima? We come to ponder a terrible force unleashed in a not-so-distant past. We come to mourn the dead, including over 100,000 Japanese men, women and children, thousands of Koreans, a dozen Americans held prisoner.

Their souls speak to us. They ask us to look inward, to take stock of who we are and what we might become.

To anyone thinking Obama was out to flatter the sensibilities of a former enemy, that reminder of "thousands of Koreans" was a deliberate but subtle jab at rightwing Japanese nationalists who deny Imperial Japan's virtual enslavement of Koreans before and during the war.

Obama moved on to a reflection on the history of human warfare and technology:

Yet in the image of a mushroom cloud that rose into these skies, we are most starkly reminded of humanity’s core contradiction. How the very spark that marks us as a species, our thoughts, our imagination, our language, our toolmaking, our ability to set ourselves apart from nature and bend it to our will — those very things also give us the capacity for unmatched destruction [...]

Science allows us to communicate across the seas and fly above the clouds, to cure disease and understand the cosmos, but those same discoveries can be turned into ever more efficient killing machines.

The wars of the modern age teach us this truth. Hiroshima teaches this truth. Technological progress without an equivalent progress in human institutions can doom us. The scientific revolution that led to the splitting of an atom requires a moral revolution as well.

We couldn't help but think of Kurt Vonnegut's very similar but far less diplomatic thoughts on the same topic:

I thought scientists were going to find out exactly how everything worked, and then make it work better. I fully expected that by the time I was twenty-one, some scientist, maybe my brother, would have taken a color photograph of God Almighty -- and sold it to Popular Mechanics magazine. Scientific truth was going to make us so happy and comfortable! What actually happened when I was twenty-one was that we dropped scientific truth on Hiroshima.

Obama's speech wasn't an apology. It was a question. We have these horrifying weapons. They're a fact of our existence. So what do we do with them? Obviously, some warmongering bomb-lovers will condemn Obama for his weakness in actually stating the effect of the place -- and if you've been to Hiroshima's Peace Park, you know it is a genuinely quiet, holy place where you have to think about August 6, 1945:

That is why we come to this place. We stand here in the middle of this city and force ourselves to imagine the moment the bomb fell. We force ourselves to feel the dread of children confused by what they see. We listen to a silent cry. We remember all the innocents killed across the arc of that terrible war and the wars that came before and the wars that would follow.

Mere words cannot give voice to such suffering. But we have a shared responsibility to look directly into the eye of history and ask what we must do differently to curb such suffering again.

Obama -- liberal fool that he is -- insisted that we aren't chained to militarism, that The Bomb isn't our destiny. If the U.S and Japan could become allies, if Europe could become a single (if fractious) economic community, then maybe we can make some progress toward not destroying ourselves with our best killing machines:

And perhaps, above all, we must reimagine our connection to one another as members of one human race.

For this, too, is what makes our species unique. We’re not bound by genetic code to repeat the mistakes of the past. We can learn. We can choose. We can tell our children a different story, one that describes a common humanity, one that makes war less likely and cruelty less easily accepted.

We see these stories in the hibakusha. The woman who forgave a pilot who flew the plane that dropped the atomic bomb because she recognized that what she really hated was war itself. The man who sought out families of Americans killed here because he believed their loss was equal to his own.

President Obama went on to say that the principles in the Declaration of Independence right down to the "endowed by our creator," which your wingnuts like to accuse him of leaving out -- are "an ideal to be strived for, an ideal that extends across continents and across oceans." And darned if he didn't manage to connect the unalienable rights of life, liberty, and the pursuit of happiness to the moral lesson of Hiroshima:

The irreducible worth of every person, the insistence that every life is precious, the radical and necessary notion that we are part of a single human family — that is the story that we all must tell.

Those who died, they are like us. Ordinary people understand this, I think. They do not want more war. They would rather that the wonders of science be focused on improving life and not eliminating it. When the choices made by nations, when the choices made by leaders, reflect this simple wisdom, then the lesson of Hiroshima is done.

The world was forever changed here, but today the children of this city will go through their day in peace. What a precious thing that is. It is worth protecting, and then extending to every child. That is a future we can choose, a future in which Hiroshima and Nagasaki are known not as the dawn of atomic warfare but as the start of our own moral awakening.

It's also worth noting that, for the first time in American history, the nuclear "football" -- the briefcase with all of the nuclear attack plans and launch codes -- has traveled with a sitting U.S. president to the place where atomic weapons were first used. In that satchel are the codes capable of launching 22,000 Hiroshimas. Let's take a moment to think about why we want someone sane having access to that briefcase. We want a president who isn't having wet dreams about saving some money by encouraging Japan and Korea to develop their own nuclear stockpiles.

We originally planned to write this piece with a brief mention of Barack Obama's Hiroshima speech, and then some extended mockery of the righwingers who are busy freaking out about Obama going on yet another "apology tour," like John "Bomb Everything" Bolton, who called the visit "shameful" because "Presidents should adhere to our values and the Constitution, and not treat America’s enemies as morally equivalent to us." And then we watched Obama's Hiroshima speech and decided to focus on that instead, because it matters, damn it. And John Bolton can go fuck himself.