Barry Bamz is pretty OK with the Supreme Court's decision on marriage equality today, saying in a Rose Garden speech that it was "a victory for America." We can get behind that.

Progress on this journey often comes in small increments. Sometimes two steps forward, one step back, propelled by the persistent effort of dedicated citizens. And then sometimes there are days like this when that slow, steady effort leads to justice that arrives like a thunderbolt.

Yep, that about sums up how it felt. Obama's first reaction to the Court's decision came on Twitter, almost immediately after the announcement: 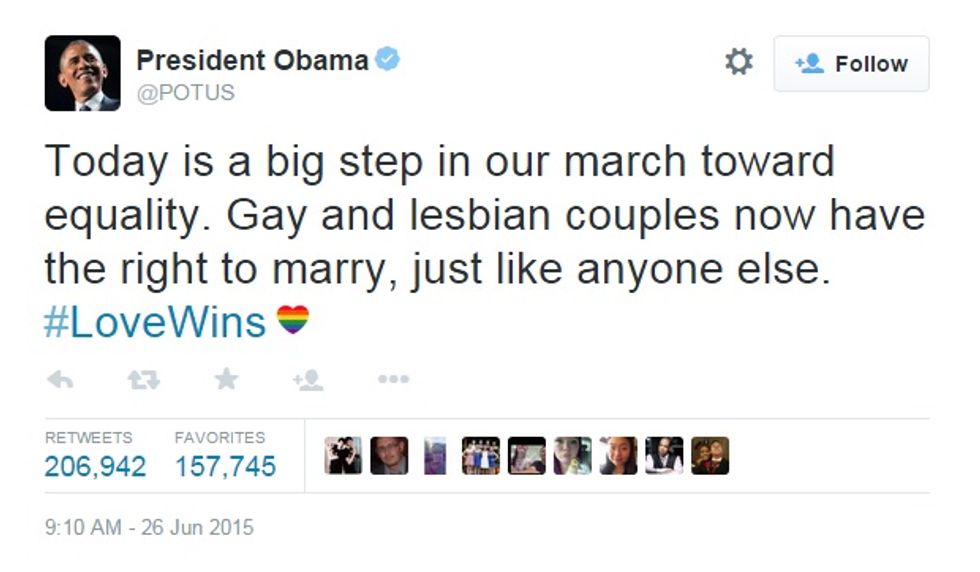 There was a brief "ouch" moment as the president fumbled the name of plaintiff Jim Obergefell, who sued to have his name listed on his late husband's death certificate, but that's OK -- Obama had already called Obergefell to congratulate him, saying, "Your leadership on this, you know, has changed the country ... I couldn't be prouder of you and your husband." In his speech, Obama praised the activists, couples, families, and supporters who have helped to make "an entire country realize that love is love."

Barry framed the ruling as a victory to make our big dumb often-infuriating nation (OK, that's us, not him) an inclusive place, and said that civil rights is an ongoing process of spreading equality. It's always time to pay the victory forward:

Those who have come so far on their journey to equality have a responsibility to reach back and help others join them. Because of all our differences, we are one people, stronger together than we could ever be alone -- that's always been our story. We are big and vast and diverse, a nation of people with different backgrounds and beliefs, different experiences and stories but bound by our shared ideal that no matter who you are or what you look like, how you started off, or how -- and who -- you love, America is a place where you can write your own destiny ... Today we can say, in no uncertain terms, we've made our union a little more perfect.

We weren't quite sure whether Barry was pausing for effect, or maybe choking up a little, when he paused in the middle of "or how -- and who -- you love." We know that for us, it was the point where we got a bit teary. OK, more teary.

Also, too, get ready for the wingnuts to explode over the closing of the speech: Instead of the routine "May God bless you and may God bless the United States of America," Obama closed simply with:

You see that? Obama knew that God would burn his tongue right out of his mouth for invoking His Name in celebration of sodomy. And even worse, it's now official: the President is FINISHED with God!!!! No, the fact that he immediately boarded Marine One to head to Charleston where he'll deliver the eulogy for Rev. Clementa Pinckney has nothing to do with this -- not mentioning God at the end of his pro-gay speech is all that matters.

It was a hell of a fine speech. Let's party all day!

Meet Dennis, The Iowa GOP-er All Buttered Up About Boner Fraud. Dennis Is Weird.