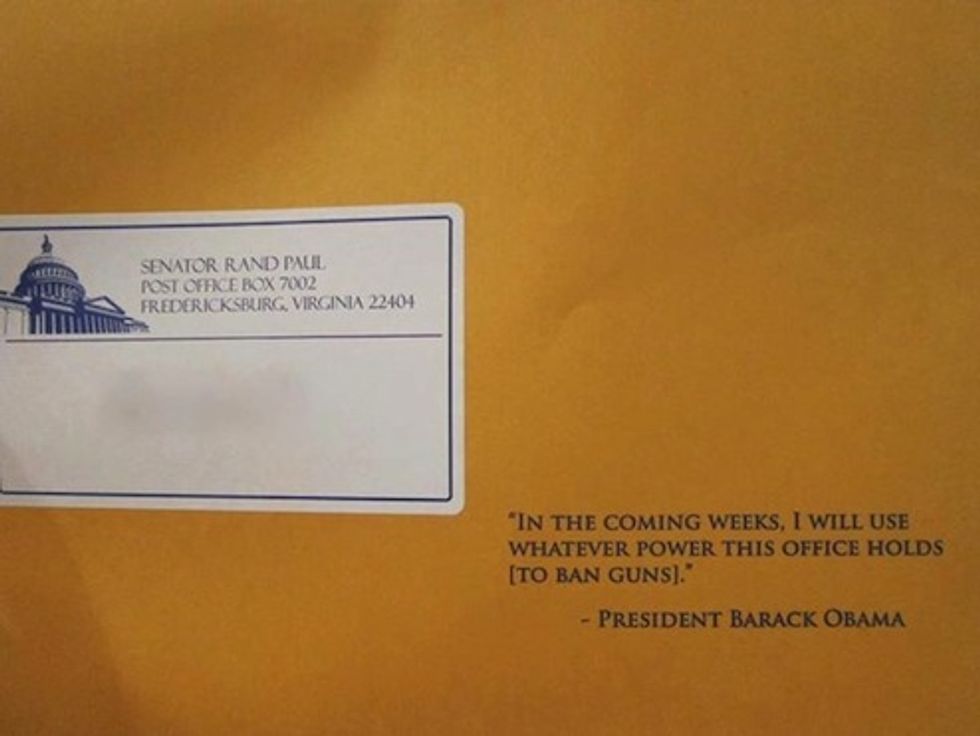 Those letters you get in the mail that beg you to give money to feed blind children to the whales in disempoverished communities are called "direct mail." Political organizations also use direct mail to raise money and recruit members because it's weirdly effective, especially with people aged 65 and over. One such organization, the gun fetishist group National Association for Gun Rights, recently sent a mailer with a [fullashit] quote from our president, Barack Obama, on the outside of the envelope. It reads:

"In the coming weeks, I will use

whatever power this office holds

Buzzfeed's Andrew Kaczynski helpfully provides the real quote, which Obama said after guns had nothing at all to do with the Sandy Hook Massacre:

“In the coming weeks, I’ll use whatever power this office holds to engage my fellow citizens, from law enforcement, to mental health professionals, to parents and educators, in an effort aimed at preventing more tragedies like this, because what choice do we have? We can’t accept events like this as routine.”

So that's pretty egregious on its own, given that it just completely lies about what Obama actually said, but here's the kicker: This letter was ostensibly from Senator Rand Paul! Look, that's his name on the return address label. Why is Kentucky's Rand Paul having his mail sent to Fredericksburg, Virginia? Is he leading a secret double life as a Fredericksburg Virginian? [Yes.]

It's always been the case that successful direct mail pieces embellish just enough to get your attention. Like, they probably can do it without you, and your donation didn't literally save Baby Christian's life. But in kind of a roundabout way, "you" could stand for all donations, and someone saved Baby Christian, so it's okay.

This "[to ban guns]" is not the same thing. One key difference is that dramatizing a good cause results in more money being raised  for a good cause, but lying about the president's views on gun control just makes people more paranoid and angry and prevents reasonable, popular gun control measures, and more people die, all because someone told you Bamz gonna come get your guns when Bamz never said any such thing.

Another key difference is that THIS HAS A SENATOR'S NAME ATTACHED TO IT. And WE ARE NOT EVEN SURPRISED ANYMORE, DESPITE THE CAPS.