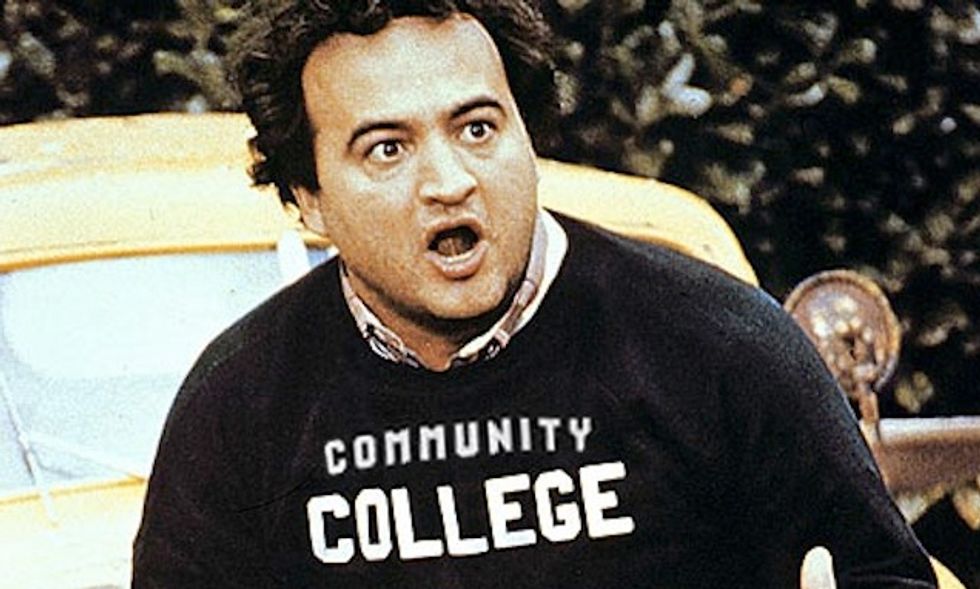 Now here's a nice thing if you're into "education" and "free stuff," which of course you are, because you're an over-educated socialist liberal. President Obama is heading to Tennessee today to announce a program that would provide qualified students with two years of free community college, as well as other reforms aimed at making higher education more accessible. Tell us more, New York Times:

The plan would allow anyone admitted to a community college to attend without paying tuition, so long as they enroll in a program meeting certain basic requirements and they remain on track to graduate in three years. Its broad goals are clear: to extend the amount of mass education available, for free, beyond high school — from K-through-12, to K-through-college.

“The president thinks this is a moment like when we decided to make high school universal,” said Cecilia Muñoz, director of the White House Domestic Policy Council.

As bigtime education nerds, we are pretty thrilled by the idea. The "America’s College Promise" proposal is based in part on a program instituted by Tennessee Gov. Bill Haslam, who will be at the podium with Perfesser Barry, as well as Tennessee's two Republican senators, Lamar Alexander and Bob Corker. Bipartisanlicious! It's also borrowing from a program started by Chicago Mayor Rahm Emmanuel, who won't be at the Tennessee unveiling, so the broadcast of the announcement won't have to include a 5-second delay.

Unlike the Tennessee and Chicago programs, the Obama proposal won't be limited just to recent high school graduates, so it will be available to our favorite students from our own days teaching community college: adults returning to school after some time in Life Or What Passes For It. To qualify for the federal plan, colleges would have to have programs that meet defined quality standards and which can transfer credits to four-year schools. The costs for the initiative would be shared with states, which would be required to pick up 25 percent of the bill.

This would be a Very Good Thing, and not merely because education is a good thing in itself. You got your community partnerships with employers, you got your well-educated workforce and the economic benefits that come from that, and you got your statistics showing that lower unemployment rates for college-educated people (though of course correlation is not causation, which is one of those things they learn you in college, along with how to write English good).

[contextly_sidebar id="bHYIhFRaxxwbgbjcM3ymseLRWAEuo7FQ"]Needless to say, not everyone is thrilled with the plan. Rage-fueled twitchyblister Michelle Malkin sees right through Obama and has sussed out his real motive:

We also have to assume that somewhere out there, Rick Santorum is dusting off his "What a snob!" speech. Remember how Rick Santorum became president by running against higher education? Or that time he said that most University of California campuses don't teach American History? (He was right about one: The Medical School definitely only teaches medicine.)

Also, too, we have this devastating fact-check by the Heritage Foundation's Lindsey Burke, who patiently explains that Free Community College Isn't Really Free, and that poors already get Pell Grants (she doesn't mention that you have to be no more than one step above homeless to qualify), so why do we need a "federal handout to the community college system" anyway? Also, she explains, because so many university students need remedial classes, expanding higher education will just let K-12 schools slack off since they'll figure that kids can get their catch-up work done at college. We're not inclined to listen too much to what Burke says, though, since she misuses "begs the question," which is the sort of dumb error she should have learned to avoid in college.

Happily, she has a solution! Since the only real reason college has gotten so expensive is that there's so much federal money supporting wasteful, bloated academic institutions, all we need to do is cut federal support for education, and the magic of the marketplace will take over:

Allow markets in higher education to work by limiting federal subsidies instead of increasing them, and costs will fall for students attending colleges of all types.

We're starting to think maybe the Heritage Foundation is trying to establish itself as a faith-based institution.