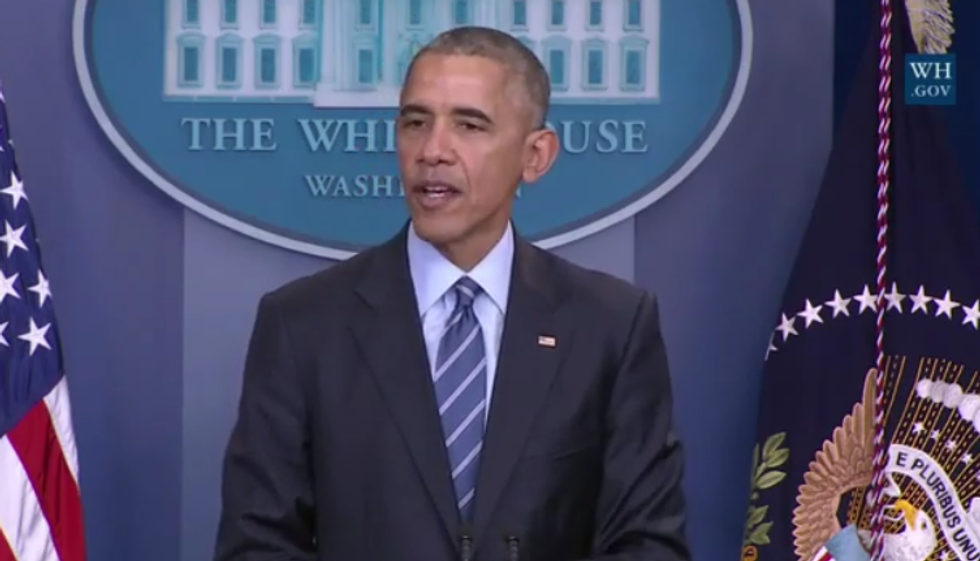 Your president, Barack Obama, has just concluded his final press conference of the year, and it was interesting, and kind of disappointing, honestly. He opened with a long statement on just how badass of a US and A preznit he has been these eight years, bragging about his eight-year record on reducing unemployment, increasing healthcare coverage for millions of Americans, cutting dependence on foreign oil by more than half, killing many terrorists, including Osama bin Laden (FUCK YEAH), keeping our homeland safe, negotiating the Iran nuclear deal ... like HOLY SHIT YOU GUYS, I have been the best president since ever, is what he seemed to be saying!

Obama also mentioned things we still need to work on, like gun violence, and he talked about the awful civil war in Syria, and said the world is "united in horror" at what the Syrian Assad regime and its "Russian and Iranian allies" have done to Aleppo, specifically saying that "these atrocities are on their hands." Obama said "Syrian regime and its Russian and Iranian allies" approximately ONE THOUSAND TIMES, just to make sure we (and Donald Fucking Trump) heard it. All this part was good!

BUT WHAT ABOUT DECLARING CYBERSEX WAR ON RUSSIA, you are asking? Well, he didn't say much about that, and what little he did say came once he started answering questions from reporters. Obama refuted the notion that he's been "squabbling" with Vladimir Putin's buttboy Donald Trump on the origins of the hacking, noting that he has just been stating the facts, which are that Russia Did It, No Shit You Guys. Donald Trump may be "squabbling," and he's free to do that over there in the corner, like he does.

[wonkbar]<a href="http://wonkette.com/608441/dear-media-hi-go-fuck-yourself"></a>[/wonkbar]Obama said it's "a little curious" that the American media is finally noticing that the Russian hacks, performed by Russia, were helping Donald Trump, since the very same American media were ABSOLUTELY OBSESSED with stupid Russian Wikileaks the entire election season, "including John Podesta's risotto recipe," which may or may not be good. Wikileaks should investigate that #scandal in its test kitchen, we think!

The president also made clear that America's response to Russia's hacking is something he's not going to yap a lot about, that we're not going to "thump our chests" about it or try to "spook" the Russians, and this is part of the reason a lot of Twitter thinks Obama was being a pussy:

[wonkbar]<a href="http://wonkette.com/608453/dear-james-comey-a-nice-thing-to-do-today-would-be-to-go-fuck-yourself"></a>[/wonkbar]The president also refused to talk much about whether Hillary Clinton lost the election BECAUSE of the Russian hacking, saying he would let the political pundits hash that out, but he confirmed that she was "treated unfairly," which is the understatement of the year. He was moreover given ample opportunity to take a big crap and shove FBI Director James Comey's election-meddling, Republican operative face in it, and he declined the offer. God, Barry, we love you but can you please go Psycho Barry for the last 30-some-odd days of your presidency, please? NO ONE WHO MATTERS WILL BLAME YOU.

As we were waiting for the presser to begin (because Obama was busy washing his cat and petting his hair and was LATE, like he always is), MSNBC and the Washington Post confirmed that Comey has finally signed on to the CIA's assessment that yes, definitely, Russia was actively trying to steal our election FOR DONALD TRUMP, which effectively whack-a-moles the Trump camp's fixation on how our stupid dumb intelligence community doesn't even agree on what happened, therefore it was probably a 400-pounder on his bed in New Jersey doing the hacking, and definitely NOT to help Trump. Maybe that is why Bamz did not poop on Comey, even though he fully deserves it.

The one moment of the presser that truly made us cheer was when Obama went into Teacher Mode and took us all to school on what pussies the Russians really are. He noted that Russia is a "smaller country" and a "weaker country" that literally makes nothing anybody wants to buy, and says America can only be weakened by Russia if we allow Vladimir Putin's scraggly ass to convince us (implied: through his surrogate baby boy Donald Trump) to give up our constitutional rights or silence journalists or discriminate against people. He noted though, with some worry, that it's remarkable and weird and fucked up that a full 37% of Republican voters actually approve of Putin, "the former head of the KGB," quipping that "Ronald Reagan would roll over in his grave."

Finally, the subject of what the Electoral College should do on December 19 (Monday), Bamz said he's not weighing in, presumably because he is not their real dad. (Wonkette will, though: They need to do their Federalist No. 68 duty and deny Trump the presidency. Period.)

After President Barry's press conference, he reportedly was on his way to Air Force One to go on his Christmas va-cay to Hawaii, where he MAY OR MAY NOT have been born, so that he might get nakie in the Pacific Ocean, like he always does, MERRY CHRISTMAS, BAMZ.