Obama Says 'Radical Islam' Three Times In Terrorism Speech. Are All The Terrorists Dead Yet? 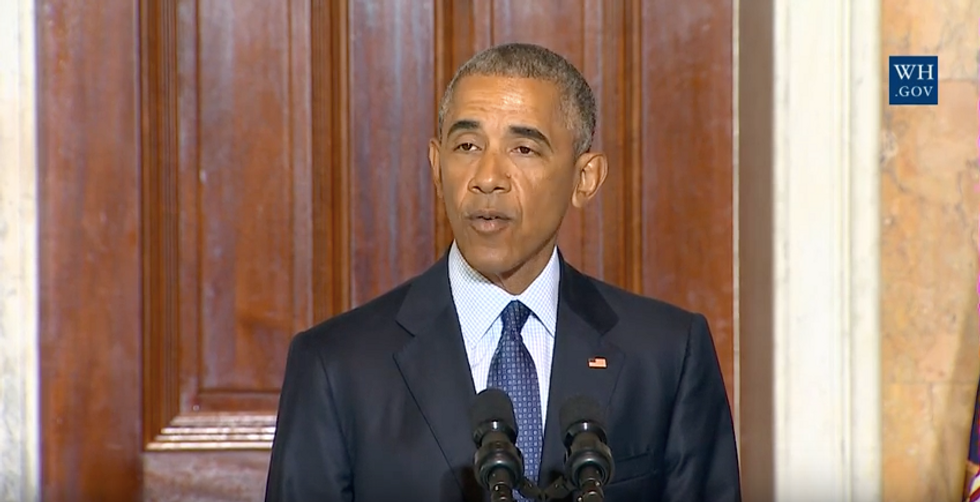 President Obama delivered a speech today RE: TERRORISM, in which he explained all of the things his administration has been doing in order to combat ISIL, including having taken out 120 top ISIL leaders, and causing them to lose significant amounts of territory, oil reserves and money.

Over the past two months, I’ve authorized a series of steps to ratchet up our fight against ISIL. Additional U.S. personnel, including special forces in Syria to assist local forces battling ISIL there, additional advisers to work more closely with Iraqi security forces and additional assets, including attack helicopters and additional support for local forces in northern Iraq. Our aircraft continue to launch from the U.S.S. Harry Truman, now in the Mediterranean. Our B-52 bombers are hitting ISIL with precision strikes. Targets are being identified and hit even more quickly. So far, 13,000 airstrikes.

This campaign at this stage is firing on all cylinders and as a result, ISIL is under more pressure than ever before. ISIL continues to lose key leaders. This includes Salman Abu Shabib, the senior military leader in Mosul, (inaudible), who plotted external attacks; Shaker Wahib, ISIL’s military leader in Iraq’s Anbar Province; and Maher al-Bilawi, the top ISIL commander in Fallujah.

So far we have taken out more than 120 top ISIL leaders and commanders. And our message is clear, that if you target America and our allies, you will not be safe. You will never be safe.

So that was good to know! He also brought up some ways in which Republicans, specifically, have made it difficult to fight terrorism. For instance, it has been 420 days since he first nominated Adam Szubin, who has served in both Democratic and Republican administrations, for undersecretary of Terrorism and Financial Intelligence, and the Senate has refused to even allow a vote. Because they are weird babies who are bizarrely focused not on outside enemies but the one in the White House, we guess.

Oh, and there's that whole thing where they love the Second Amendment too much to deny terrorists the right to assault rifles!

It is absolutely true, we cannot prevent every tragedy. But we know that consistent with the Second Amendment, there are common sense steps that could reduce gun violence and could reduce the lethality of somebody who intends to do other people harm. We should give ATF the resources they need to enforce the gun laws that we already have.

People with possible ties to terrorism, who are not allowed on a plane, should not be allowed to buy a gun. Enough talking about being tough on terrorism. Actually be tough on terrorism and stop making it easy as possible for terrorists to buy assault weapons.

Reinstate the assault weapons ban, make it harder for terrorists to use these weapons to kill us. Otherwise, despite extraordinary efforts across our government, by local law enforcement, by our intelligence agencies, by our military — despite all the sacrifices that folks make, these kinds of events are going to keep on happening. And the weapons are only going to get more powerful.

Oh man, such radical things! Of course, we can't do any of those things, because some people think that mass shootings are a fair price to pay for the ability to own assault weapons. You know, for hunting and personal protection! And in case of tyranny! Regular old guns that can only kill one person at a time are far too inefficient!

Of course, Presumptive Republican Presidential Nominee Mister Donald J. Trump does have some ideas about a better way to fight terrorism. A nice, neat, uncomplicated idea! One weird trick that will stop all the terrorism forever! Never mind all that complex stuff the administration has been doing; all that needs to be done is for the President to say the three magic words "RADICAL ISLAMIC TERRORISM" and ban new Muslims from entering the country, and then poof! All of the terrorism will be gone!

And let me make a final point. For a while now, the main contribution of some of my friends on the other side of the aisle have made in the fight against ISIL is to criticize the administration and me for not using the phrase “radical Islam.” That’s the key, they tell us. We cannot beat ISIL unless we call them radical Islamists.

The answer is none of the above. Calling a threat by a different name does not make it go away. This is a political distraction.

There has not been a moment in my 7.5 years as president where we have not able to pursue a strategy because we didn’t use the label “radical Islam.” Not once has an adviser of mine said, “Man, if we use that phrase, we are going to turn this whole thing around,” not once.

Really? That is crazy! Tell us more!

Groups like ISIL and Al Qaida want to make this war a war between Islam and America, or between Islam and the West. They want to claim that they are the true leaders of over a billion Muslims around the world who reject their crazy notions.

They want us to validate them by implying that they speak for those billion-plus people, that they speak for Islam. That’s their propaganda, that’s how they recruit. And if we fall into the trap of painting all Muslims as a broad brush, and imply that we are at war with the entire religion, then we are doing the terrorists’ work for them.

WOAH. So basically what the President is saying here is that the sort of solutions your drunk uncle would come up with at dinner and deem to be "commonsense solutions" are not actually very sensible at all? How could that be? It's almost like this is some kind of complicated thing that can't be immediately solved through bravado and rashness! Weird!

The President also had the gall to mention that America is a country founded on the principle of religious liberty -- meaning that anyone can be any religion they want, and we don't have religious tests for anything -- and that if we give that up in order to fight these terrorists, then they have already won.

It's very rare that Obama throws down like he should, which some of us on the Left have felt a little frustrated with over the years, but in this instance he did, and he did good. Of course, it's not going to help. It's not going to change any minds, because there are too many people out there who just feel better believing that there is "one weird trick" that could stop all of the terrorism forever, and who would just rather hear that the President refuses to do these things because he wants the terrorists to win, because he is a Secret Muslim, then process the fact that this is all more complicated than they can comprehend. Because that's the one thing that's too scary to admit.