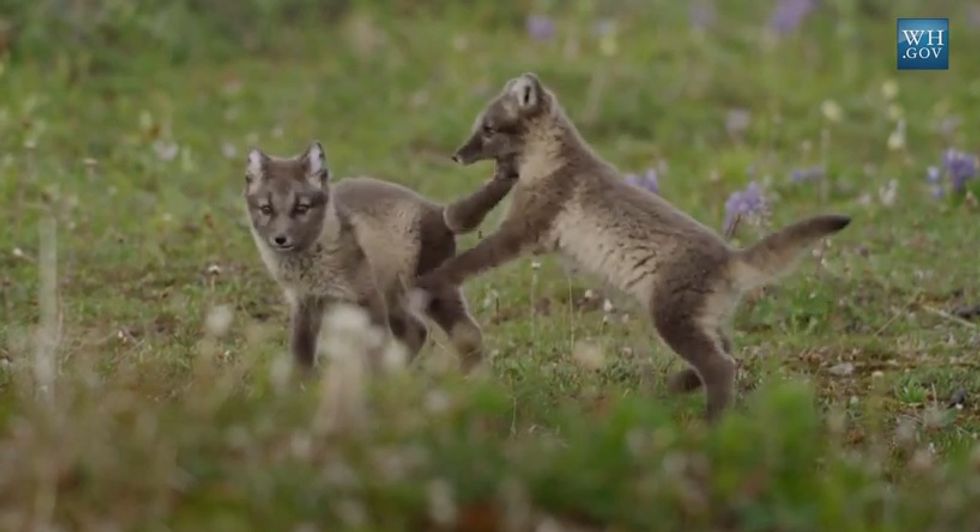 With the Republicans' top priority being the building of a pipeline to transport some of the dirtiest petroleum on the planet, we're pretty chuffed to see that Barack Obama is replying by announcing Sunday that he'd very much like to designate Alaska's Arctic National Wildlife Refuge as protected wilderness, so it won't be drilled, baby, drilled. Wilderness designation would make the 12 million acres of the Refuge permanently off-limits to development, including oil exploration. Obama announced the plan with a pretty nifty video:

“Alaska’s National Wildlife refuge is an incredible place -- pristine, undisturbed,” he said. “It supports caribou and polar bears, all manner of marine life, countless species of birds and fish, and for centuries it supported many Alaska native communities. But it’s very fragile.”

Needless to say, the idea is not being met with joy from Alaska's Republicans, who don't have a very high opinion of caribou and other nonproductive takers (it is a known fact that Arctic wildlife pay no taxes at all, even as they get in the way of oil rigs). Besides, it is also a well-known science fact, according to Louie Gohmert, that caribou like oil pipelines so much that they have hot heavy caribou sex around them all the time. Sen. Lisa Murkowski, who conveniently chairs the Senate Energy and Natural Resources Committee, seems to have taken Barry's announcement as a declaration of war:

I have tried to work with this administration, even though they've made it extremely difficult every step of the way ... But those days are officially over. We are left with no choice but to hit back as hard as we can.

We're not entirely sure what that means, but given past performance, we're betting she's talking about either a government shutdown or another repeal of Obamacare.

Also, get ready for Fox News to start telling us about the lazy lifestyle habits of polar bears, who claim they need "protection" even though most of them don't have jobs and just lie around drinking Coca-Cola.