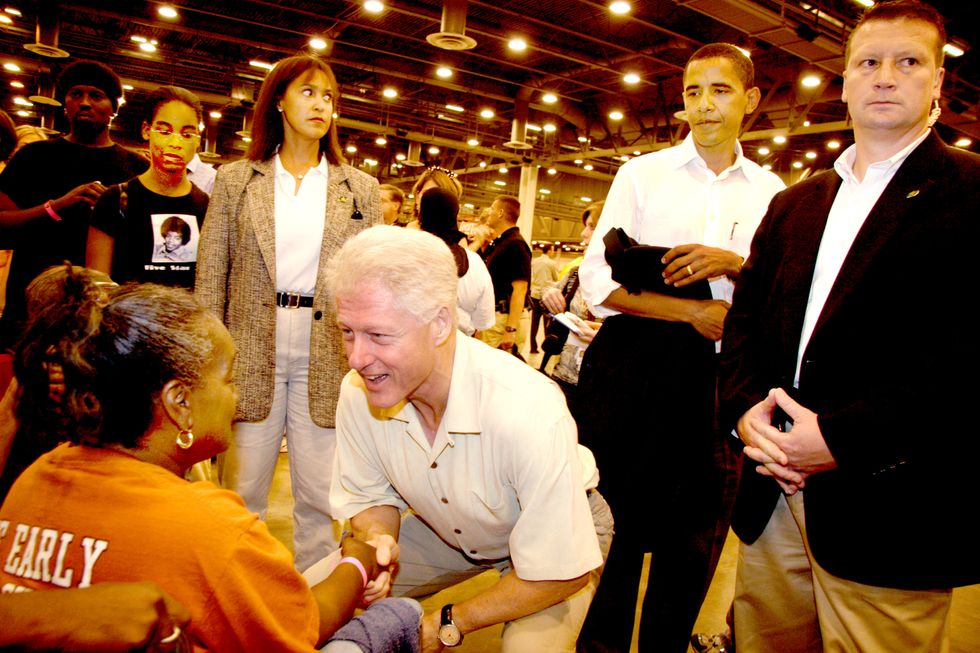 Showed the fuck up.

There's a thing going around Facetube and Twitstagram, where people are saying HAW HAW, REMEMBER THAT TIME NOBUMMER WENT GOLFING DURING KATRINA? It is very funny, and you might not realize it's mostly bots making those tweets, because Trump supporters really are that stupid. You might have seen this:

Some of the ones that aren't bots are now saying HAW HAW I WAS JUST MAKING A HILARIOUS JOKE, because dumb wingnuts who can't remember when Obama became president are so good at #jokes.

But since stupid people and bots brought it up!

In September of 2005, Barack Obama was a young senator from the state of Illinois, which didn't suffer a direct hit from Katrina. But that didn't stop him from traveling to Houston with Bill Clinton and George H.W. Bush, to spend time with Katrina refugees there. See? There's a picture above!

Here's another one, where SENATOR Obama is holding a youngster, unlike Donald Trump, who did not hold youngsters or visit with refugees in Corpus Christi on Tuesday, but instead modeled his fucking "USA" hat and yammered about about how "WATER IS THE BIGGEST" and bragged about how many hurricane survivors came to see him speak.

After his trip, Obama spoke about the devastation. Here is a wee excerpt:

I just got back from a trip to Houston with former Presidents Clinton and Bush. And as we wandered through the crowd, we heard in very intimate terms the heart-wrenching stories that all of us have witnessed from a distance over the past several days: mothers separated from babies, adults mourning the loss of elderly parents, descriptions of the heat and filth and fear of the Superdome and the Convention Center. There was an overriding sense of relief, for the officials in Houston have done an outstanding job of creating a clean and stable place for these families in the short-term. But a conversation I had with one woman captured the realities that are settling into these families as they face the future.

She told me "We had nothing before the hurricane. Now we got less than nothing."

We had nothing before the hurricane. Now we got less than nothing.

In the coming weeks, as the images of the immediate crisis fade and this chamber becomes consumed with other matters, we will be hearing a lot about lessons learned and steps to be taken. I will be among those voices calling for action.

The rest of the speech was about what we must do NOW to fix FEMA's shitty response to Katrina, and to make sure people are never again left behind like they were after that storm.

In 2012, Barack Obama was president. And because there are Trump tweets for LITERALLY EVERYTHING, we have these to LOL at:

Wait, did Trump get his little hind paws wet in Corpus Christi on Tuesday? We forget. Did he borrow Melania's stiletto galoshes to protect the bone spurs in his feet?

His $5 million offer, if you will remember, was to donate to the charity of Barack Obama's choice if and ONLY if Obama coughed up his college records and proved he wasn't born in Kenyo-Nesia. Obama didn't bite, because A) HE WAS BORN IN AMERICA and B) fuck Donald Trump.

Of course, if Bamz would like to make a similar dare, that would be hilarious and good. How about $5 million to hurricane victims (we'd say Trump's charity of choice, but that would be the Trump Foundation, and somehow he'd end up using the money to buy orange make-up for his balls) if he'll release HIS MOTHERFUCKING TAX RETURNS?

Indeed, he was. Here's a pic from that trip: