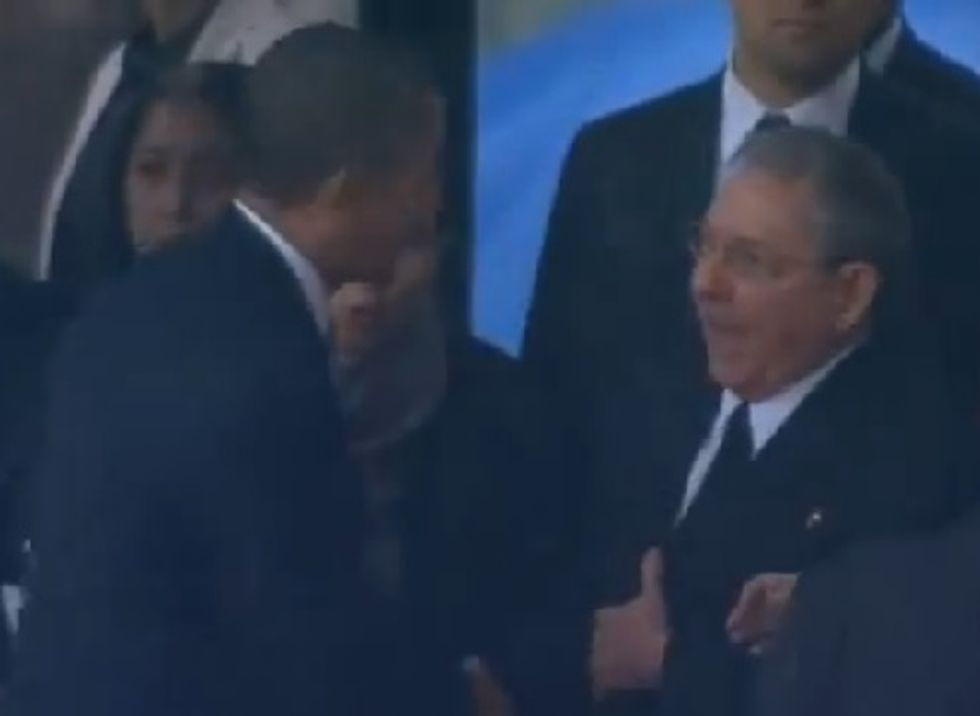 Monstrous America-hating monster Barack Obama touched a communist today at the memorial service for Nelson Mandela, leading to fairly predictable speculation that the handshake with Cuban President Raul Castro was either evidence ofwarming relations between the two countries, or proof that Obama shares Mandela's love for communism, terrorism, and hating Israel. Plus, maybe Obama bowed. Check the video! Was that a bow? Castro's shorter, so yeah, definitely a bow! Did he whisper state secrets into the communist leader's ear? INPEACH!

Besides, everybody knows you are supposed to spit on people at state funerals and then kick them in the nuts. This Barack Hussein Obama has obviously never read Miss Manners.

At Dead Breitbart's Home for Slithy Toves, Joel Pollak noted that this is only the latest in a string of outrageous dictator-touching incidents by the President:

Obama campaigned in 2007-8 on a promise to meet American enemies "without preconditions," and met and embraced the late Hugo Chávez of Venezuela in 2009. He has also pushed for negotiations with the Iranian regime -- long before the current "moderate" president took power. President Obama seemed pleased to meet Castro, who also spoke at the memorial, and the handshake was broadcast live on television worldwide.

Also, too, John Nolte worried that

For those who believe in human rights and liberty, the sight of our president bounding up some stairs to energetically shake hands with Raul Castro, dictator of Cuba, was more than a little unsettling -- regardless of the circumstance.

The circumstance being a memorial for a world leader, of course. Again, totally unprecedented, because no American president has ever held hands with the leader of a repressive regime, at least not one that we weren't allied with. OK, maybe Reagan shook hands with some Russians, but that is totally different, too. It just is.

And of course, Sen. Marco Rubio got in on the act, wishing that Obama had "asked [Castro] about those basic freedoms Mandela was associated with that are denied in Cuba," because that's exactly the kind of topic that Marco Rubio usually brings up at a memorial service.

What the hell, Barry, they're going to pile on no matter what you do. Next time you shake hands with a foreign leader, slip them a little tongue.