Obamacare Death Panels Oklahoma Old People, By Giving Them So Much Money 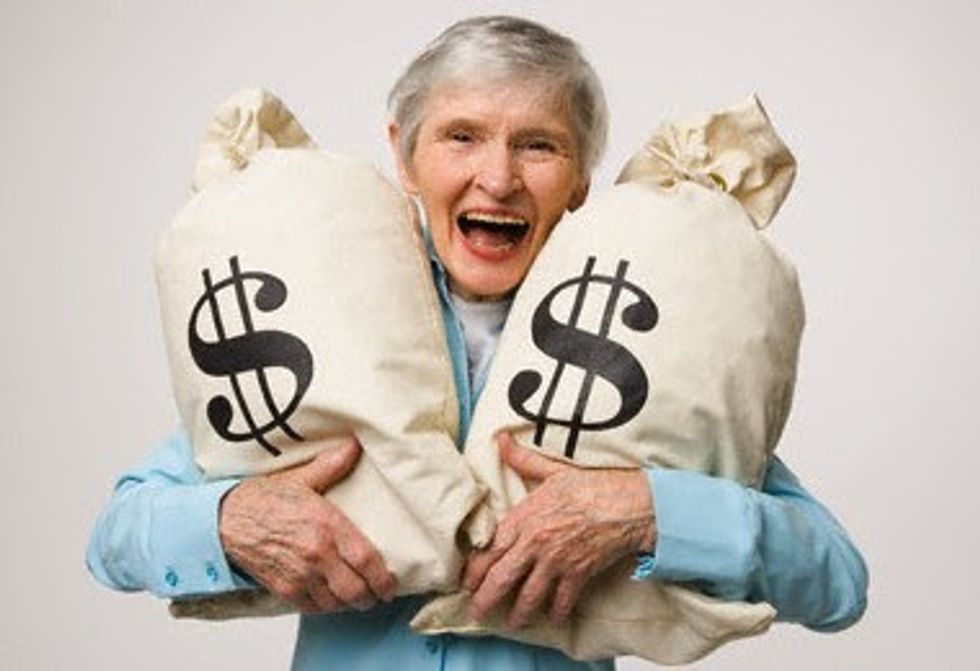 U.S. Americans have been lately wondering why their Oklahoma Grandma has been sending them TWO crisp twenties for their birthdays these past few years. Is she sick? Has she reached the point where she can't count moneys anymore? GOOD NEWS, it is not that, your Okie Mee-Maw is just fine! It turns out that, due to the Affordable Care Act, more popularly known as "Obamacare," Grandma Rose has a bit more cash to throw around, stemming from Obamacare's efforts to close the so-called "doughnut hole" in Medicare Part D, a dumb coverage gap that causes seniors to spend many extra dollars per year on prescriptions that they actually need. So far, though, since Black President death paneled all the Olds in 2010, Oklahoma grandmas (and grandpas, and grandsgenders, and also disabled people covered by Medicare who are not "grand" age) have saved $191 million on their prescription drugs, hurray! You know who is going to the race track this weekend? Yes, it is Grandma Rose and her 65,158 best friends:

Oklahoma seniors and disabled people on Medicare have saved nearly $191 million on medicine in the last four years because the coverage gap in the prescription drug program has been narrowed, the administration said Tuesday.

Last year, the savings amounted to $60.3 million for 65,159 Oklahomans on Medicare, according to the Department of Health and Human Services.

The coverage gap, also known as the “doughnut hole,” has been part of the Medicare Part D program since Republicans created it in 2003. The hole meant considerable out-of-pocket expenses once a senior’s drug costs reached a covered limit of about $3,000, and before the senior reached the level where catastrophic coverage kicked in.

That is nice! And also, somehow, the opposite of "death panels"? It's not just Oklahoma either! Apparently, it's $15 BILLION nationwide.

Because Wonkette is very good at math (or good at plugging math problems into the search bar), we have been able to calculate that the savings come up to an average of $925 per senior citizen or disabled Oklahoman. What does that mean? More money for your aforementioned birthday, more money for bingo, and also more money to prevent your senior citizen loved ones from being mired in medical bankruptcy and unable to live out the golden years of their lives with any shred of dignity. THANKS OBAMA.

And here is the thing! Obamacare isn't even DONE killing your grandmother with money. According to The Oklahoman, the intended effects of the law are that the "doughnut hole" will be closed by 2020, which means we are only halfway there! WHOA HEY, you will say in 2020, when Grandma Rose sends you a nice gift card for dinner for FOUR at the Olive Garden, not even for your birthday, but just 'cuz she loves you. Maybe this Obamacare thing wasn't so terrible after all!

And sure, we know that, because Oklahoma, many of the people who are currently beneficiaries of this largesse are probably the same fucking Teabaggers who have been holding signs saying, "Keep your government out of my Medicare!" But as we have learned recently, Wonkette is kind of sort of okay with people doing better and not dying/losing everything they have, simply because they are assholes. We paid medical bills for one of the biggest cockgobblers of them all, that anti-Obamacare Arizona sheriff, Richard Mack, who ain't got no fuckin' Obamacare, because we are NICE, and also because there's nothing like saving the world and calling it a dumbfuck at the same time, it gives us The Feels.

So if your Oklahoma Grandma Rose is one of those Fox News-watchin' patriots, and she's pretty sure the only reason she's got this additional money is that she's been extra sure to turn in every glass bottle she finds lying around Shady Pines, just let her believe that. You get a happier, richer grandma, and more presents, and also the secret knowledge that it only happened because of the evil Muslim in the White House, for whom you voted, twice.