Texas Gets Ready For Its FEMA Camps. Bye Texas! 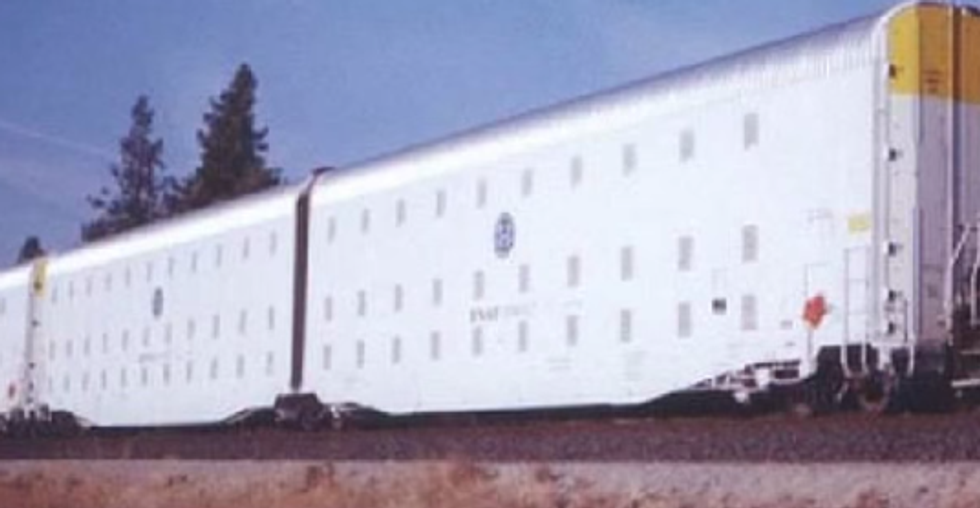 This Operation Jade Helm 15 conspiracy theory just gets MORE AND MORE REAL. If you'll remember, the U.S. military is set to do a totally routine exercise this summer in the western states, which has led obviously sane Texans to conclude that Obama has decided to invade Texas, which is strange, since Obama already controls Texas, GET YR GUNS READY! They're either doing this because ISIS is right across the Mexican border waiting to attack (no they aren't), or because it's just time for Obama to declare himself emperor and do martial law to everybody. And now we have the trains to prove it!

An anonymous Texas Ranger -- gotta keep his name and whereabouts a secret because of The Threats, obviously -- wrote a nice email to a whackjob conspiracy theory radio program revealing that there are FEMA trains all over Texas right now, he hasn't seen them, but he knows somebody who knows somebody who has, and they are full of shackles and EVERYBODY PANIC:

This indicates that these trains will be used to transport prisoners of some sort. I know from reading your articles that your default belief will be that these are for American political prisoners and will be transported to FEMA detention camps of some sort. We have been told by Homeland that these trains are slated for transporting captured terrorists, non-domestic. We are not sure we can trust this explanation because Homeland is keeping a lot from us and we are growing increasingly uncomfortable with their presence in Texas.

How can we believe Homeland Security? It makes much more sense to assume that Barack Obama and Loretta Lynch are going to personally oversee the destruction of Lubbock, Texas, for no other reason besides pure unmitigated fun. The government says all kinds of stuff, like "we landed on the moon" and "Elvis Presley is dead," they are not to be trusted. This ranger dude is pretty sure that, even if ISIS attacks from their totally real base on the other side of the Rio Grande, those trains are for Americans:

I do believe the ISIS threat is legitimate. But you are also correct to suspect the motives behind the JH15 drills. They are clouded in secrecy and we have been shut out regarding their operational intent. The people of Texas and all of the United States of America should be pushing back against JH15. [...]

None of my brothers trust Homeland. We will have to see where this is going but I have a bad feeling.

Now, to be fair, other conspiracy wingnuts are showing a degree of skepticism, since we don't even know if this Texas Ranger is real -- maybe he is an ISIS impersonating an American moron! -- but that doesn't mean we shouldn't ask questions, because Obama:

Our freedoms are being eroded daily by the hostile Obama Administration and liberal democrats who would love to remove from society those they consider political undesirables.

Whatever the reason, train cars laden with prison shackles is a shocking sight to see in America.

Why yes, it is. Assuming anyone has actually SEEN them, since even the anonymous letter-writing Ranger who may or may not exist admits he has not seen them with his own eyes. Let's all panic, though, because the REAL conspiracy is obviously the fact that people don't believe FEMA trains are coming to get them and take them ... somewhere! Probably to the tunnels under the shuttered Walmarts, where the Chinese can kill them. And if you can't connect all these dots, then you're just NOT PAYING ATTENTION.