Obama's Gay Army Secretary Nominee On Hold, Because Sen. Pat Roberts Is Being A Dick 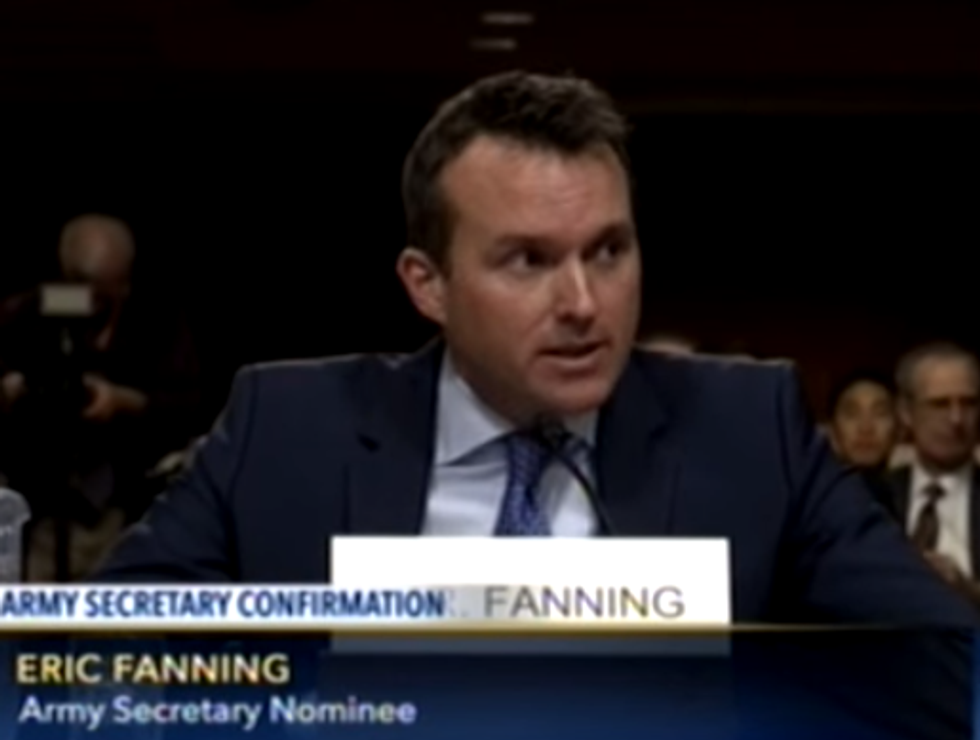 We are all by now very used to Senate Republicans blocking President Obama's nominations because they goddamn hate Obama, and their hatred for him is way more important than, say, having a full Supreme Court. Or fully-staffed lower courts. And so forth.

But a weird thing is happening right now in the Senate: O's nomination of Eric Fanning, a self-proclaimed gay person, as secretary of the Army is on hold, but for the most part, Senate Republicans aren't even going "EW GAY!" In fact, according to the New York Times, he's widely viewed as being highly qualified for his position, even if he does gayness in his spare time! But there is one hitch:

Mr. Fanning has stood out because there are few questions about his qualifications, but he is being held up by just one senator. If confirmed, Mr. Fanning will be the highest-ranking openly gay Pentagon official.

Standing in the way of that happening is Senator Pat Roberts, Republican of Kansas, who has placed a hold on his nomination, insisting that the Obama administration tell him that it will not move any detainees from Guantánamo Bay, Cuba, to Fort Leavenworth, Kan.

Huh, well that's weird! The Times reports that even Sen. John McCain, who is known for being Obama's best friend, thinks Sen. Roberts is being a dick, pointing out on the Senate floor that Fanning wouldn't even be involved in what happens to Gitmo detainees if/when Obama FINALLY FUCKING CLOSES that horrible place.

Now, you might be thinking Roberts is just being a dick and saying it's about not wanting those terrible Gitmo detainees -- many of whom (COUGH COUGH) we shouldn't still be holding in the first place -- back in his state of Kansas, when in reality it's because Roberts doesn't like EW GAYS.

But actually Roberts did the same thing to the last Army Secretary nominee, John McHugh, in 2009. McHugh doesn't do any gay stuff that we are aware of, and at the time, Roberts described him as a friend. Roberts eventually relented, because Obama promised him none of those scary Muslin folk would be transferred to Kansas, but for some reason, Obama won't make that promise this time.

The good senator from Kansas just wants everybody to know that this is absolutely not personal, as he explained back in January:

[wonkbar]<a href="http://wonkette.com/600711/ted-cruz-wishes-child-sex-slaves-would-think-of-the-unborn-babies"></a>[/wonkbar]Huh! So this is definitely not like Sen. Ted Cruz (who is running for re-election in 2018, so commence vomiting now) holding up a bill to end child sex slavery because his puny punchable face is all wee-weed up about abortion, a completely unrelated topic.

Maybe the Homogay-Industrial Complex can relax, then, if this one isn't actually about them. (For a Salon-pitch that says it totally is, click here. Because Sen. Roberts is very anti-gay. Ooh ooh! #WonkettePitch to #SalonPitch: MAYBE IT'S BOTH!)

[wonkbar]<a href="http://wonkette.com/594114/mike-huckabees-shriveled-manhood-threatened-by-gay-homosexual-army-secretary"></a>[/wonkbar]What's funny is that certain irrelevant gay-hatin' wingnuts who used to run for president, like a certain Mike Huckabee, were SO HORRIFIED when Obama made Fanning the acting Army secretary. Huckabee screeched his beef lips about "appeasing America's homosexuals" and how "homosexuality is not a job qualification," so Huck is probably pretty fucking happy right now, as he munches on squirrel flakes in whatever backwards Arkansas hidey-hole he lives in, to see that Fanning's nomination is on hold, for completely unrelated reasons. In fact, we bet Huck's pretty sure the real reason is because Jesus said no fags in the Army.

You might be wondering, though, can we still call Sen. Pat Roberts a fucking dick? SURE CAN, YOU BET! Because it's really not just that Roberts doesn't want any scary Muslims (many of whom aren't even charged with anything, or maybe they're like this guy, who was held because the U.S. thought he was pals with this one terrorist dude who wasn't actually a terrorist) stinkin' up his beloved Leavenworth. It's also that Roberts doesn't actually want Guantanamo closed in the first fucking place.

Look, here he is back in February, making a hilarious joke about what he thinks of Obama's plan to close Gitmo:

.@POTUS, this is what I think of the "plan" to close #GITMO and send terrorists to the United States. pic.twitter.com/5ceyu5I2tc

So yes, while you watch this excellent Gitmo report from Samantha Bee, you may commence calling Pat Roberts a fucking dick.