Obamas Have 9 Kinds Of Pie For Thanksgiving, Wingnuts Outraged 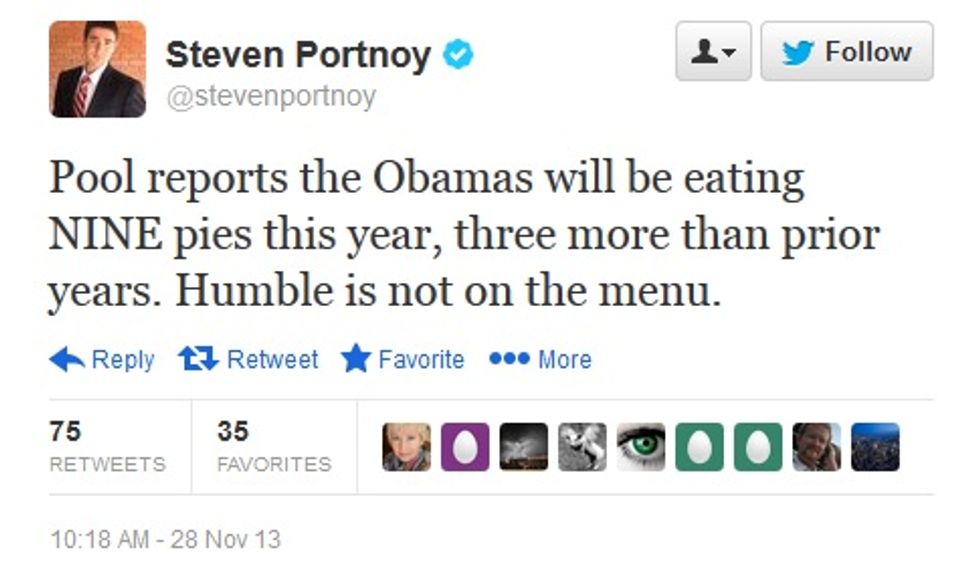 We guess Barack Obama must have mentioned God in his Thanksgiving proclamation this year, since we haven't seen a million angry blog posts bitching about it. (And there it is -- "we rise or fall as one Nation, under God" -- a blatant attempt to make up for his Gettysburg libel, too.*) Thankfully, even if they can't trot out the "war on religion" trope, wingnuts can still accuse the Obamas of being Louis XVI and Marie Antoinette, because as has been widely reported, the White House served nine types of pie at Thanksgiving this year -- or as the Daily Mail headline put it, "NINE different types of pie." This is of course the worst sort of hypocrisy, since 1) No other president has eaten well while some Americans were unemployed and 2) Michelle promotes healthy eating, but for a holiday dinner they didn't eat only kale and rice cakes.

But don't worry; the good folks at Twitchy were on it, complete with some gratuitous mockery of those lazy food stamp takers:

While the rest of us peons slave away and starve by the millions because of the nefarious GOP cuts to the government teat, the royal family in the White House will be decadently dining on delicacies earned by the sweat of your brow. Indeed, gluttony is the reason for the season, as Thanksgiving pie intake at the White House is reportedly up a whopping 50%, from six pies last year to nine this year.

No doubt First Lady Michelle Obama will be doing a few extra “Let’s Move” exercises to work off all those calories.

Should we mention that, like every other first family, the Obamas actually pay for their own meals? Nahh, why bother? Also, for the record, the decadent delectables were "huckleberry pie, pecan pie, chocolate cream pie, sweet potato pie, peach pie, apple pie, pumpkin pie, banana cream pie [and] coconut cream pie," which is probably proof that Obama is a Muslim or something.

On a tangentially related note, because "fitness," the Obamas have also alienated strange Pixie-Man Richard Simmons, who has offered to help Michelle Obama with the "Let's Move" campaign, but says he has been spurned:

"I love Michelle Obama. I wanted to meet them, both of them. They have rejected me totally," Simmons said.

"I'm just not their set of sheets," he said.

This is an expression? In any case, Richard Simmons should know that the Obamas only use the finest 2-million thread count sheets, bought with the sweat of other people's brows.

YOU BE NICE TO RICHARD SIMMONS, NOBAMAS!

* A few sites did manage a grumble or two at the proclamation's shout-out to teh gheys: "This tradition reminds us that no matter what our background or beliefs, no matter who we are or who we love, at our core we are first and foremost Americans."