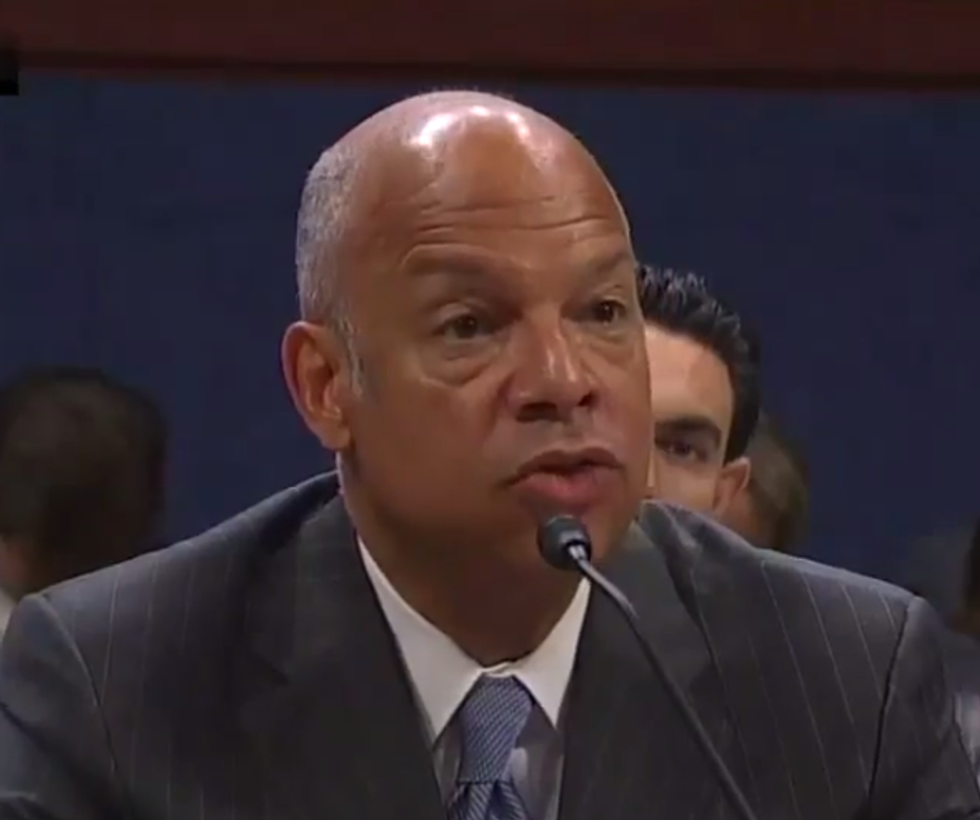 Jeh Johnson is easy on the eyes!

Former Homeland Security chief Jeh Johnson testified before the House Intelligence Committee Wednesday, in another of the endless hearings about just how much Russia stuck its ding dong inside the 2016 election, and moreover how much Donald Trump and/or his associates may have helped a Russian buddy out, by jamming that Russian ding-dong in just the right places. Meanwhile, the Senate Intelligence Committee interrogated other Homeland Security and FBI officials on the same topics. News was made!

For instance, Sean Spicer and the Trump White House may not be able to sound out the words "we only won because of Russia" without sobbing so hard it knocks the wind out of them, but Jeh Johnson can:

Fmr. DHS Sec. Johnson: Russia orchestrated cyberattacks to influence the election at Putin's direction: "That is a fact, plain and simple." pic.twitter.com/1Q3NKnLInP

In 2016, the Russian government, at the direction of Vladimir Putin himself, orchestrated cyber attacks on our nation for the purpose of influencing our election. That is a fact, plain and simple.

Responding to another question from idiot boy Rep. Trey Gowdy, Johnson confirmed that the assessment that Russia is guilty was "a clear case," and also "perhaps, beyond a reasonable doubt." Bet they didn't even check with any New Jersey 400-Pounders to see if they did the hacking like Trump suggested!

Fmr. DHS Sec. Johnson: "It was a pretty clear case. Perhaps, beyond a reasonable doubt" that the Russian gov't was behind the DNC hacks. pic.twitter.com/nhaFUQamBx

The department's decision to keep "secret" the number and names of states that were attacked is "just crazy, in my mind," [said] Warner ...

If the government doesn't "tell the public how many states were attacked, or potentially how many could be attacked in the next cycle, I don’t think we get to where we need to be" in protecting the election system for the 2018 and 2020 elections, Warner added.

Politico notes that Bill Friestap, assistant director of the counterintelligence division at the FBI, said his people have a "number of investigations open" into the Russian hacking, but he didn't share his secret information either.

If you'll remember, we learned last week that ACTUALLY 39 states were targeted (at least), and that the Russians even tried to change voter information in databases in some cases. Were Russians successful at changing votes? Golly, we just don't know. Jeanette Manfra affirmatively told Chairman Burr that votes weren't changed, but we have a feeling they'll repeat that line until they find evidence that they were, at which point OOPSIE.

We know from the NSA document leaked by leaky leaker Reality Winner that the GRU (Russian Military Intelligence) targeted companies that make voting machines, and also state election officials with access to voter records. It sure would be nice if states like Georgia had a paper trail or would allow audits of their systems, considering how there was a special election JUST THIS WEEK, AHEM! But they won't, as former DHS secretary Jeh Johnson wrote in his prepared remarks for the House Intel Committee. We're not saying Karen Handel's win over Jon Ossoff was illegitimate or anything, just that there's reason to believe the Russians are screwing around with a lot more than the president's alleged pee fetishes.

The Daily Beast reported Wednesday that, despite what many people assume, the Department of Homeland Security actually hasn't done any major audits of state election systems to make sure Russia wasn't able to change votes. DHS tried, of course, but a lot of states (GEORGIA!) were like "Stop federal overreaching into our private state parts!" Meanwhile, The Daily Beast says states that DIDN'T queen out over being offered help by DHS "either use audit procedures that are considered inadequate or don’t audit their election results at all." So that just sounds fan-dam-tacular! We feel like our election systems are super secure right now, ayup!

But anyway, BACK TO THE HEARINGS. Adam Schiff, ranking member on the House Intel Committee, asked Jeh Johnson WHY THE HELL DIDN'T HOMELAND SECURITY SAY SOMETHING SOONER? Johnson said well they did say something, but they didn't want to look like they were "taking sides" in the election. Also, there was this one little motherfucker named Donald Trump, who kept bitching on the campaign trail that the election was going to be "rigged" against him, which made it very difficult for them to look impartial:

One of the candidates … was predicting that the election was going to be rigged in some way. So we were concerned that by making a statement that we might in and of itself be challenging the integrity of the election process.

Yep, Trump always said the election would be "rigged," and he also said Hillary Clinton's email "scandal" was "bigger than Watergate." We think it's safe to say at this point that everything Trump said about Hillary was just him projecting about himself.

Schiff also asked if James Comey would have opened a counterintelligence investigation into the Trump campaign on whether they colluded with Russia just because he was having a "hunch," and Johnson was like PFFFFFFFT, and answered that Comey would have had to see EVIDENCE of such:

Schiff: Would Comey have opened a counter-intel investigation on a presidential campaign "on mere hunch?"

Well that's just the biggest fucking shock of the century, like OMG, we are lying on the floor now, in shock!