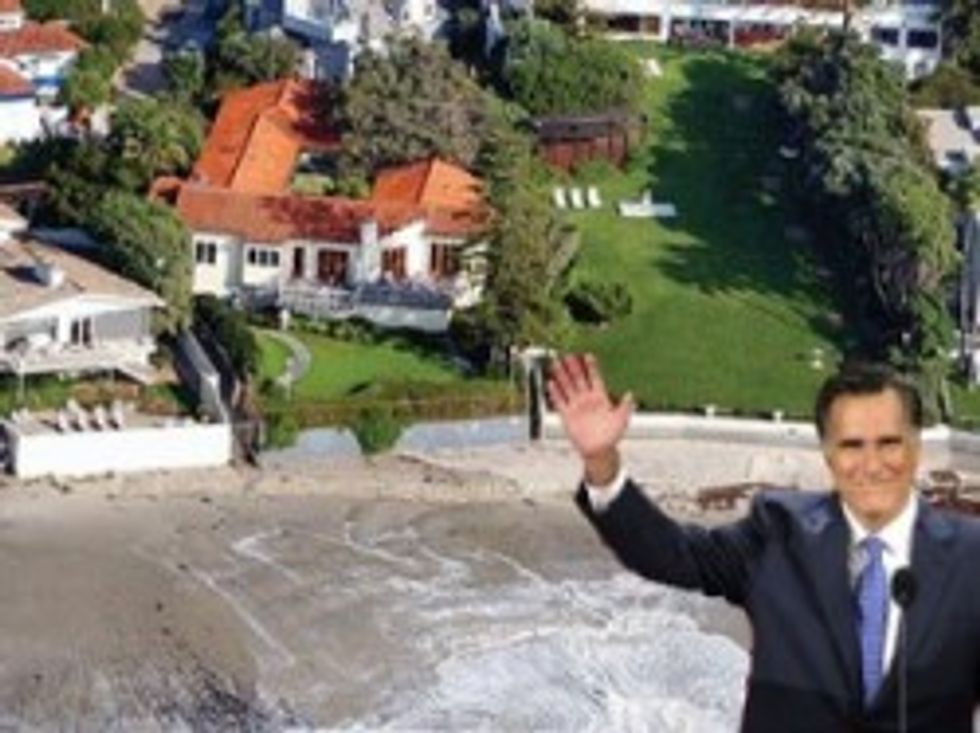 Oh LOOK what a typist at the Los Angeles Times found out about the Romney’s multi-million dollar home in La Jolla (that’s pronounced La HOY-uh for you Midwesterners, and yes,this is the one with the $55,000 car elevator)! Turns out that the Romneys got a tax cut of about $109,000 by having their lobbyist/lawyer request that the county reassess the $12 million dollar home several times over the years. Of course, the Romneys used the money from this tax cut to trickle a bunch of good jobs with benefits and a living wage all over San Diego. KIDDING!

After paying cash for the Mediterranean-style house with 61 feet of beach frontage, they asked San Diego County for dramatic property tax relief.

Romney, the presumptive GOP nominee for president whose wealth is estimated at $250 million, has rejected calls from Democrats and Republicans to release his income tax returns prior to 2010. But San Diego County assessor records shed light on one sliver of the couple's personal taxes during that time: a months-long effort to reduce their annual property tax bill. [...] As a result, the Romneys have saved about $109,000 in property taxes over four years. [...] The Romney campaign referred all questions about their La Jolla property taxes to Matthew A. Peterson, a lobbyist and attorney who helped the Romneys find the home. He has also guided them through the complex permit process for demolishing the home and rebuilding on the site.

Referring to their initial claim, Peterson said he did not know how the Romneys determined that their house value had fallen so dramatically, but he thought they may have been reacting to dismal news reports.

How dramatically did the Romneys' beach house value fall? It fell by 45 percent just eight months after they bought it, according to the Romneys!

Therefore, ergo, and QED, Mitt Romney is a terrible businessman. Would you trust a man to be CEO of US America Inc. if he can't even not pay 45 percent too much for his own beach house? It is just common sense.