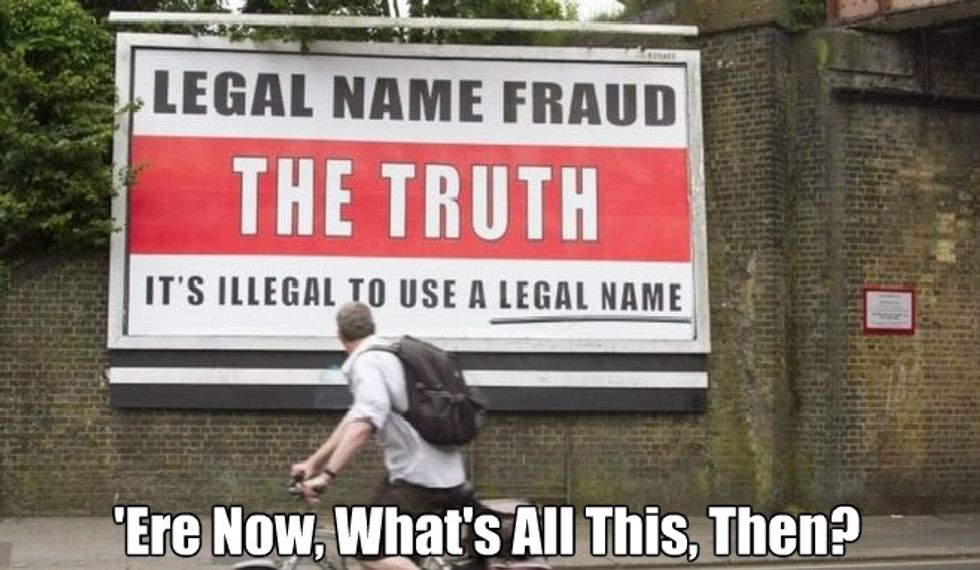 Is it scary that it's spreading, or reassuring we're not the only country with loons?

As the United Kingdom considers whether to leave the European Union this week, thanks to rightwing politicians freaking out about national sovereignty, we learn that our friends "across the pond" are also apparently afflicted by at least a few folks who want to stage their very own personal Brexits from the law, too. Billboards with a confusing slogan ripped straight from "sovereign citizen" pseudolegal gibberish have been mystifying people all over the scepter'd isle, which raises the perplexing question of just how someone goes about being a Sovereign Citizen when they're already the subject of a Sovereign. We have a feeling this is all going to end up with someone getting bitten by a Corgi.

Jon Kelly at the BBC investigated the billboards and their bafflegab:

The message is spelled out in bold capital letters. "LEGAL NAME FRAUD," it says. Then below: "THE TRUTH." And finally: "IT'S ILLEGAL TO USE A LEGAL NAME."

The first time I saw the 10ft by 20ft billboard near my flat in Kilburn, north-west London, I stopped and stared, completely baffled. What was a legal name, exactly? Surely to say it was illegal was an obvious contradiction? And who on earth was behind the advert?

I'm not the only one to have been left puzzled. A quick Google search revealed similar posters have appeared in Birmingham, Dundee, Essex, Gloucester, Grimsby, Guildford, Lincoln, Liverpool, Plymouth, Reading, Southport, Teesside and Truro, and in each the local press has reacted with varying levels of bemusement.

After some intrepid searching, Kelly found a site called "legalnamefraud.com," which is, as of Monday morning, displaying a "Bandwidth Limit Exceeded" message, so whoever set up the site has had far more traffic than they anticipated (or paid for). That's sort of what Donald Trump means when he says we'll be sick of winning. Before it vanished in a puff of unexpected popularity following Kelly's article, the site explained a British version of sovereign citizen name magic, outlining

a theory that when your birth was registered, a legal entity -- your legal name -- was created. But the legal entity "Jane Smith" is distinct from the actual physical person Jane Smith, the website says.

When your parents registered your birth on the certificate, it insists, they unknowingly gave the Crown Corporation ownership of your name. "Simply thus, all legal names are owned by the Crown, and therefore using a legal name without their written permission is fraud."

Like any good reporter, Kelly went to check whether this intriguing idea had any validity at all:

"Absolutely not. Absolutely none at all," says barrister, law blogger and lecturer Carl Gardner. "It's a kind of brew of pseudo-legal ideas. It's the equivalent of thinking Harry Potter is science."

So who's putting up all the billboards? You might think, from all the now-borked website's quotes from someone calling herself "Kate of Gaia," that the billboards might be connected to one "Kate Of Gaia," a Canadian who has a blog what explains "legal name fraud." Kelly got in touch with someone who may be Kate of Gaia, though he didn't say whether it was the individual, the person, the agent, or the settler. Whoever answered the email said they prefer to be addressed as "JANE DOE-755." When he asked if she was putting up the billboards, he got exactly the answer he should have expected if he's ever tried to talk to some moran in a comment section. "Jane" or "Kate" or the agent or the witchAY Woman

urged me to "google legal name fraud and read the essays like millions of others did....be a real journalist vs. a talking B-B.C. talking pair-rot" (sic). She didn't reply to my enquiry about who funded the billboard posters.

That brilliant wordplay certainly seems consistent with the postmodern insights into legal name fraud on the blog post, which explains (for a certain value of the word "explains"):

When pair-ents (two minds) or payer-rents choose to REGISTER their children, they are LITERALLY trading off the life source of the being that is SUCKED into that body in this reality for the whore of Baby-loans LEGAL NAME dead child, in essence, ADOPTING Satan’s child in LLEU of heaven’s child. The Laws-R-us effect, raising the dead NAME DEMON and razing the living consciousness you THINK of as YOU and every other human being as well as all sentient life in this reality. In short, YOU offer up your living child as a sacrifice to Satan while your living child commits sign after sign (sin upon sin) and ADOPT the dead LEGAL DEMON literally breathing life into evil with every creation thenceforth.

That's worth a rating of at least .87 TimeCubes of Internet Crazy (in Der net-craze, EEE!) right there.

Kelly explains that in Canada and England, the term of art isn't so much the American-style "sovereign citizen," but rather the

"Freemen-on-the-Land" movement -- a group of individuals who argue they are bound by laws only if they consent to them, often in the hope of escaping debts and criminal charges -- and the related "Sovereign Citizen" movement. In 2012 a Canadian judge issued a 192-page judgement dismissing Freemen-style arguments.

"Freemen on the Land" are further not to be confused with the "Fremen" of Frank Herbert's Dune series of novels, or with the "Wee Free Men" of Terry Pratchett's fiction. Both of those literary free people make some degree of sense, for one thing.

Kelly's attempts to confirm any actual links between Kate of Gaia/"JANE DOE-755" and the mystifying billboards ultimately proved unsuccessful, which means he is probably not a real journalist and is in fact a mere BBC pair-rot. At least he's not pinin' for the fnords. Still, you have to admire his diligence:

A search on Whois.net, which lists the registered owners of websites, doesn't reveal any information about legalnamefraud.com. On the similarly named legalnamefraud.org, however, the owner is listed as "Dohm Teewatt" at an address in Quebec, Canada. A Dohm Teewatt Twitter page includes lots of posts about "legal name fraud". An email address is also provided by Whois.net, but when I sent it a message I received a reply from a "D-ohm T-Wat" consisting of nothing more than Kate of Gaia's email address.

Rather circular there, and it doesn't prove a thing about whether the billboards are being paid for by Kate of Gaia. We did our own bit of looking and discovered -- big surprise -- that legalnamefraud.org is in fact still operational, and links to Kate of Gaia's identical wordpress site, although on legalnamefraud.org the author's identity is cleverly disguised as "kate of kaia."

Kelly was also stymied when he tried contacting a company that rents many of the billboards, which cited client confidentiality, and the Advertising Standards Authority, which said it had received seven complaints about the ads from people who "questioned whether it would lead law-abiding people into thinking they've committed fraud or a crime by having a name." Ultimately, the ASA decided there was no grounds for action since it was unlikely anyone would be harmed by the messages, which are perhaps too unclear to even be understood, let alone acted upon.

Still, says Kelly, whoever's shelling out what could be "hundreds of thousands of pounds" for the billboards has managed to win some "attention for a hitherto fringe theory." Not that anyone should take the nonsense seriously, which leads us to our favorite line from Kelly's piece. Attorney -- whoops, solicitor -- David Allen Green, who blogs as Jack of Kent, warns that it's "complete tosh," and no more valid in the UK than in the USA. Not even in Florida.

He adds: "It is nothing about law, and it is not harmless. Taking this daftness seriously can be legally dangerous. If people try to use such things to avoid their legal obligations they can end up with county court judgments or even criminal convictions. You may as well walk into court with a t-shirt saying 'I am an idiot'."

[wonkbar]a href="http://wonkette.com/601664/cliven-bundy-lawsuit-against-obama-demands-50-million-get-out-of-jail-free-card-and-a-pony" target="_blank">[/wonkbar]Whether British courts start seeing a bunch of crazily capitalized, incoherent filings from whatever might be their equivalent of the Bundy family remains to be seen. We can at least take some comfort from knowing they're not especially likely to have any heavily armed idiots plowing into their courthouses and shooting up the place with semiautomatic rifles. At the very least, British judges won't have to worry about these goofballs complaining about violations of their Second Amendment rights, which in their case they have not got.

We feel compelled to acknowledge that Yr Doktor Zoom's real name -- if such a thing exists -- is "Marty Kelley." He is not related to the BBC's Jon Kelly. But you'd expect us to claim that, now wouldn't you?