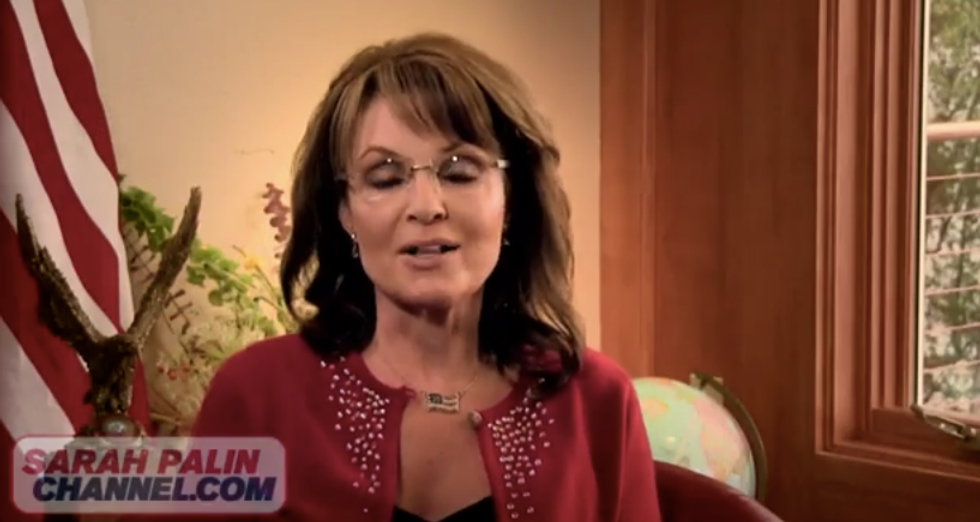 Sometimes, if you pray hard enough, dreams do come true. This is the case, luckily, even for dirty commie atheists like yr Wonkette, because today the Lord has blessed us with this offering: the launch of the Sarah Palin internet teevee channel juggernaut. Yes, for the low low price of only $9.95 a month or the extreme bargain of $99.85 per year, you can have all the Sarah Palin you could possibly desire.

Which one of you good Wonketarians will throw $100 at us so that we can watch this channel 24/7? Haha it will not be on 24/7 because Sarah is going to be the executive editor and oversee all content, which means that there will be like 10 videos at the start, all with varying levels of sicky-sweet-Sarah voice saying generally repugnant impeachy things with a weird frozen smile, and then she will get bored and the channel will have original content about once a week whenever Sarah feels like filming the ever-growing brood of illegitimate grandkids or something.

OK, just to humor Sarah, let's listen to her down-home explanation of how she will step outside the lamestream media and build a media empire.

Tired of media filters? Well, so am I. So, let’s go rogue together and launch our own member-supported channel! This will be OUR channel, for you and for me, and we’ll all get to call it like it is.

Need we mention she launched this hot new media property on Facebook, because that is the only social media network that is populated by millions of Sarah Palins. Your angry email forwarding uncle is SO HAPPY right now. He's already ponied up his $100 for the year, which is going to suck so bad when this thing folds in 2 months.

Right now the website is VERY fully-realized. You can definitely tell that so much thought went into this launch. Theres's a whole bunch of YouTubeness of previously recorded Sarah's Greatest Hits. Oh, and white space. Lots and lots of white space. There's one of those embedded widget national debt counters, which is a thing one usually finds on personal blogs, not famous ex-half term governor attention whores who have somehow found enough suckers willing to be parted from their money to finance a whole internet television venture.

No word on whether or not this exciting multimedia presentation sneak peek Sarah Palin up close and personal behind the music videopalooza means that she will no longer be providing her incisive commentary on Fox News. Probably not, because that would require Sarah to do something like 3 or 4 things per month with a reasonable amount of consistency, which seems out of the question.