Oh Hell, Let's Liveblog Sean Spicer Emerging From The Bushes And Stepping On His Dick 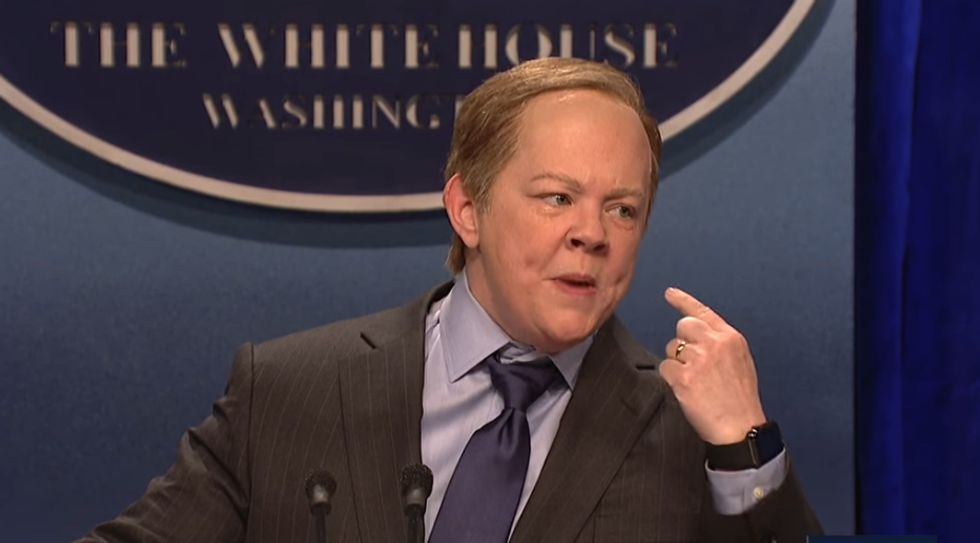 Oh hey, Press Secretary Sean Spicer is back from getting his grundle professionally cleaned or whatever, so he's doing the White House press briefing! DO NOT CRY BECAUSE YOU MISS SARAH HUCKABEE SANDERS. That would be very stupid!

Let's watch this dumb shit together:

1:48: TIME FOR QUESTIONS! All you have missed is Spicey reminded everybody to be nice to their mama for Mother's Day. And in response to the first question, Sean Spicer is NOT answering any questions about James Comey or Trump's dumbass tweet threats or anything like that.

1:50: Spicer says Trump did NOT command James Comey to kiss his ring or lick his bottom or anything like that. We call FAKE NEWS, because the Trump White House is a liar.

1:53: Question: Trump threatened to cancel White House press briefings. Is Spicer about to be fun-employed?

SPICER: The president is very frustrated that you do not accept our constant lying as gospel.

1:56: Spicer says it's OK for Trump to ask the FBI director if he's under investigation because "Alan Dershowitz."

1:58: Question: No for real, we are going to keep asking if Trump really records people in the White House on "tapes."

SPICER: Seriously, do you think any human can defend that shit? No comment.

2:00: Spicer says Trump REALLY REALLY REALLY wants the Russia investigation finished with integrity, even though it is a FALSE NARRATIVE that has been DEBUNKED as FAKE NEWS. That is the "nut" of this, Sean Spicer really just said with his mouth.

Spicer does not know. Hey remember this morning when Trump tweeted that you shouldn't trust his spokespeople, because the president is so "active"? Hahahahaha, that was rich.

2:04: SERIOUSLY, Spicey is a sleepy ZZZZZZ boy today. Did somebody put a bunch of Valium in his cinnamon gum?

UH YEAH NO, CHUCK GRASSLEY, YOU ARE HEREBY INVITED TO GO FUCK YOURSELF.

Also, that's not what Dianne Feinstein, the highest ranking Democrat on the Senate Judiciary Committee, seems to think. Wonder why stupid Chuck Grassley is not on the same page?

2:08: Question: Why does this White House keep lying about what James Clapper said about whether or not there is collusion between Trump and Russia?

ANSWER: NO RUSSIA, NO RUSSIA, YOU ARE THE RUSSIA. Also, this White House plans to keep lying about it.

2:11: Question: Seriously, Trump tweeted that you guys are wrong a lot. Do you just stand there and lie all the time?

Spicer: We get to work very early in the morning, because it takes A LOT OF WORK to lie so hard at you people. Do you not see how tired we are, from all our hard work of lying?

2:14: Some dork journalist asked about something not related to Trump and Comey and "wire tapps." What a dork.

2:15: Question: Did Sean Spicer have to do a loyalty test for Donald Trump?

Spicer: WHAT HAVE YOU HEARD?

Aw, fiddlesticks, he is leaving us! Why must he tease us with these brief visits? Where is Sarah Huckabee Sanders? Are you there, God? It's Wonkette, and shit is all fucked up.

Anyway, tip your bartenders, by clicking all the "donate" buttons below!