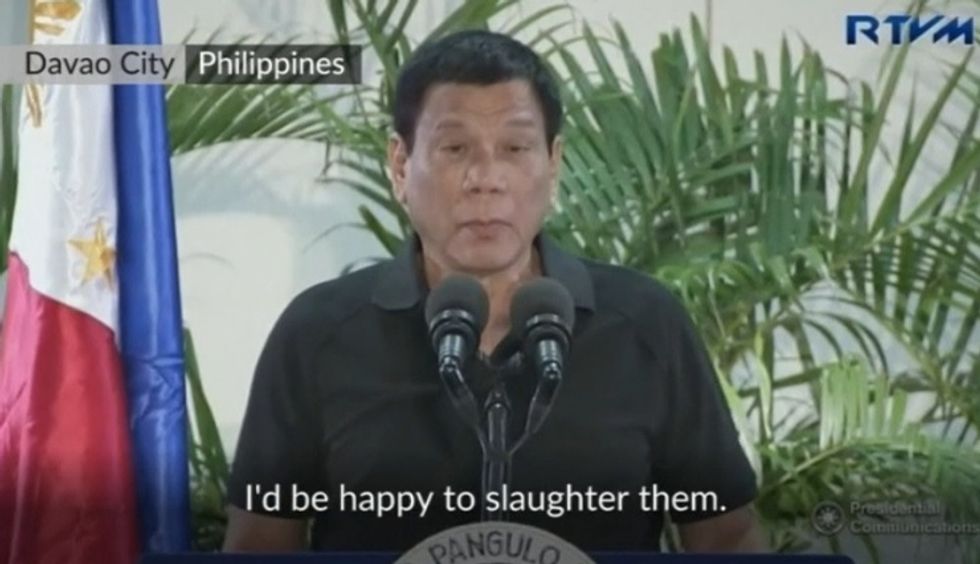 Big faces = strong men. This is simply a fact.

Isn't it sweet when one autocrat falls head-over-heels for another? At least when there's not a literal beheading involved? Donald Trump apparently has a new dictator to love, after an "animated" call Thursday night to Philippines President Rodrigo Duterte, who's been pursuing a murderous campaign against drug dealers, anyone who might be a drug dealer, and anyone who might be standing near someone who may once have talked to a drug dealer's sister. Apparently the two hit it off just fine, and Trump invited Duterte to come visit the White House sometime, according to Duterte aide Christopher Lawrence "Bong" Go. It is not known whether Trump was informed of Mr. Go's nickname; we'll assume not, since Trump has so far not said anything unspeakably embarrassing about it.

President Duterte has been increasingly critical of the United States' relationship with the Philippines, particularly since U.S. officials, including President Obama, seem not to be big fans of Duterte's attempt to fight a drug war with actual free-fire zones, massacring everyone with even the most tenuous or rumored connection to the drug trade. Estimates of extrajudicial killings are nearing 5000 deaths, and earlier this week, Duterte warned human rights groups that if he had his way, he'd be happy to kill human rights monitors, too, since they get in the way of killing drug dealers and addicts. Not surprisingly, many of Duterte's supporters are delighted he's "doing something" about drugs, even if the body count may be far higher than the number of addicts in the country. Gotta Git Tuff -- so you can see why Trump would be attracted to the murderous thug.

Mr. Go said Duterte had invited Trump to visit the Philippines next year when the country chairs the Association of South East Asian Nations (ASEAN); U.S. presidents commonly attend ASEAN meetings. In turn, Trump had invited Duterte to come visit at the White House. It was not specified whether Trump promised to take Mr. Duterte to any crime-ridden areas in the U.S. for some target shooting.

Filipino news agency GMA News Online indicates that during the campaign, Trump had criticized Duterte's comments about the U.S. and President Obama, like when Duterte called Obama a "son of a bitch" (or "whore," depending on your English/Tagalog slang preferences) saying they demonstrated "a lack of respect for our country," but that more recently, Reuters reported that a

source who has advised Trump's transition team on security policy told Reuters last week that Trump would start a "clean slate" with the Philippines.

"He is perfectly capable of talking to Duterte in an open way without being wedded to previous policy failures," the source said of Trump.

[wonkbar]<a href="http://wonkette.com/607113/filipino-donald-trump-ok-with-being-called-hitler-as-long-as-he-slaughters-the-right-people"></a>[/wonkbar]It remains unclear whether President-elect Trump actually knows anything about the Philippines, like whether the country is closer to Hawaii, Puerto Rico, or the Two Corinthians, or even how to pronounce "archipelago." The one thing Trump does "know" about Philippines history is a complete myth; namely, his much-repeated but utterly apocryphal story about how U.S. General Pershing ended a Muslim insurgency by dipping bullets in pigs' blood, killing 49 rebels, then letting one to take the remaining bullet and tell his comrades what Pershing did, thus ending the rebellion. It's total bollocks, but the sort of bloody myth that excites Trump's inner 12-year-old boy, and sounds really neat. So it's nice to know Trump is now rather enamored of a guy who's proud of being compared to Hitler, if only he really could slaughter all 3 million of the Filipinos he says are drug addicts.

The prospect of a Trump-Duterte meeting is similarly mind-boggling; Duterte may offer Trump some tips on how to hide the bodies, and Trump may in turn give Duterte advice on hiding his financial entanglements. Together, they could commit some truly appalling massacres; Yr Wonkette urges the saner aides to both men to instead divert themselves with a literal pissing contest, using a secret basement wall in the White House that Teddy Roosevelt used to challenge his rivals to make a higher mark on.