Oh, Jeff Sessions Met With Russian Ambassador During Campaign, Then Lied? Is That A Big Deal? 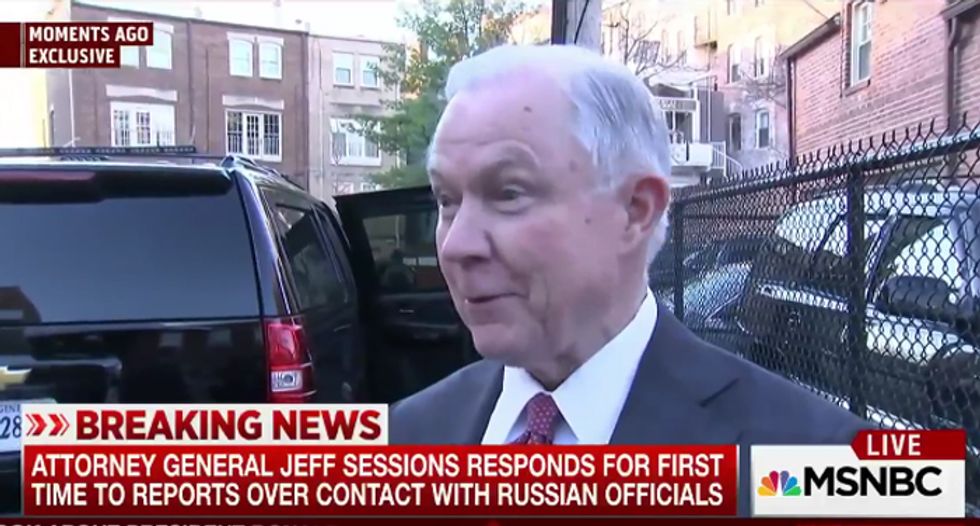 It looks like the Trump-Russia fuck-tussle is officially transitioning into the important Shit Hitting the Fan stage, as the Washington Post reported Wednesday evening that Attorney General Jefferson Beauregard Sessions III met twice during the campaign with the Russian ambassador, then said during his confirmation hearings, in answer to both oral and written questions, that he hadn't ever spoken to no Russkies, ever. The official Trump line on all this is apparently to claim it's a big nothingburger, since Sessions was definitely meeting ambassador Sergey Kislyak while wearing his "member of the Senate Armed Services Committee" hat, not his MAGA hat, and also all the fuss over this is simply a plot by Barack Obama loyalists to step on Trump's hugely successful speech Tuesday night.

What we are saying is, it's another week of the Trump administration.

Hey, if Mike Flynn had to resign for lying about talking to Russia, will Jeff Sessions? Hahaha, only on Normal Earth, not here on Trump Earth.

So here are the basics: While he was was an advisor to Donald Trump's campaign on foreign policy, explaining in small words that we can't just nuke countries where Trump doesn't have golf courses, the future attorney general had two meetings with Russian ambassador Kislyak, one in July during the Republican National Convention, and another in September, in Sessions's office, at the same time Russian intelligence services were diddling the American election as hard as they could. Then, during his confirmation hearings to be attorney general, Sessions explicitly denied he'd ever had any contacts with Russians, no way. During oral questioning, Sessions answered a question by Senator Al Franken about what he'd do as attorney general if he learned members of the Trump campaign had met with Russian officials. Instead of answering that hypothetical, he went ahead and said he had no knowledge of such meetings, and volunteered that he had certainly not met any Russians at all:

“I’m not aware of any of those activities,” he responded. He added: “I have been called a surrogate at a time or two in that campaign and I did not have communications with the Russians.”

Several of the President-elect’s nominees or senior advisers have Russian ties. Have you been in contact with anyone connected to any part of the Russian government about the 2016 election, either before or after election day?

Sessions had a really short answer to that one: "No."

Sessions's spokesperson, Sarah Isgur Flores, didn't deny that Sessions had met with the Russian ambassador, but insisted "There was absolutely nothing misleading about his answer," because Sessions thought he was being asked about meetings he may have held as a member of the Trump campaign, not as a senator, which pretty much made him two different people:

“He was asked during the hearing about communications between Russia and the Trump campaign — not about meetings he took as a senator and a member of the Armed Services Committee,” Flores said.

Flores pointed out that he'd met with a whole bunch of foreign types as a top guy on Armed Services, including conversations with 25 foreign ambassadors, Kislyak among them, and so there's really nothing to worry about. You gonna make a big deal about Sessions meeting the British and German ambassadors, too? A Justice Department official who defended Sessions said of the September meeting with Kislyak, "There’s just not strong recollection of what was said." QUIET ROOMS -- let's not make a big deal about it.

Just to prove it had done its homework, the Washington Post noted that it had contacted all 26 members of the Senate Senate Armed Services Committee to see if meetings with the Russian ambassador were routine for people on that committee, and of the 20 who responded, none had met with Kislyak in the last year, wearing a hat or otherwise.

“Members of the committee have not been beating a path to Kislyak’s door,” a senior Senate Armed Services Committee staffer said, citing tensions in relations with Moscow. Besides Sessions, the staffer added, “There haven’t been a ton of members who are looking to meet with Kislyak for their committee duties.”

That's pretty interesting! But maybe all it proves is that Jeff Sessions works harder for the committee than those other slackers.

Moments ago Jeff Sessions responded to reports on Russia. pic.twitter.com/iZKIsSPDpX