Oh Look Some Bundy Ranchers Did A Vegas Spree Killing, For Freedom 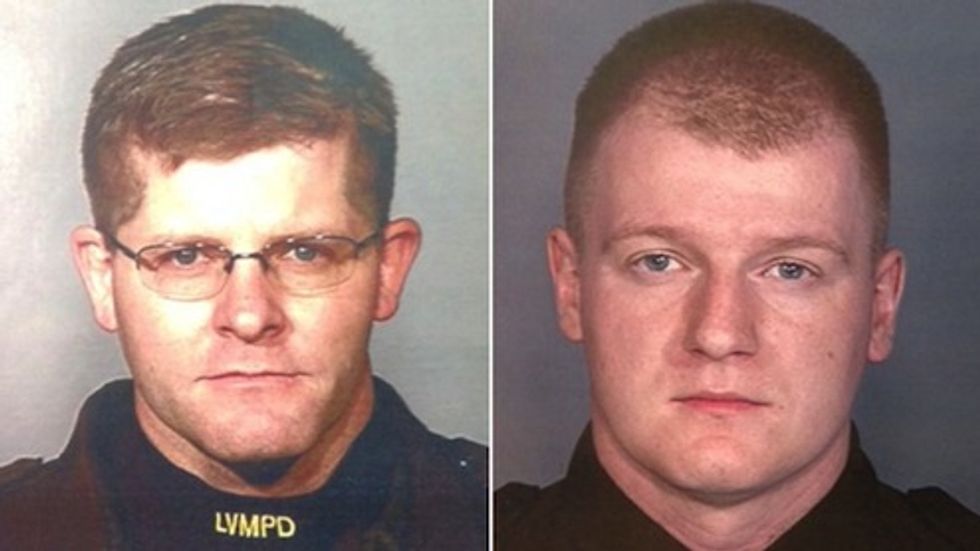 Here, let's catch you up on the Vegas spree killing, apparently perpetrated by two lone wolves who in no way reflect on the rightwing extremists who aren't terrorists (because they are white):

The events began about 11:30 a.m. Sunday at the CiCi’s Pizza at 309 N. Nellis Boulevard when the two armed assailants ambushed [Alyn] Beck and [Igor] Soldo, who were eating lunch.

After shooting the officers and taking their firearms and ammunition, the assailants made their way across Stewart Avenue to the Wal-Mart at 201 N. Nellis.

There, the assailants shot and killed a person inside the front door of the store.

Police arrived to the busy store as customers began fleeing through the exits. The assailants exchanged gunfire with police before the female suspect shot the male suspect and then killed herself in an apparent suicide pact, according to [Sheriff Doug] Gillespie.

We are sorry, Vegas, but sometimes the tree of liberty must be watered with the blood of a couple cops eating their lunch and some lady* who went to Wal-Mart probably to pick up a case of Pampers for her grandson along with a 50-inch $19 TV. (We have no idea why the lady* was at Wal-Mart, but we are pretty sure that is how Wal-Mart works.)

Residents who spoke about the assailants all mentioned the couple's relationship with Bundy.

Oak Tree resident Sue Hale said the two told her they were in Bunkerville during the standoff, which occurred in April after federal authorities began conducting a roundup of Bundy’s cattle. Bundy had defied the government by grazing the cattle on public land without a permit.

But was it a revolution?

Larry Hadfield, a Metro spokesman, said one of the suspects yelled, "This is a revolution” during the incident.

Also, apparently some sort of bomb went off at their apartment, whether detonated by police or super-awesome patriot spree-killers still unknown.

Is it faaaaaair to paint all Cliven Bundy's superpatriot friends with a spree-killing cop-killers' "revolution" brush? Not if you are DHS putting out a report on rightwing terrorists, it isn't. After all, lone wolves gonna lone wolf; and people trying to kill the government has absolutely nothing to do with calls to kill the government. What are you, A Idiot?

*Not a lady. Joseph Wilcox, 31, has been identified by the Las Vegas coroner as the victim inside Wal-Mart.