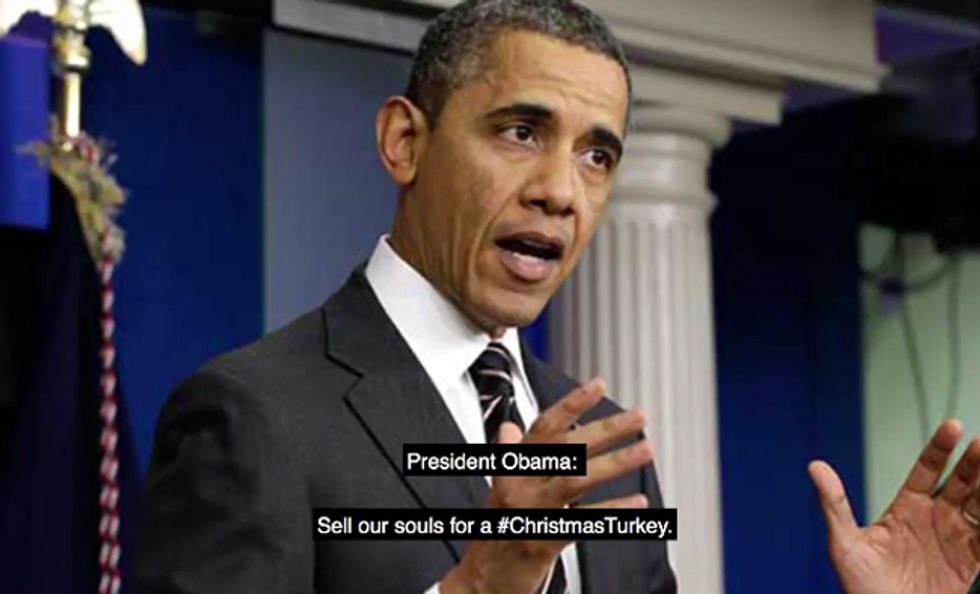 The special election for Georgia's Sixth Congressional District is TODAY -- be sure to round up all your illegal alien friends and make sure they vote for Jon Ossoff! (Tell them he's Colombian.) As you might expect in the last days of a hotly contested election that's going to be the most expensive House race ever, there's all sorts of last-minute fuckery going on -- beyond the fuckery we documented yesterday, even.

Take, for instance, this ad that seems to feature Barack Obama urging black Georgians to vote Republican. No, that wasn't a typo. The ad, designed for radio and Twitter, from pro-Trump super-PAC "Great America Alliance," starts out with Trump's African-American surrogate Autry Pruitt complaining about how Democrats only seem to care about black people at election time (the video version has shots of prominent Dems in the background):

It may seem out of season, but all of a sudden, Democratic politicians have started coming around again. We normally only see them every other November, swarming around and making promises to get our vote. But nothing ever changes for us, does it?

And then it's time for the pivot to a snippet of Obama reading from Dreams For My Father -- in the book, Barry's quoting a Chicago barber named "Smitty," but the ad doesn't bother with those details, and is content to let us think these are Barack Obama's own opinions:

Don't sell out for a #ChristmasTurkey. The time for change is NOW! #GaPol#GA06pic.twitter.com/DrKiwbUUVQ

Again, no context, because "context" is for elitists and snobs. The ad has Obama seemingly explaining how sick he is of Democratic politicians:

Plantation politics. Black people in the worst jobs. The worst housing. Police brutality rampant. But when the so-called black committeemen came around election time, we’d all line up and vote the straight Democratic ticket. Sell our souls for a Christmas turkey.

Then Pruitt closes out the ad with "let's not sell out for another #ChristmasTurkey," and you can almost hear the Twitter hashtag in his voice.

So those black voters in Georgia have got to be thinking "Golly! Barack Obama is right! I will now vote for Karen Handel, the Republican and former secretary of state with a long record of suppressing black votes! Or perhaps I will stay home, since The Man is oppressing me!" That, or they'll wonder just how stupid Republicans think they are, because it might occur to them that Barack Obama urging black people to distrust Democrats doesn't quite add up.

And wouldn't you know it, it doesn't: In the book, it's the early '80s, and Smitty the barber is telling new arrival to Chicago Barack Obama about how machine politics ran in Chicago before the election of Harold Washington, the city's first black mayor:

“Had to be here before Harold to understand what he means to this city,” Smitty said. “Before Harold, seemed like we’d always be second-class citizens.”

“Plantation politics,” the man with the newspaper said.

“That’s just what it was, too,” Smitty said. “A plantation. Black people in the worst jobs. The worst housing. Police brutality rampant. But when the so-called black committeemen came around election time, we’d all line up and vote the straight Democratic ticket. Sell our souls for a Christmas turkey. White folks spitting in our faces, and we’d reward ‘em with the vote.”

Oh! That's different! Nobody in that barbershop was saying they wanted to vote for a Republican, can you believe that? PolitiFact gave the context-free ad a big fat "Pants On Fire" rating for fibbing, although we should note that Autry Pruitt insisted to PolitiFact it was "absolutely in context on this issue [...] which is why we used it." This is because Autry Pruitt is lying.

We were even more impressed by this explanation from Eric Beach, the PAC's co-chair. He gave CNN a beautiful load of hooey, delivered with the oily sincerity of Dan Aykroyd's Irwin Mainway character, explaining

the ad was an “outside the box” attempt to show “creatively” the Democrats’ history with black voters.

For what it's worth, Obama adviser Eric Schultz condemned the ad's use of Obama's voice as "fraudulent” and a “shameful, indefensible tactic,” but what do you expect, he's just a sheeple on the Democrat Plantation. And for his part, Autry Pruitt says it's totally in context, he isn't telling black voters to stay home, and he simply wants to "get my fellow Black Americans to run screaming from lying democrats #christmasturkey[.]" He really thinks he's going to make #christmasturkey happen. It's not going to happen.

If Only There Were A Public Option... For Killer Stand-Up!

Also, just to prove that behaving like duplicitous fuckwits isn't limited to pro-Trump super-PACs, we learn that former Florida Congressman Alan Grayson -- who had literally one brilliant moment and then went weird quickly -- is raising money for himself while invoking Jon Ossoff, the actual Democratic candidate in the Georgia race. Grayson's ActBlue page proclaims, "Make Trump Angry - Support Jon Ossoff" and gives you the chance to help out Jon Ossoff -- with half the donation you'd be making if you went to Ossoff's real campaign page.

But it's not actually deceptive! See, right there in small print above the amount buttons? It says right there: "NOTE: Your contribution will be divided evenly between Jon Ossoff and Alan Grayson." So not misleading at all. It even gives you the option to change how your donation is split, which could make for a fun scenario where you used Grayson's parasite fundraiser to send 100% of the money to Ossoff. We're not at all sure whether that would end up with Grayson paying the 3.95 percent processing fee to ActBlue, but even if it didn't it might send Grayson a message about trying to piggyback off someone who's actually running for a thing. What a jerk.

Yr Wonkette is supported by reader donations. When you click the "Donate" linky, your Ameros go to keep Wonkette full of snark, booze, and adorable baby pictures.