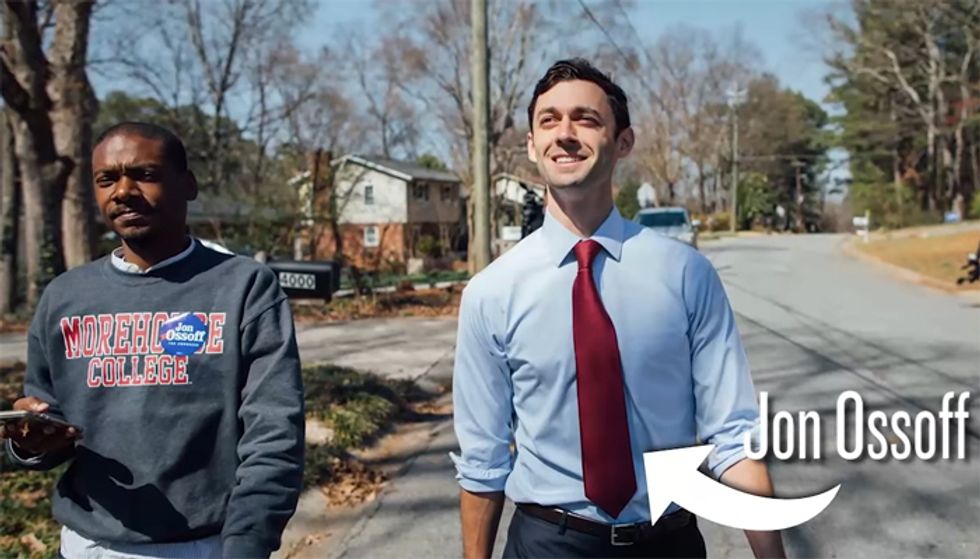 Well, folks, SOMEBODY in the GA-06 special congressional race seems worried, and that SOMEBODY is noted dickhead wingnut Karen Handel, the anti-choice zealot who lost her job at Susan G. Komen For The Cure because she wanted to strip money from Planned Parenthood that pays for BREAST CANCER SCREENINGS. She has principles, you see, and she wasn't going to let dirty abortionists trying to fight breast cancer get in the way of her important job, which was fighting breast cancer. She's a real champ, that one.

Handel is running neck-and-neck with sweet fresh-faced Democrat Jon Ossoff, or if a recent SurveyUSA poll is to be believed, he's seven points AHEAD of her, in this traditionally very red district, which used to be represented by asshole wingnut Health and Human Services (HHS) Secretary Tom Price. So it's time to bring in the big guns, especially since the election is just a few weeks away on June 20. Unfortunately for Handel, her "big guns" are an attack ad from a Republican super PAC called the Congressional Leadership Fund, which reveals that Jon Ossoff is just a common Kathy Griffin who cuts the president's head off and takes pictures of it. The horrors!

Actually the ad is fucking hilarious. Here is the video and text (and also some snotty annotations from yours truly), so you can get scared of the LIBERAL EXTREMIST KATHY GRIFFINS and change your mind about voting for Mister Sexxxy Buns Jon Ossoff:

IT'S NOT FUNNY. [More marching pictures, with the text "THEY WANT OSSOFF."]

These ANGRY LIBERALS will go to ANY EXTREME to elect Jon Ossoff! [Like smashing windows or burning cars or Kathy Griffin-ing or even VOTING, which Karen Handel DOES NOT LIKE.]

There's a reason why 95% of Ossoff's campaign donors are out of state liberals! [Picture of SCARY Nancy Pelosi poster on GAY SAN FRANCISCO BRIDGE where people with SAN FRANCISCO VALUES drive back and forth from SAN FRANCISCO to BECOME GAY.]

HE'S ONE OF THEM! [One more picture of Kathy Griffin, just in case you missed it.]

Whew! Thank goodness we have all seen this campaign ad, and have learned that Jon Ossoff is a TRUMP-MURDERING SHE-WITCH who used to play Vicki on "Suddenly Susan," whereas Karen Handel is a nice innocent lady who will stand up for your right to die from breast cancer while protesting an abortion clinic.

Response from the Ossoff campaign:

“Karen Handel should immediately demand this ad be pulled before any more children have to see these disturbing images on TV.”

Oh shit. We think he might win, you guys. Why don't you go put some money in his sexxxy campaign war chest, to help him across the finish line!