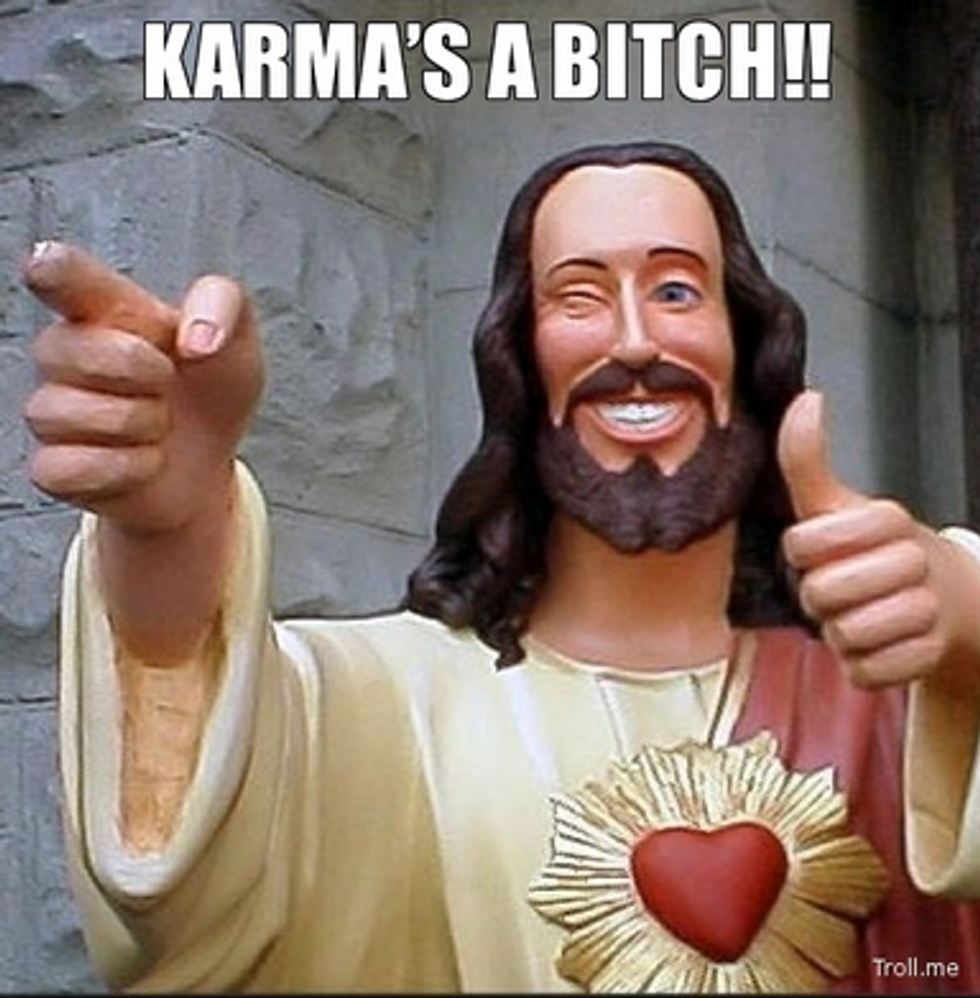 Maybe this is happening because Jesus hates you.

Oh no, Josh Duggar has strayed from his Christian marriage by getting on the internet to find strange hoo-ha to dip his Duggar Stick into, and the Family Research Council, AKA the Southern Poverty Law Center-designated "family values" hate group where Duggar used to work before the world found out about how he did Bible Diddles to his sisters, is SO VERY DISAPPOINTED. Because culture warriors, you see, are sinless (mostly) men, who have never been caught doing the very same things they preach against and demonize, no not ever, no way, that's just your imagination. These are Jesus's personal BFFs!

FRC head Tony Perkins, whose name hasn't been found in the Ashley Madison database so far (just don't hack Grindr LOLOL, not that he would ever be on there), expressed his morally superior outrage at his former underling in a statement:

"Last night we learned from online reports about allegations concerning Josh Duggar and then read his confession today. We are grieved by Josh's conduct and the devastating impact of his pornography addiction and marital unfaithfulness," Perkins wrote. "Our hearts hurt for his family, and all those affected by Josh's actions."

Perkins continued by stating that Duggar and everyone else who advocates for traditional family morals should be held to a "higher standard."

"His deceitful behavior harms his family, his friends, his former coworkers, and the cause he has publicly espoused," Perkins asserted. "Those of us who advocate for family values in the public square are held to a higher standard, and Josh's failures serve as a painful reminder of the destructive effects of not living with integrity. We are praying for the family."

Oh please, there are more sex secrets in the Family Research Council offices than there are brain cells. And let's not pretend this hasn't happened before at the FRC, because it totally has. Does the name George Rekers ring a bell? What about the phrase "lift your luggage"? If you were not borned yet in 2010, let us remind you about that one time this Rekers dude, who was a founding board member of FRC and also one of the fathers of the "ex-gay" movement, got caught hiring a Florida gay fuckboy to "lift his luggage" on a trip to Spain:

“The pictures on the Rentboy.com profile show a shirtless young man with delicate features, guileless eyes, and sun-kissed, hairless skin. The profile touts his ‘smooth, sweet, tight ass’ and ‘perfectly built 8 inch cock (uncut)’ and explains he is ‘sensual,’ ‘wild,’ and ‘up for anything’ — as long you ask first.”

That's about "Lucien," the one what Rekers hired, because he's just a feeble old man who needs a strapping, uncut young buck to carry things for him when he goes to Europe. At first Rekers REALLY tried to act like he was just looking for above-the-waist assistance and simply misunderstood what was meant by Rentboy.com -- maybe I could find a young man to trim back this shrubbery! And he actually said that with Boys Like That, what he really wants to do is get them to fall in love with Jesus so they can fall out of love with hot hard cock (you can love both, SCIENCE FACT), but then suddenly "Lucien" was spilling the jizz about how he had to rub that old coot's wang this one special way:

Rekers allegedly named his favorite maneuver the “the long stroke” — a complicated caress “across his penis, thigh… and his anus over the butt cheeks,” as Lucien puts it. “Rekers liked to be rubbed down there,” he says.

Right. Not only was this dude secretly getting his "luggage lifted" by dude-hookers, he was PICKY AND DEMANDING about it. Anyway, that guy and Tony Perkins go way back, don't know if they've ever been to Spain together though.

And was Rekers an isolated phenomenon, among an otherwise unimpeachable movement of men and women who love Jesus and fuck their wives, but only when they want to put babies in them? The fuck you say! How about Ted Haggard and his homogay meth massages and toe-tappin' Sen. Larry Craig and Sen. David "Huggies" Vitter and former South Carolina Gov. Mark Sanford "hiking the Appalachian trail" and Tennessee teabagger Rep. Scott DesJarlais trying to make his secret lady friend abort his love child and ... guys, we could go on!

So fuck right off, Tony Perkins. Every one of you deserves this, so much.