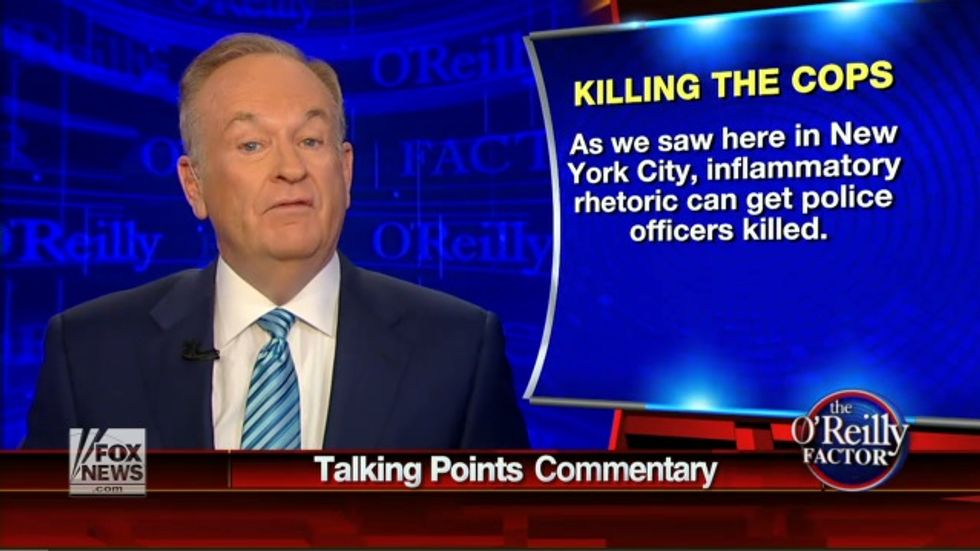 Bill O'Reilly would just like to see a little more responsibility on the part of the media in how they cover sensitive issues, because as he's recently discovered, language can have consequences! In a piece on the shootings of two police officers in Ferguson early Thursday morning, O'Reilly explained the link between violent words and violent deeds: "As we saw here in New York City, inflammatory rhetoric can get police officers killed." You know, violent rhetoric like telling your black son that he needs to be extra careful around the police, or saying that police shouldn't be shooting black people quite so often.

Surprisingly, unlike some of his Fox News pals, O'Reilly didn't claim that the Ferguson cop shootings were inspired by the overheated rhetoric of the Justice Department's Ferguson investigation. Rather, he found the real reason the cops got shot in Ferguson: because of ignorant people like rapper Method Man, who said on MSNBC that the shootings may have been related to the substance of what the DOJ found in its report:

METHOD MAN, RAPPER: This thing that happened I guess in Ferguson just now with the two officers -- sad, very sad. I hate to say that FBI report kind of played into this and these things shouldn't be happening, but you reap what you sow, in a sense.

O'Reilly was just sickened by this Method Man character, probably because Billo, a natural actor, has never had any use for Stanislavsky:

So, according to Mr. Method Man, because the FBI did an honest investigation, supervised by Attorney General Eric Holder, the two police officers reaped what they sowed? That kind of colossal ignorance drives violence and the NBC anchor sits there and says nothing? Good grief [...] And it is the job of the press to expose the haters, not lump them in with legitimate protesters. Right now, that job not being done.

So apparently, Mr. O'Reilly is willing to at least acknowledge the possibility that extreme rhetoric, like "black lives matter" can lead to violence. On the other hand, other kinds of rhetoric, as Billo knows quite well, are mere words, as insubstantial and incapable of causing violence as a spring breeze.

Like when you call someone "Tiller the Baby Killer" on 28 separate occasions and then someone goes and shoots the guy -- that's merely free speech, and nothing Bill O'Reilly ever said, like comparing George Tiller to Dr. Mengele, could ever be seen as possibly inciting violence against the man, what are you, crazy? For one thing, George Tiller wasn't even a policeman, and for another, his murderer was neither black nor an anarchist, so you leftists just shut up already and stop being such a hypocrite.