Oh Thank God Here Is Your Nice Time At Last 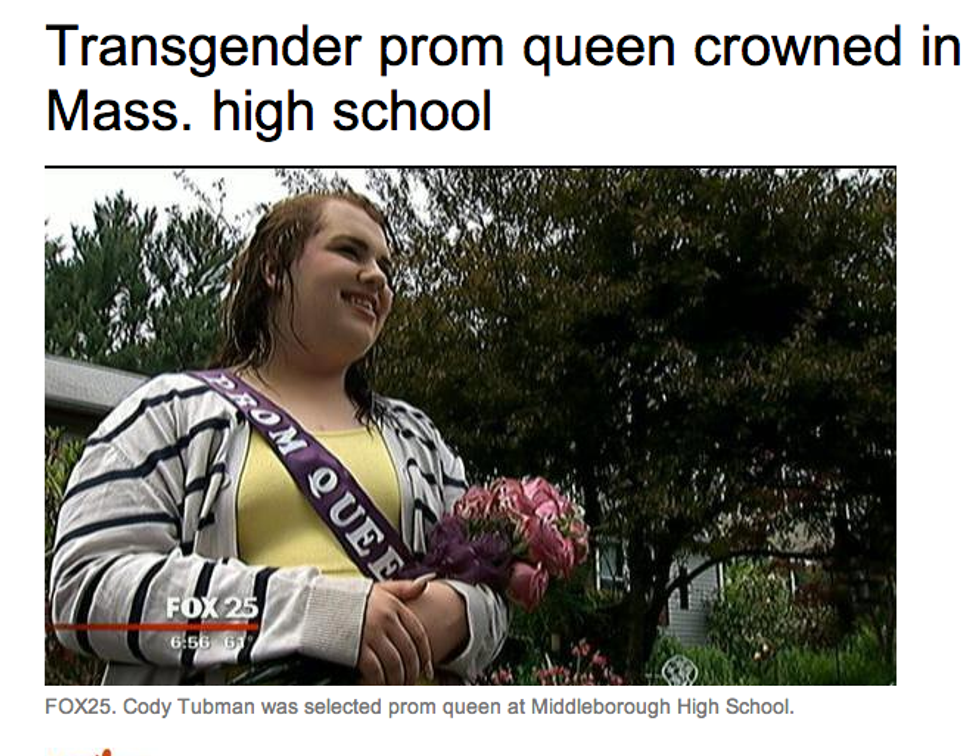 Today has been a real kick in the nads, huhErick Erickson? It has been all dead babies and rats on prisoners' leashes and Hitler and Democrats voting for guns. Well, after scouring and scouring the Intertubes to find something that would not put your head in the oven, we have found one at last: "Transgender Prom Queen Crowned in Massachusetts High School." Thank you, MSN, that will do nicely!

Cody Tubman, who was born a male, was selected prom queen by her classmates at Middleborough High School in Massachusetts.

A Massachusetts teenager who became her high school's first transgender prom queen says she hopes she'll be an example for others.

"People need a leader and someone to look up to and someone to help them through the process themselves, so I think I could do that," Cody Tubman told Fox 25 News.

Tubman was the belle of the ball Tuesday as she proudly wore her tiara after being selected prom queen by her classmates at Middleborough High School in Middleborough, Mass.

"It was surprising and it was exciting, 'cause I was like, we're coming really far," Tubman told the TV station.

Tubman, who was born a male, "came out" her freshman year to her mother, Tammy.

"I leaned over and I gave him a big hug," Tammy Tubman told Fox 25.

Cody started dressing as a female around her sophomore year. The school was accommodating, allowing her to use the girls' bathrooms and lockers.

Also, she is a big girl, so that's even nicer!

What's even nicer than that? That prisoners pooing in plastic bags isn't the last story you'll see today, while mama leaves you all to get her tuneup.