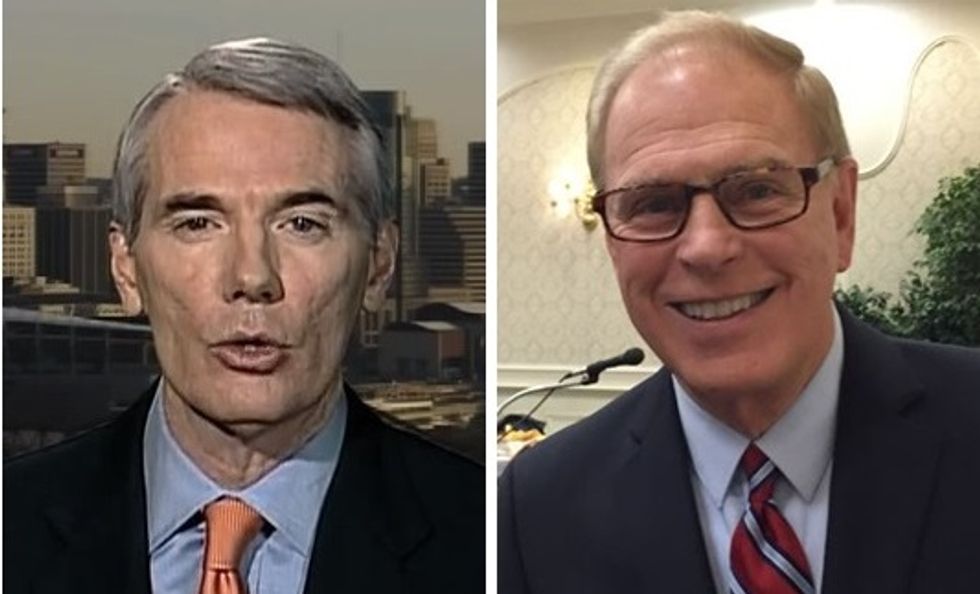 Also, no propane or propane accessories in this election

Our Senate roundup this week moves to Ohio ("The Land Of Burning Rivers"), yet another of the states in which Democrats have a fairly good chance of flipping a Senate seat that went Republican in the Great Tea Party Massacree of 2010. The Republican incumbent, Rob Portman, is one of those first-termers from the Class Of 2010, though he's not quite as high on the endangered list as Illinois Sen. Mark Kirk or Pennsylvania's Pat Toomey. Since Ohio is on so many politicos' lists of "2016 Races to watch," we figured we'd better give it a look. Sometimes you want to pay attention to the Internet; we heard a lot of good stuff about Jessica Jones, and that turned out to be worth watching, too. As far as we can tell, neither Portman nor his Democratic opponent, former congressman and Ohio Gov. Ted Strickland, has mutant superpowers, so we're already a little disappointed.

[wonkbar]a href="http://wonkette.com/506464/hero-sen-rob-portman-courageously-endorses-equal-rights-for-his-family-members"[/wonkbar]If there's anything Rob Portman is famous for (besides not being related in any way to Natalie -- yet another disappointment), it's his courageous decision in 2013 to start supporting LGBT rights after learning his son was gay. Everyone agrees that took a lot of courage, or at least a teensy bit more courage than, say, rending his garment and declaring "I HAVE NO SON," even though that may have won him the support of rightwing groups who grumbled about his betrayal of the traditional family. As we noted at the time,

When it was other people’s children having their rights restricted expressly because of their sexual orientation, our esteemed congressman was more than happy to support both a ban on gay adoption in D.C. and an amendment to the Constitution defining marriage as between a man and a woman.

But now, whoaaaa, there’s a gay Portman, and suddenly things are Just. Not. Fair.

Portman is also notable for the fact that he was briefly considered a possible running mate for Mitt Romney in 2012, during which election season we learned Portman had once popped a dislocated shoulder back into place all by himself, just like Mel Gibson in Lethal Weapon 2, albeit thankfully without any subsequent anti-Semitic rants or calling a female police officer "sugar tits." He also demonstrated an uncannily good impersonation of a chicken, which, while not a mutant superpower, must at least make him a big hit in the Senate Cloakroom:

Also, back in 2010, some Ohio Democrats ran an incredibly stupid ad campaign against Portman, posing shirtless to gripe about how as head of the Office of Management and Budget under George W. Bush Portman had robbed the shirts off their backs. No, it makes no fucking sense, even when you know it was a reply to a Republican ad mocking a shirtless photo of Democratic candidate Lee Fischer. It's a useful reminder that politics didn't just turn stupid this year.

Shortly before the R's took the Senate in 2014, Portman was among the first to promise he'd get right to the important business of passing a pointless bill repealing Obamacare, since up until then Republicans in the House had been having all the ineffectual fun. As a proud Ohioan, he felt obliged to send out a FIVE-PART Tweet protesting Barack Obama's tyrannical decision to stop calling that mountain in Alaska "Mt. McKinley." All the while, Portman stubbornly refused to be particularly interesting, just a reliable rightwing vote on everything but the gay stuff.

In the current campaign, Portman is predictably supportive of the Republican opposition to giving Supreme Court nominee Merrick Garland a hearing or vote, although he did meet with Garland, which makes him a "moderate." He described the meeting as "cordial" and went right back to the canned line that "the people" need to have input on filling the seat. Democrats had all sorts of fun citing a Portman quote from the 2010 race that "The Senate does have a solemn responsibility and that’s the confirmation of judges." but to be fair, the question didn't specify whether that still applied in election years when the president is Barack Obama.

Strickland said of Portman's automatic refusal to give Garland a hearing,

This is bigger than politics or parties -- it's about the the institutions of our democracy ... We cannot allow a seat on the Supreme Court of the United States to stand vacant for the sake of these kinds of crass political calculations.

Yeah, it's boilerplate on both sides. But at least now Strickland can make an ad featuring Portman making chicken noises.

Also of note: Even though Cleveland is hosting this summer's Republican National Convention, Portman's now planning on staying away from the convention as much as possible to avoid getting spattered with stray globs of Trump or Cruz. Instead, he's planning on holding a series of training sessions for campaign volunteers and working on a Habitat for Humanity house, anything to avoid being at the convention site. Portman, who backs John Kasich of course, says he had "planned this stuff long before we knew [the convention] would be so potentially contentious." Sure. Bawwk bawwwk bawwk.

At least Portman knows how to help Ohio businesses, an accomplishment he touts in this ad from March bragging about how he intervened to help Ohio-based ArmorSource bid for a Pentagon contract for helmets:

Except, oops, as Huffington Post points out, the ad doesn't mention that

ArmorSource paid $3 million to settle allegations that helmets it previously sold to the U.S. military “did not conform to contract requirements and failed to meet contract performance standards.” According to the U.S. Department of Justice, the helmets "failed ballistic safety tests.”

A whistleblower lawsuit alleged that ArmorSource delivered faulty helmets from 2006 to 2009. After problems emerged, the Army began recalling the headgear in May 2010. Troops in Iraq and Afghanistan that year were told to trade in their ArmorSource helmets for ones made by a different company.

It would be totally unfair to make this a campaign issue, of course, since as an ArmorSource spokesperson explained, these were two totally different contracts. Also, we should note Rob Portman did not personally make any faulty helmets for the Army.

Now, this Ted Strickland guy: the 2010 Tea Party eruption was a big deal for him too, in that he lost his reelection bid to John Kasich, who then went on to do all sorts of terrible Republican stuff to Ohio, like restricting abortion and generally being an asshole. In 2008, his name was briefly floated as a possible Veep choice for Barack Obama, but he said no way, because as a Midwesterner, he had to run his annual Cornhole Tournament, which of course Yr Wonkette had to go into great depth on, because cornhole for godssake. Strickland is an ordained Methodist minister, though he's never held a pastoral position. During the 2006 gubernatorial campaign, the idiot Republican running against him tried to suggest maybe Strickland was gay, because he had married his wife, Frances, too late in life and had no kids, which we're pretty sure is not really the definition of "gay." We looked it up.

Strickland ran a very close primary against P.G. Sittenfeld (brother of novelist Curtis, so thank god this story finally has a celebrity in it), during which the issue of gun control played a key role; Strickland was accused by Sittenfeld of being too soft on guns, noting Strickland's former "A" rating from the NRA. For his part, Strickland said he began "re-evaluating" stronger restrictions on gun sales following Sandy Hook, which was certainly a good time to rethink guns. Even if it was an election-year conversion, Strickland favors universal background checks and a ban on assault weapons, and is sufficiently in favor of gun safety that he picked up an endorsement from former Rep. Gabby Giffords, which also counts for something when it comes to guns (Sittenfeld was endorsed by actor Mark Hamill, who favors regulation of blasters). Not that anyone in Ohio has reason to think much about guns this weekend. Sen. Portman is a big fan of the NRA.

Strickland is a friend of higher education; while governor, he created the University System of Ohio, integrating the state's 14 state universities and 23 community colleges into a single system that resulted in higher enrollment statewide, yay. He also massively increased funding for the state's public schools, which is one of those things that apparently happens in some states. (We live in Idaho; we wouldn't know.) He gets generally high (but not perfect) scores from liberal interest groups like NOW (86%), the ACLU (72%) and Planned Parenthood (80%), so while he's no raving liberal, he's got the key advantage of being Not Rob Portman. He also does better in name recognition: Despite his being a senator for six years, a whopping 39% of Ohioans in a February poll said they didn't know enough about Portman to have an opinion of him. Worse, that number was 45% for independents. Rob Who? Luckily for him, Portman has a buttload of money from the usual conservative sources, though that might not help him much if the Republican presidential nominee is Donald Trump. In early March, Portman said he intended to support the Republican nominee "unless something crazy happens"; he has so far not explained exactly what would count as "crazy" enough to change that.

As of right now, Strickland holds a tiny polling advantage over Portman, who we're guessing isn't likely to get a huge electoral boost from his support of John Kasich, unless of course Kasich miraculously walks out of a contested convention (and isn't ripped to atoms by rabid Trumpers). In most hypothetical presidential matchups, Hillary Clinton and Bernie Sanders lead Donald Trump and Ted Cruz, so presidential turnout could make a huge difference in November. As would a good car chase.

Want to check the couch cushions and send Ted Strickland some Ameros? Here's his ActBlue donation page! And you can always help out Yr Wonkette with our 2016 coverage right here. Because we love you.