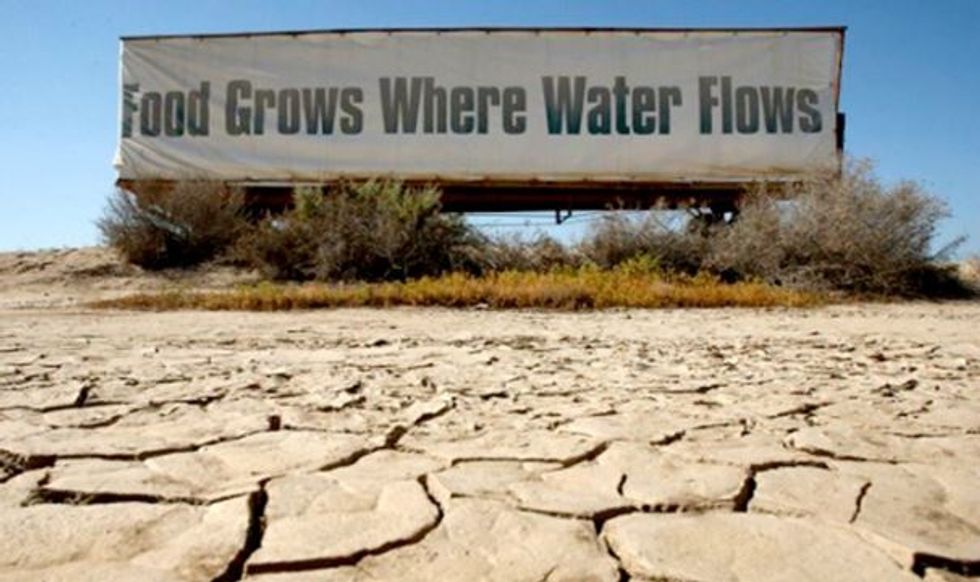 This story supported by a grant from the Patty Dumpling Endowed Chair for Oil and Chemical Spills, Fracking, and Groundwater Enhancement

You probably heard about this big drought in California, especially if you live there and you haven't washed your car for months because of rationing and stuff (as opposed to those of us who just don't wash our cars because we call road dust a "patina"). It's a seriously bad thing, and if your state is pumping so much groundwater that the ground is literally sinking in some areas, then you might just be a bit concerned about the San Fransisco Chronicle's investigation of oil companies pumping wastewater from drilling operations right down into Central Valley aquifers containing drinkable water. Legally, with permission from state regulators. Since 1983.

First off, the good news: So far, the state hasn't found any contamination of wells that are actually being used for drinking or agricultural water, although they did force the closure of 11 injection wells that were close to groundwater sources in use. But the injection operations have been pumping wastewater into aquifers that should be -- or at least should have been -- usable in the future. Now, not so much, unless you love the subtle tang that benzene adds to your morning coffee.

And in sad news for enemies of Big Government, it turns out that the federal Environmental Protection Agency has been instrumental in uncovering the bureaucratic screwup that led to the state issuing permits for oil drillers to pump their waste into potentially drinkable aquifers. The Chronicle explains where all that dirty water is coming from, and where it's going:

California produces more oil than any state other than Texas and North Dakota, and its oil fields are awash in salty water. A typical Central Valley oil well pulls up nine or 10 barrels of water for every barrel of petroleum that reaches the surface.

In addition, companies often flood oil reservoirs with steam to coax out the valley’s thick, viscous crude, which is far heavier than petroleum found in most other states. They pump high-pressure water and chemicals underground to crack rocks in the controversial practice of hydraulic fracturing. They use acid and water to clear up debris that would otherwise clog their oil-producing wells.

All of that leftover water, laced with bits of oil and other chemicals, has to go somewhere. Pumping the liquid — known in the industry as produced water — back underground is considered one of the most environmentally responsible ways to get rid of it.

It's not like you can just run the stuff through a giant Brita filter. Yes, we know we just disappointed some dude who was going to write to the EPA telling them he'd solved the problem. But oil companies are also supposed to only inject wastewater into strata that don't have drinkable water. Here's the problem: After the EPA turned over responsibility for enforcing the Clean Water Act to the state in 1983, state regulators allowed oil companies to inject crap into aquifers that should have been off-limit. Hey, thanks for returning power to the states, Mr. Reagan!

State records show that at least 464 wells injected oil industry wastewater into aquifers that should have been protected. About a third of those aquifers contain water that could be used for drinking or agriculture without a lot of treatment, while others were so salty that they would have needed a lot of treatment -- but still could have been made usable.

And even though the water wells that the state has tested have -- so far -- not shown contamination, the Chronicle also talked to Mike Hopkins, a grower whose cherry orchards, near Bakersfield, have become useless thanks to high levels of salt and boron in the water. He blames oil company injection wells for the crappy water quality, which made even new trees' leaves wilt and turn brown. The injection wells near Hopkins's property aren't among the ones that have been reviewed by the state and EPA; Hopkins is nonetheless suing four companies that ran the wells. Silly farmer, doesn't he understand that the petroleum industry's top priority is protecting the environment? We saw an ad on cable TV news that showed trees and polar bears, so we're pretty sure oil companies wouldn't lie about that.