Oklahoma Lawmaker Definitely Not Racist Against Muslim Islamics, Because Dictionary 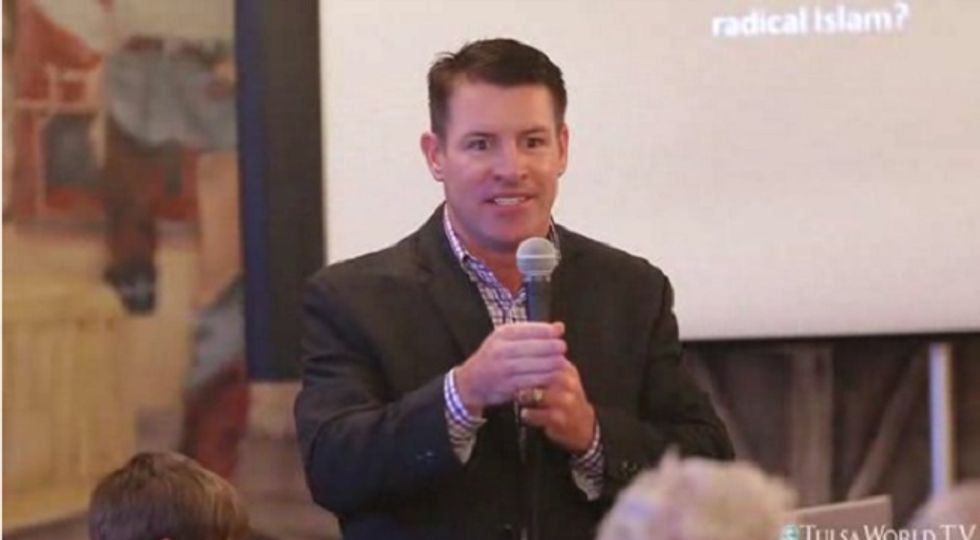 Oklahoma state Rep. John Bennett is just an ordinary America-loving guy whoresents being called a "racist" or an "Islamophobe" just because he tells the absolute undiluted truth about Islam, which is that it isn't really a religion, but is instead a social and political movement that is aimed at world domination and destroying western culture. Oh, and also, it's "a cancer in our nation that needs to be cut out." But he means that in a fact-based way, not a hateful or phobic kind of way.

The brouhahah (from the Arabic word Ba'rou HaHa meaning "fuck-tussle started by a xenophobic chucklehead") erupted after Sen. Bennett, a Marine veteran who served in Iraq and Afghanistan, posted a message (since removed) on his Facebook page calling on people to "be wary of individuals who claim to be Muslim American, be especially wary if you’re Christian.” He linked to a story about ISIS beheadings of two American journalists and explained a VERY IMPORTANT LINGUISTIC FACT:

Islam and Muslim are one in the same. They are adjectives describing their religion. Islam is the religion, Muslim is the person that follows Islam. If someone claims to be Muslim they subscribe to Islam (Quran). The Quran clearly states that non Muslims should be killed. Arab is the ethnicity, not Muslim or Islam. Be wary of the individuals who claim to be "Muslim American". Be especially wary if you're a Christian.

The Oklahoma chapter of the Council American-Islamic Relations (CAIR) asked for an apology, and Yr Wonkette agrees. We would further demand that Rep. Bennett either apologize for his inattention in English classes, or sue the school district he attended. Islam is a proper noun and is the name of a religion. The Quran is the holy book of that religion, and it is a title. Islam and Quran are no more synonyms than "Christianity" and "The Holy Bible." Muslim is also a noun, and refers to an adherent of Islam. The adjective he's looking for is "Islamic," in most cases, although "Muslim" is sometimes used as an adjective. Not that any of this has any relevance to Bennett's idiotic follow-up Monday night, in which he held a public meeting so he could repeat his weird grammar lesson and to explain why he's right, CAIR is wrong, and Muslims are all very dangerous. You may want to refer to the word salad in the following video, which you know has to be the truth, because he says he's telling the truth about Islam, "because the truth is, I'm speaking the truth":

Among the truths that Bennett shared were these:

Based on his scholarship in the field of grammar, we are inclined to ask for an independent check of Bennett's math.

“I’m going to talk about threat of ISIS, and the Muslim Brotherhood, and CAIR, which is right here in the state of Oklahoma.”

And they are, of course, all exactly the same, just like the Irish Republican Army and the Knights of Columbus are both Catholic groups.

“Is there a difference between moderate and radical Islam? I say, ‘No.'" As support, Bennett later said (in the middle of a completely different point):

So yes, if one Muslim says it, and he's a king, maybe even the King of all Islamic Muslims, then it is an unassailable fact, and you better not say that John Bennett is a simple-minded haboob. Now, here's the weird return to the grammar lesson, which immediately precedes that bit about King Hussein:

So what is the difference between Islam and Muslim? Islam and Muslim are both words used to describe the religion revealed to the [airquotes] "prophet Muhammed.” See, Islam and Muslim both have the same origin in the Arabic verb “salam.” Islam is the act of submitting to the will of the law, where as a Muslim is a person who participates in the act of submission to Islam. So what’s the correct use for it? Is it Islam or Islamic? Those should describe the religion — [airquotes] "which is actually the constitution” — in a subsequent cultural concepts, whereas Muslim should only describe the followers of the religion of Islam. Like I said before, they said, “Oh, Rep. Bennett, that guy on TV, he’s a bigot and a racist. He’s an Islamophobe." Well, if I’m an Islamophobe for speaking the truth about Islam, then you’re absolutely right. But I find it hard to believe. How can I be racist against Muslim or Islam when the ethnicity is actually Arab? This is kind of confusing.

See? it's very simple. Islam is the Constitution of Muslims, who are people who follow Islam, so it's not racist to say that Islam is a cancer that needs to be removed from America, because the ethnicity is Arabs, and he never said nothing about Arabs, just Muslims. EXCELLENT POINT! You're a bigot, but not, in this case, an obvious racist, because you never said a thing about ragheads or sand ni**ers. Give yourself a fucking gold star, buddy. We bet Martin Luther King would look down from heaven at you and say, "That bigot sure does hate Muslims, but I can't say for sure that he would be unfair to an Arab Christian. What a swell bigot he is."

You'll also be glad to know that Rep. Bennett's earlier Facebook post warning about the possibility of American Muslims cutting off Christian heads was defended by state Republican chair Dave Weston, who explained:

If we as Americans were ruled by Islam, then Christians and Jews like you and I could only keep practicing our faith if we paid a protection tax. But if you’re Christian or Jewish and don’t immediately convert to Islam, they imminently decapitate you. This is proven by ongoing observation around the world today.

Your move, Texas. Or Florida? How about Arizona? Maybe this is a job for Victoria Jackson...